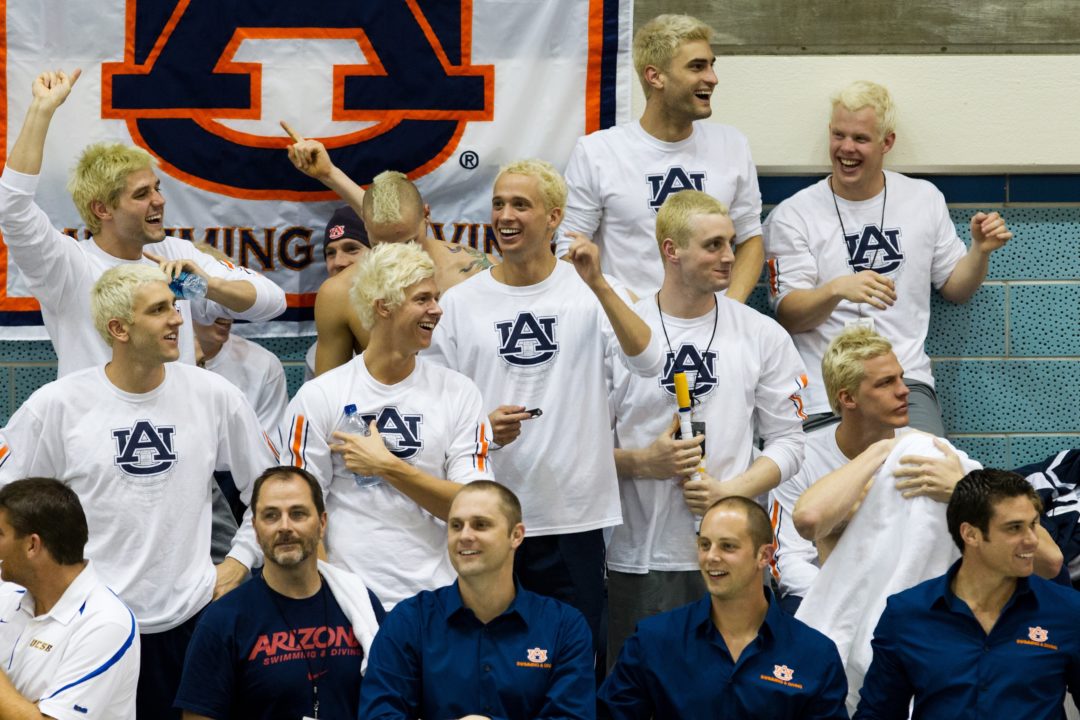 The Auburn men and women both picked-off the Texas Longhorns on the first leg of a Texas double this weekend, with the Tigers men finishing with a score of 166-132 and the women taking a much closer victory of 153-145 (with an exhibition in the final relay of the meet). Auburn will next be in action on Saturday as they’ll head just east to College Station and swim against the Texas A&M Aggies.

Auburn got off to a great start in the medley relay with a 1:27.43 to easily win the 200 medley relay after Texas’ top squad DQ’ed (Auburn would have won pretty handily even without the disqualification). Auburn is still using Marcelo Chierighini on this relay (he split an awesome 20.54 on the butterfly leg) despite the addition of Brazilian butterflier Artur Mendes for this meet.

Texas, on the other hand, is looking for creative solutions to their breaststroke problem. It would seem as though their Israeli wild-card, Imri Ganiel, isn’t going to be eligible to compete for the Longhorns this season, and with the recent departure of Nick D’Innocenzo, that leaves Texas without anything really resembling a true breaststroker. That most likely leaves them turning to fast-twitch sprinters for a stop-gap on the medley relays, and Thursday that was Charlie Moore (25.82) and IM’er/new-found speedster Austin Surhoff (25.43) on this 200 medley. Those are solid times, but they both gave up some ground to Auburn’s Stuart Ferguson (24.86).

As for the aforementioned Mendes, he began his NCAA career a bit inauspiciously with a 4th-place finish in the 200 fly with a 1:52.96. That was a race won by Texas freshman John Martens in 1:49.48, which is almost his personal best. In fact, he’s now gone the four best times of his career since coming to Austin, which gives Eddie Reese one more 200 fly weapon (he’s got a good class of them coming in next fall as well).

Mendes’ second swim was much better, as he was 2nd in the 100 fly to Texas’ Tripp Cooper by margin of 49.00-49.32. The Brazilian finished his meet with a 21.53 50 free relay split. Mendes will surely settle in to yards swimming, and the Tigers will really need him to do so to take their medleys to the next level.

The Texas men’s best performance, alongside their butterfliers, came from distance swimmer Michael McBroom. Alone atop the collegiate crew of Texas distance swimmers now (with Jackson Wilcox’s graduation), McBroom had a great mid-season meet in winning the 1000 free (9:03.68) and the 500 free (4:24.51). Texas new distance crew is actually shaping up very well, as they went 1-4 in holding off Auburn’s Zane Grothe, a mile All-American, in 5th in 9:22.29. Grothe had a better swim in the 500, taking 2nd in 4:27.67.

The Auburn sprinters, as is their tendency, were in fine form here. Marcelo Chierighini swept the 50 and the 100 free in 19.87 and 43.57, respectively, with that 100 time being most impressive. James Disney-May was also under 44-seconds in the 100 in 43.98. Texas’ Clay Youngquist (44.51) and Dax Hill (45.13) took the next two spots. Hill usually waits until championship season to do his best swimming (he seems to always hit his taper, in yards at least) but this time was a bit off even for him – he was a 44.4 in this same meet  last season.

On the women’s side, Auburn won a lot of races, but the Texas women kept the meet very close with a great demonstration of depth.

Hannah Riordan won the women’s 50 free for Auburn, just barely out-touching Texas junior Ellen Lobb 22.85-22.86. There’s not often much to say about a 50 free, but this race is notable because both teams will be counting heavily on these two to be the glue for their relays as both teams battle for top 10 (or higher?) finishes. Riordan would take the 100 free as well in 49.41, besting teammate Olivia Scott in 49.76.

Scott won the 100 fly in 53.35; she’s the overall national leader in the event this season, and that time specifically is the fastest official mark of 2013 as well. She beat out Texas’s sweet revelation Gretchen Jacques, who was a lifetime best of 53.77 for 2nd. Jaques’ speed improvements in all events have been unreal this season, and that gives Carol Capitani a lot more options come NCAA season.

In a bit of turned-tables in diving (though both teams have good diving histories), the Auburn Tigers really dominated the scoring on the boards. They won every diving event aside from the women’s 1-meter.

Hooked, what’s up with Kerrington Hill, Dax’ younger brother? He was such a tallent when he was young.

Yes, Texas has a hole in their breast-stroke camp. But it is not a TERMINAL condition.

Eddie will still have his team ready by March. Tripp Cooper just had sinus surgery over Christmas, so hopefully well, will contribute in the flys and the relays. Madison Gibson has swam lights out this year. Austin Surhoff will swim wherever he is needed. The distance guys, Michael McBroom and Jake Ritter will pull their weight as well. The 200 free will be solid with Dax and Clay Youngquist and there are 3 strong backstrokers on the team. Charlie Moore and John Murray have the potential to go 19low, fully tapered. They are Texas-tough and will come together as a team.

This is a meet right after the holiday break — so basically meaningless.

UT does not have Nick D’Innocenzo on breast but they do have the Israeli, Imri Ganiel. I’m not certain, but they may have lost argument for his elibility this year. But he will have full eligibility next year.

This may be a somewhat off year for Texas, but they’ll be nicely loaded next year.

So looking at the rankings and then the results, it seems Naoya Tomita showed up at the UNLV winter invite of all places, swimming under the name Tommy Tomita, for team Arena (I’m guessing Descente) and swam some predictably fast (but obviously untapered given his caliber) times. Does anyone (Braden) have any background on this? I wasn’t sure where to put this so I just picked a college swimming story.

Interesting Reid. Will check it out.

so what actually happened to dinnocenzo though

According to the collegeswimming website message board he was dismissed for some sort of combination of the following: Not attending classes, failing classes, and alcohol consumption.

I saw some of his results at a new england senior (age group) meet a couple of weeks ago. He was :55 in breast and had a few other times in that area. I wonder what he plans to do next…

What a shame; he had so much potential. Texas is a long ways from New England and hopefully he’ll recoup his losses back in his home environment.

Does anyone know why Nick D’Innocenzo left the program. He was senior this year, right?

Did Dax still have beard? he had one when I talked to him 3-4 weeks ago. he was not quite happy with his swimming at the Winter Nationals either. He will be fine in March.

Texas is as weak now as they have been in years. Lots of holes! lack of some good recruiting classes has caught up to them. they recruited well but they graduated some studs too this year.
They might have a tough time being top 3 or even top 5?!?!

While Cal, Stanford, Michigan, and maybe USC are more complete teams, Texas typically peaks at NCAAs better than any of them other than Cal. They are top 5 for sure, and I am not yet confident Michigan can get it all together to beat them out for top 3.

agree about michigan but right now UF and AZ might be as good as texas or better in addition to those you posted.

Do not judge Texas by mid-season meets. Last year AZ destroyed them at home. There is only one meet Eddie Reese care about – the one at the end of March.

Exactly- Zona was very strong all year last year, then fell way back to 4th at the end. Hansen never did much with the men’s team at Wisconsin (granted they had less than ideal facilities) and only about half the team, if that, peaked at NCAAs last year. Florida doesn’t have enough sprinters to challenge. Stanford doesn’t always maximize talent or hold taper for NCAAs, but they recruit in such volume that they are always a force just by virtue of having a roster full potential scorers. Cal and Texas are the two teams that don’t shoot their wad too early, get most of their guys qualified at conference, and then drop further to contend for a title.

Eddie is a great coach agreed….but not sure they always hit it at the end….how many times in the 2000’s was Texas favored to win and how many times did they win?
Also, you say UF doesn’t have sprinters….TX best sprinter vs Auburn was 20.7! I would say that Texas has less than UF this year.

@ Korn- you’re right, with Feigen gone, Texas lacks a superstar sprinter, but they still have Dax, Surhoff and Moore can perform, and a good freshman in Murray. Weaker than in years past but still definitely finals-worthy. Does Florida even have anyone sub-20 beyond DeBorde and Werner?

Dax and Surhoff can’t swim all relays….right now Surhoff is their go to breastroker….and Dax is the stud anchor?
i don’t know much about UF except their top end is better….

I just don’t think Eddie always hits it at the end….and he would be the first to admit that…..

Bottom line that is why they have the meet!