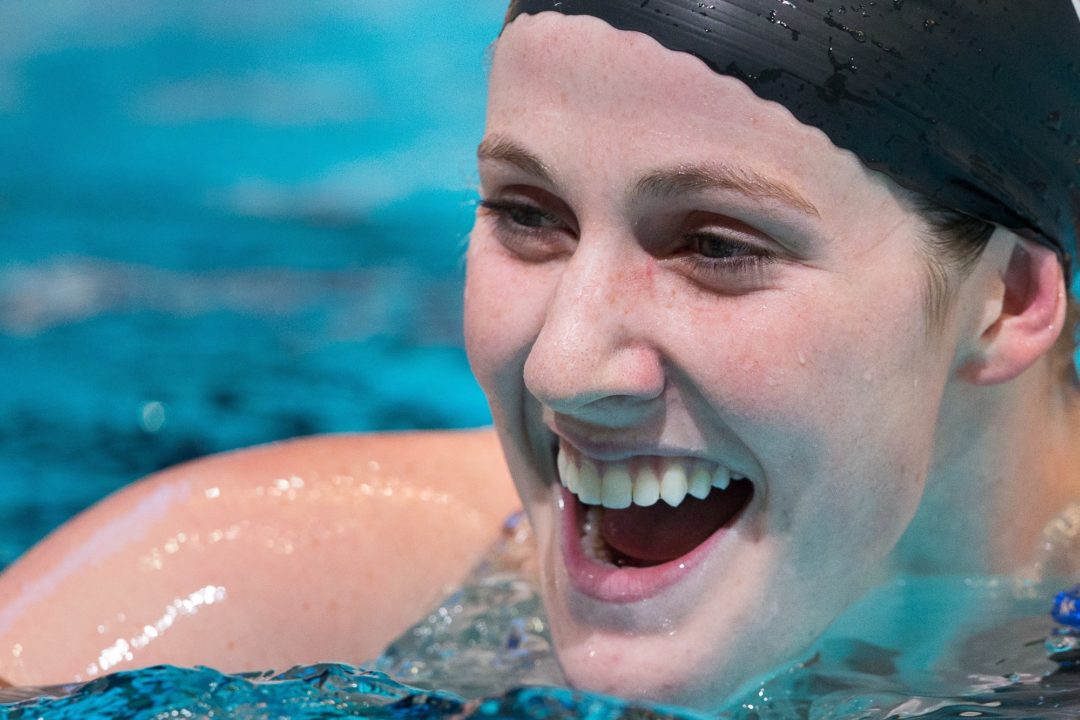 Tennessee Aquatics Coach Marshall Goldman: "After witnessing what I saw behind the scenes from all of the swimmers and coaches...I was left speechless and an even bigger fan of the sport to which I've been a lifelong fan." Current photo via Tim Binning/TheSwimPictures.com

The letter below is courtesy of Marshall Goldman, head swim coach of Tennessee Aquatics, the host team of the 2013 US Winter Nationals.

I wanted to share with you an experience that I had this week while our team hosted Short Course Nationals.  Being the head coach of the host team, this was my first experience on the “other” side of a high profile meet.

Growing up a “swimfan” all my life and being fortunate to have been able to watch high level swimming for twenty years, the awe struck attitude towards swimmers and big name coaches is long gone for me.  Last weekend however, I was awestruck for the first time since I was a 12 year old and an olympic gold medalist showed up at our summer league meet (I think Don Bosch made you do it).   Only this time it had nothing to do with fast swimming.

Olympic champion, Cullen Jones, at the 2013 US Winter Nationals

On the first night of finals at the meet, we had invited swimmers from our outreach program (Emerald Youth Foundation) to participate as basket carriers.  These swimmers are from the inner city in Knoxville and through many volunteers we have been successful in having them be a part of our swim team.  Prior to the finals session, I had reached out to Cullen Jones about meeting the kids when they got there.  Without any hesitation, he met the kids at the pool before his warmup, took pictures and gave them caps.  These swimmers eyes were as big as saucers and they proceeded to hang on Cullen all meet.  The best part, he let them.

I left them sitting in their basket carrier area, while i went to tend to other things on the pool deck.  When I came back I saw them, standing on the side of the pool next to the pace lane.  I began to approach them when one of the volunteers stopped me.  They hadn’t disobeyed.

David Marsh had gone and gotten them, brought them to the side of the pool deck and taught them how to do pace with swimmers.  He then asked swimmers to sprint so the kids could see it and went with the kids to watch videos of the swims.

The night progressed as normal and we had a fast session.  This is where I began to grow more impressed with the maturity and care of some of our young swimmers.  At the end of the night, one of my assistants texted me saying that Missy had Signed all of her medals and asked us to give them to the young basket carriers.  Missy, without any solicitation from a coach or parent, had asked one of the volunteers for a sharpie, signed the medals and gave them to my assistant.

As if this was enough, the next night Elizabeth Pelton and Missy Franklin would come back from their finals races, sign the medals and hang them on the necks of the basket carriers.  Pelton would even sit and engage the kids between race.  Watching this happen race after race, I was awestruck by the two young women.  It is their perrogative to do what they want with the medals,and to give them away without being asked or any solicitation was unbelievable.

It was heightened at the end of the meet.  I went to thank both of the young ladies after two nights of making sure the kids nights were special at THEIR midseason meet.  Both were very humble about it and Pelton showed some strong emotion about this being what the sport is about.

I realize this is the time of year when we are highlighting fast swimming, however, I wanted to write someone and express what I saw out of some high profile swimming community members during THEIR national championship.  We often times, reinforce the idea of times and forget the actions of our community but a big impact was made.

Its been 20 years since I’ve been awe struck by the swimming community and I’ve been very fortunate in who I’ve worked with and what I’ve seen.  After witnessing what I saw behind the scenes from all of the swimmers and coaches, but specifically those four, I was left speechless and an even bigger fan of the sport to which I’ve been a lifelong fan.

Thank you for sharing, Marshall! At SwimSwam we love reading these letters. If you’re a swim coach, swim-parent or swimmer, and you would like to share a meaningful experience you’ve had in this big community we call the swimming family, please send to SwimSwam.com and address to me, Mel Stewart.

Swimming has probably the lowest jerk percentage of any sport. And its easy to see why. Staring at a black line for five hours a day will teach you to be humble. Even when there is a capacity crowd cheering you on, you’re underwater can’t really hear it. And most of the time the stands have just a few close friends or family.

Brendan Hansen will always be a hero to my family. He gave a clinic to our local team, and his plane was late. So he stayed a couple hours after until every single swimmer had an autograph and a picture. Then when I was going to drive him back to his hotel, he asked if there was… Read more »

Soccer is another sport where the players give back. 😆
Here in France, that’s not the case for most of the players of the national team. The first words which come to my mind to define their attitude are rather arrogance and egoism.

That is a touching and positive story. Good to hear about elite athletes taking time to give back

There are a lot of stories like this in the swimming community and it is great to see. Ryan Lochte giving away his world championship medals is one that comes to mind.

Missy gave my 6 year old her gold medal from nationals in Austin. That was an unbelievable moment for our daughter. That gold medal was carried in her swim bag and touched before every race. I am just thrilled that my daughter has such powerful, positive role models. The moment made an impact on our daughter and last year she ended up breaking 6&under records in 5 events for our region. What an amazing ambassador and gift to the sport of swimming that Missy is!

Wonderful stories! Cullen, Missy, Liz and David are all class acts. I remember covering a meet in San Antonio in the 1990s where one of the biggest names in US Swimming was competing. One of the PR folks said, “There are a bunch of kids waiting at the main entrance. Let’s take her out the back.” The swimmer didn’t protest, so the kids (there couldnt have been that many) did not get her autograph. As you can see, I have never forgotten that.

It’s sensational to highlight those who’ve done ill things but this is a happy reminder there are so many more quality individuals in this sport than typically get press.

BTW…Missy and Liz are phenomenal human beings as well as talented athletes. Terri and Kristen at Cal are developing them into incredible swimmers and also amazing women. Props to all of them!