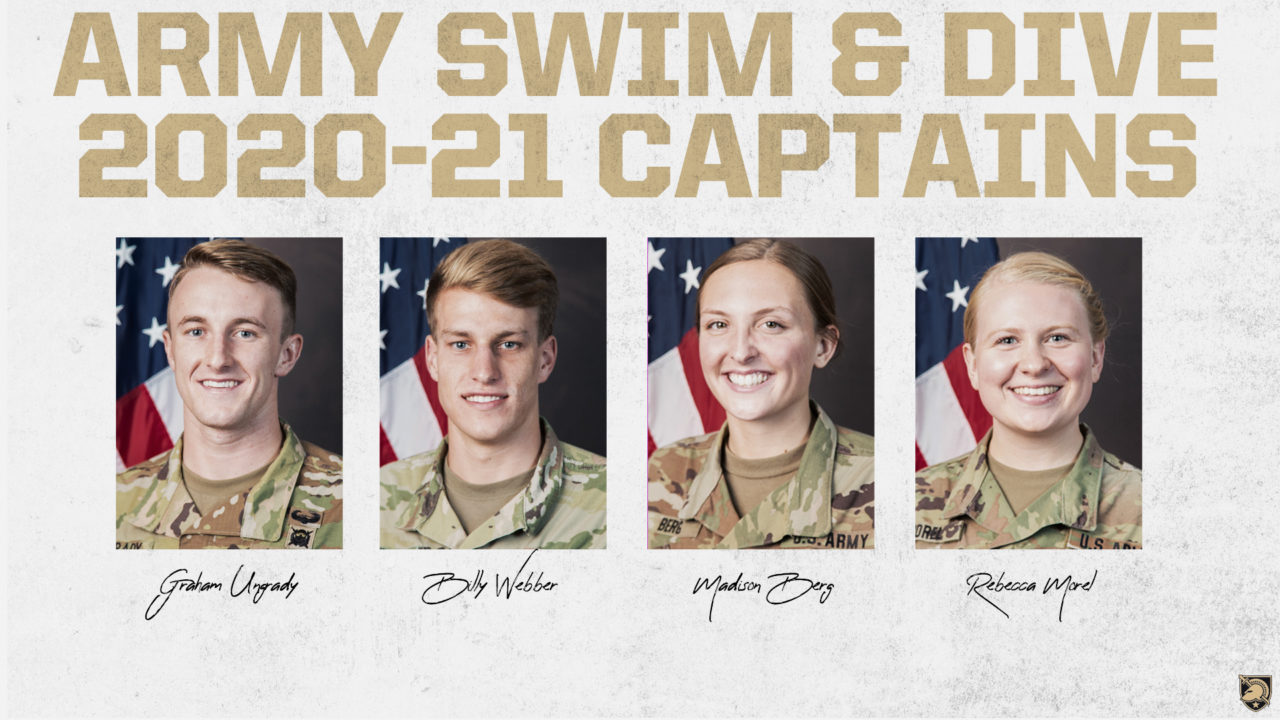 WEST POINT, N.Y. – The Army West Point men’s and women’s swimming and diving teams announced their captains for the 2020-21 season on Thursday.

“I’m very excited for our four captains to lead the team this upcoming season,” head coach Brandt Nigro said. “They were selected by their peers and the coaching staff to lead and I know they will do a great job. They each have given so much to this program over their first three seasons and I am confident they will help our staff bring this program to new heights this season and beyond. Through their words and actions, they represent everything that Army West Point stands for – Duty, Honor, Country. They bring it each day in workout, lead by example, speak-up when needed, but most importantly, they listen to their teammates and hold everyone accountable to our mission. As just a second-year head coach and staff, it means so much to know that they share in our vision and believe in the incredible potential that this program is capable of in the very near future.”

GRAHAM UNGRADY
Ungrady helped Army score big at the 2020 Patriot League Championships as a junior. The Second Team All-Patriot League swimmer tied for 21st in the league and finished sixth for Army in individual points scored with 35. Ungrady medaled in the 200 free after placing third with a PR of 1:36.89. He additionally finished sixth in the 100 free with a time of 44.90. The Jacksonville, Fla., native was key in helping the Black Knights grab silver in three relays at the league championships. He anchored the 800 free and 400 free relays, while swimming the second leg of the 200 free relay.

COACH’S COMMENTS ON UNGRADY
“Graham has a personality and demeanor about him that has allowed him to earn the trust on the men’s team, women’s team, and coaching staff. He has great passion for this program and West Point as a whole. In practice, he gives his best in each session and can often be heard motivating those around him, especially during the toughest of sets. He is coming off an incredible junior season, where he developed himself into one of the best swimmers on the team and in the patriot league. He stepped up when called upon for relays and is always looking for more ways to help his team. I am excited to work with Graham this season and put Army West Point back on the national map of NCAA Swimming & Diving, where it belongs!”

BILLY WEBBER
Webber, a First Team All-Patriot League performer, compiled 42 points at the 2020 league championships to finish 14th overall and third on the team in individual scoring. He highlighted the 100 free by topping the competition and earning the gold medal after touching the wall with a personal best time of 44.20. He additionally scored in the 50 free at 20.60 and the 200 free at 1:38.60 after placing eighth in both. The Boiling Springs, Pa., native played a major role in a trio of relay events for Army as well. He anchored the second-place 400 medley relay squad, while swimming the third legs for the 200 free and 400 relay teams that finished second.

COACH’S COMMENTS ON WEBBER
“When I first met Billy, I asked him why he chose West Point over the other service academies? He mentioned the first-class leadership developmental opportunities, our diverse and higher ranked educational programs, and West Point’s rich history of developing the best-of-the-best in those who commission and graduate from here. Over his first three seasons, Billy has worked hard and developed himself from a walk-on into one of the best swimmers in the Patriot League. He capped his junior season with 100 percent lifetime bests, both SCY and LCM, and by taking home the Patriot League title in the men’s 100 Free. Through grit and hard work, he turned himself into a champion, and his success only ignited his passion for the team and this sport even more. His work ethic and focus make those around him better. He is not afraid to challenge his teammates to be better, but he also knows when to give a pat on the back and lead with humility. I am excited for Billy to lead the men’s program along with Graham!”

MADISON BERG
Berg capped a stellar junior campaign by winning the 50 free at the 2020 league championships after she took down the reigning champ from Lehigh with a personal-best time of 22.91. She also took fourth in the 100 free with a PR of 50.33. The First Team All-Patriot League swimmer finished 24th overall and third on Army in individual points scored at the four-day meet with 35. Berg played an instrumental role in three Academy record breaking relay events. She anchored the second-place 400 medley relay squad as well as the third-place 200 free relay team before swimming the opening leg of the 400 free relay to help the Black Knights place fourth and set an Academy record.

COACH’S COMMENTS ON BERG
“Madison represents everything Army West Point expects from its cadet-athletes. She is talented, but more importantly she wants to win and will work tirelessly. She gives it her all in the pool, during dryland and in the weight room. She also excels when it comes to recovery, nutrition, and honing her mental skills in order to be at her best and help her team achieve its goals. Her teammates look to her for leadership and she provides them with so much more. Her will to win and her passion for this program and Army West Point is inspiring.”

REBECCA MOREL
Morel, a Second Team All-Patriot League swimmer, finished tied for 33rd overall and fourth on Army in individual points scored at the 2020 league championships with 31. She scored in several events for the Black Knights, including a pair of fifth-place finishes in the 100 breast (1:03.56) and 200 breast (2:18.32). The Mendham, N.J., native also scored in the 200 IM after touching the wall at 2:06.02, a personal-best time.

COACH’S COMMENTS ON MOREL
“Rebecca has an incredible ability to connect to those around her. She is a tenacious trainer and competitor and has been a big part of our women’s team since her plebe year. Her improvement curve since coming to West Point has been amazing, but this has not stopped her from reaching for more and pushing her limits. She leads by example both in the pool and in the classroom and her impact as a captain on the team is already taking shape. I am excited for Rebecca and Madison to lead this great group of young women and all of Army women’s swim and dive to new heights.”