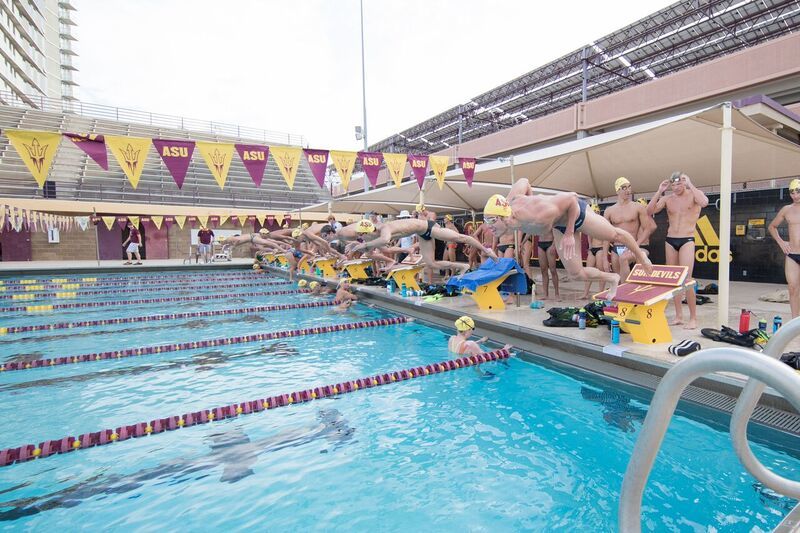 Siobhan Haughey broke the Asian Records in the women’s 100 free on Day 5 Prelims of the Tokyo Olympics. This come hours after she won silver in the 200 free.

Any Texas men’s fans hoping that the Longhorns would show some speed to match the swift times we saw from Division I swimmers last week were disappointed, as the Sun Devils bowled over the Longhorns Friday afternoon in Tempe.  Sure, duel meets may not mean a lot, but a 162-138 victory over Texas, even a Texas team that hasn’t sparkled in dual meets this season, is a big indication of just how far Arizona State has come in less than three years under renowned coach Bob Bowman.

The Sun Devils warmed up their home pool by beating the Longhorns by the better part of a second in the 200 medley relay, 1:27.61 to 1:28.30.  ASU’s strength came on the front half and Joseph Schooling and Brett Ringgold couldn’t overcome the lead that Zachary Poti and Christian Lorenz had built. (Note: ASU’s back/breast splits appear to be off in the official results, perhaps reversed).

That opening relay began a streak of five consecutive wins for ASU, with the Texas swimmers not even really battling for the wins in any of them.  Benjamin Olszewski got things rolling individually in the 1000 free, cruising to a 9:10.81 that put him almost seven seconds ahead of runner up Chris Yeager of Texas.

The two teams ended the afternoon with a 200 free relay instead of the more traditional 400 free relay, and Arizona State put a cherry on top of its sundae by pulling out the win here as well, 1:18.87 to the Longhorns’ 1:19.64.

One notable absence from the Longhorns was junior John Shebat, the fastest-returning swimmer in the 100 and 200 backstrokes from last year’s NCAA championships.

It was a quite a different story on the women’s side, as the Longhorns won all except two swimming events.  Texas bookended the meet with victories in the 200 medley relay (1:40.30) and the 200 free relay (1:31.43), although the latter was exhibitioned.

TEMPE, Ariz. – The No. 10 Sun Devil men started the meet on a high note and despite the No. 2 Longhorns coming within striking distance near the end, earned the upset victory vs. 13-time and reigning national champion Texas, 162-138. The No. 4 Longhorn women won, 177-122.

“Quite frankly, facing Texas, I was worried about how they’d step up but they stepped up and did a fantastic job of racing and that’s what we had talked about,” said head swimming coach Bob Bowman. “We were very fortunate to get by them because they’re an amazing team, but I’m very proud of our guys because they stepped up.”

The men’s race came down to the final event – the 200 free relay – as the Sun Devils were ahead by just 15 points going into the event. The “A” squad – Craig, Porter, Evan Carlson, and Patrick Park – stepped up once again to grab a crucial 11 points to secure victory while the “B” squad also picked up two points. Craig’s startoff leg and Park’s anchor leg were good for top-five ASU times in the 50 free this season.

“I think we gained some confidence last week at Cal and Stanford,” said Bowman. “I thought we raced really well against those teams and I felt like if we just stayed positive and just keep moving forward, we’d be in a good place.”

The breaststroke continued a strong event for the Sun Devil women, with ASU winning both events (Silja Kansakoski in the 100, Marlies Ross in the 200). Frida Kaellgren also posted a victory in women’s diving in the 1-meter springboard, the team’s highest score in the event of the season, finishing second in the 3-meter.

Next weekend, Arizona State closes the regular season playing host to their cross-state rival, No. 18/20 Arizona, on Saturday, Feb. 3 at 1 pm MT. The Territorial Cup point will be not be decided in the meet as that point is decided at Pac-12 Swimming & Diving Championships in February and March.

Schooling collected the Longhorns’ first win of the day with his mark of 1 minute, 44.48 seconds in the 200-yard butterfly. His classmate Ringgold led a one-two Texas finish atop the 50 freestyle at 20.11. Junior Tate Jackson followed closely behind at 20.36.

Schooling notched his second victory of the afternoon with his 47.37 in the 100 butterfly. The Singaporean is a two-time NCAA champion and reigning Olympic champion in the event.

Freshman Jordan Windle led a dominant performance from the Texas divers with his sweep of the one-meter and three-meter events. The two-time World Championships qualifier won the three-meter event with 424.80 points while sophomore teammate Grayson Campbell took second at 378.90. Windle edged Arizona State’s Youssef Selim for the victory on one-meter with 373.65 points.

Redshirt sophomore Ryan Harty trailed through the opening 50 yards of the 200 IM but took over on backstroke and breaststroke on his way to victory at 1:47.66.

Texas opened the meet with a win in the 200-yard medley relay, where sophomore Claire Adams, juniors Olivia Anderson and Remedy Rule and senior Rebecca Millard were victorious in 1 minute, 40.30 seconds.

Sophomore Lauren Case topped the final standings in the 200 butterfly at 1:59.42, and Adams posted her second individual win in as many swims with her 49.58 in the 100 freestyle. Junior Quinn Carrozzawon the 200 backstroke with room to spare at 1:56.26, and freshman Evie Pfeifer put one in the win column with her 4:51.21 in the 500 freestyle.

Rule tacked on another with for the Longhorns in the 100 butterfly, where Texas claimed the top three spots. Rule was victorious at 54.32 while freshman Emily Reese and Case tied for second at 54.66.

Pfeifer picked up her second win of the meet with her 1:59.93 in the 200 IM. Texas elected to exhibition the final event given that the team win was well in hand. Nonetheless, the Longhorns were victorious at 1:31.43.

Texas heads to Tucson to meet Arizona on Saturday at noon CT.

Is Shebat on this trip? Injured? Swimming tomorrow vs. Arizona?

THIS MEANS THAT ASU WILL BEAT TEXAS AT NCAAS!!!!!

Only the loser says that.

Hard to argue with Eddie’s success, of which one of the cornerstones is work hard right up to taper for NCAA’s. Doesn’t do much for the dual meet record, especially when other teams/coaches love to grab the spotlight with a win against Texas by easing up on practice for a few days before the dual meet. This is really easy to see, just take a look at the 200 Free. ASU swimmers going mid 1:30’s, while the defending NCAA champion in the event can barely break 1:39. No guarantee Texas wins NCAA’s, but they are certainly not let a dual meet win stand in the way of their preparation.

It’s not wrong though

NOW WE KNOW WHO THE BETTER COACH IS!

Carol C. Is the best coach!

The Sun Devils just finished winter training the day before the Harvard meet; less than 24 hours when they duel against the visiting team. No excuses but that was the reason.

No excuses but let me make a quick excuse

LUKE MEBALLS, do you see all the excuses in this thread of why Texas lost to ASU??? Texas fans are so quick to defend with their lame excuses when their team loses. So classic and predictable…ha!

No excuses for a 3-peat, or most titles all-time.
Cal may win this year, but the Horns won’t give it up easily.

Classic and predictable like everyone claiming Texas is gonna do so badly at NCAA’s whenever they get beaten by another team?

I just did a quick scroll through – I’m not sure anybody claimed that Texas will do “so badly” at NCAAs, except for a few tongue-in-cheek “OMGZORS” comments. A few have questioned if the meet won’t be the runaway that it’s been the last few years, but I don’t think anybody predicted that they’ll do badly.

And Harvard was shaved and tapered??? Or Harvard doesn’t do winter training? Obviously ASU was a bit more “prepared” for Texas and Texas has struggled all season in duel meets.

Ummmm, I’m not so sure I’d use the word “struggled.” If their goal was to win a dual meet then yes, “struggle” might apply. However, Texas is simply giving all that they’ve got in each duel given their body’s current state. Townley Haass didn’t forget how to swim the 200 freestyle. He’s a beast and will be lights out when it matters. Their bodies won’t be prepared to swim fast any sooner than necessary.

Dean Farris is a GodKing.

No mention of the women’s results by coach! And this is still same team that got beat by Harvard a couple weeks ago! Obviously a bit of rest for asu and Texas needs to start resting pretty soon but Eddie is usually all over resting!
Maybe Cal can win?!?!

It was a huge win for the ASU Men’s, upsetting the reigning NCAA champs! So, obviously the coach and the entire team are excited and celebrating! The Women’s on the other hand, won only 2 events and some strong second place finishes. Hopefully, the ASU Women’s will come back strong and healthy in 3 weeks just in time for PAC-12 Championships! Let’s Go Devils…☀️?

0
0
Reply
Robert Gibbs
Author
Reply to  KNOW IT ALL

Pretty sure that Poti didn’t split a 24.57 on the backstroke leg of the medley, considering he went out in 23.44 on the 100 back. So, don’t think Lorenz went 22-mid in breast. Looks like the splits are off.

Nah Townley is faaaaaast. Watch him do a 1:30.16 at NCAA’s Texas is gonna get second

I think townley has been around those times at all his duel meets this year, nothing too concerning right now. We’ll see how everyone does at big 10’s to get a better gauge of NCAA performances