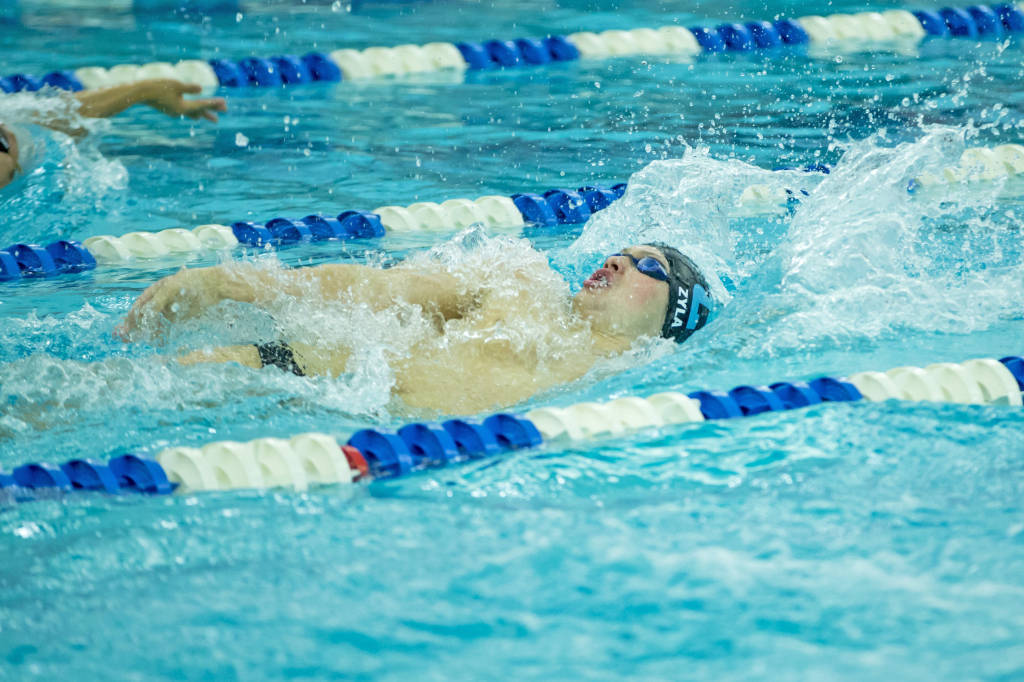 Columbia won the 400 free relay, the last event, by .06 seconds to beat Navy by 2 points in the overall score. Archive photo via Columbia Athletics

Columbia edged Navy in the 2nd-to-last dual meet of the season for both teams on Friday, January 26th. The meet came down to the last event, the 400 free relay.

Kevin Frifeldt took the 100 fly by a second over Navy’s James Wilson, beating him 48.59 to 49.54. That is a season best time for Frifeldt, marking his first race under 49 seconds this season. Frifeldt went 47.44 at last year’s Ivy League Championships, which is his lifetime best time.

Jonathan Suckow‘s unbeaten streak in the 1 meter in collegiate competitions was snapped by Bradley Buchter (Navy). Buchter led the pack with his score of 372.68, a significant margin ahead of Suckow, who went 347.48. Suckow came back in the 3 meter to win with a 388.43.

Annapolis, Md. – The Columbia men’s swimming & diving capped its non-conference slate with a bang on Friday, Jan. 26 as the 400 freestyle relay squad of Kevin Frifeldt, Mark Gullick, Michal Zyla and Albert Gwocombined for a winning time of 3:00.57 in the final event of the afternoon to defeat Navy 151-149. In a meet that saw both teams trading victories through each event, the Lions emerged with their fourth-straight win to move to 7-2 overall this season.

1:30.45 marked the winning time for the Columbia 200 medley relay squad of Cole Stevens, Jae Park, Kevin Frifeldt and Albert Gwo. Michal Zyla hit the wall first in the 200 freestyle with a time of 1:39.21, Jae Park took home the crown in the 100 breaststroke at 55.97 for his first of two wins on the afternoon.

On the boards as Jonathan Suckow led a strong Columbia showing in the three-meter dive (388.43) with a first-place finished, followed by a runner-up score of 379.05 by Jayden Pantel. Suckow also collected runner-up points in the one-meter dive with a tally of 347.48.

ANNAPOLIS, Md. –– Columbia won the meet-closing 400 freestyle relay by six-hundredths of a second to edge the Navy men’s swimming and diving team, 151-149, Friday afternoon at Lejeune Hall in Annapolis. The contest was the last dual meet of the season for the Mids (9-3), while the Lions (7-2) will end their regular season next week against Dartmouth.

The outcome in two of Navy’s three losses this season has not been determined until the final event of the meet. The Mids dropped 151.5-148.5 decision to Princeton when the Tigers placed second and third in the 400 free relay. Navy needed to win the event and also finish in one of the other two scoring places to win the overall meet.

“We’re a couple of tenths of a second away from being 11-1 instead of 9-3,” said Navy men’s swimming head coach Bill Roberts. “We can’t undo what has happened. Hopefully w

“We knew it would be a close meet,” said Roberts. “If one team got ahead, we knew it wasn’t going to last. I told the guys, ‘just do what it takes to race well, dive well, score points.’ We were down at the first break and up at the second and our message during both was exactly the same.”

Navy totaled seven event wins on the day, with Ryan Waters(Fr., Basking Ridge, N.J.) earning victories in both the 1000 free and 500 free. He posted a time of 9:21.60 to win the longer race by 1.49 seconds, then recorded a clocking of 4:30.24 to take the shorter event by just over eight-tenths of a second.

“Ryan was excellent in the 1000 free,” said Roberts. “Some of our spark came from the guys who finished third, fourth and fifth in some of the races. Those were critical points. Little things add up.”

“It was a tough meet today against one of the better teams in the East,” said Navy diving head coach Rich MacDonald. “We did some good things and we did some things we need to work on over the next couple of weeks heading into championships. It’s always good to have these challenges at the end of the season to show us what we really need to focus on.”

Both Navy teams will play host to the Navy Invite –– a non-scoring meet –– Saturday at noon, then each will turn their respective sights solely on the Feb. 14-17 Patriot League Championship in Lejeune Hall.

e will learn from these two meets and get a lot of positives out of them. It stings, there is not doubt about it, but hopefully we can channel it forward for February and March and our championship meets.”

The lead jockeyed back and forth in the relay race, with Columbia in front by one quarter of a second at the halfway point in the race. Navy took a slight lead after a great third leg by Zach Piedt (Jr., Fort Mill, S.C.), which left Navy’s Connor Davis(Sr., Shelton, Conn.) and Columbia’s Albert Gwo battling it out for the victory. The Navy advantage winnowed through 300 yards, then the two were neck-and-neck with each other as they approached the final wall. In the end, Gwo edged Piedt to give Columbia a 3:00.57-3:00.63 victory.