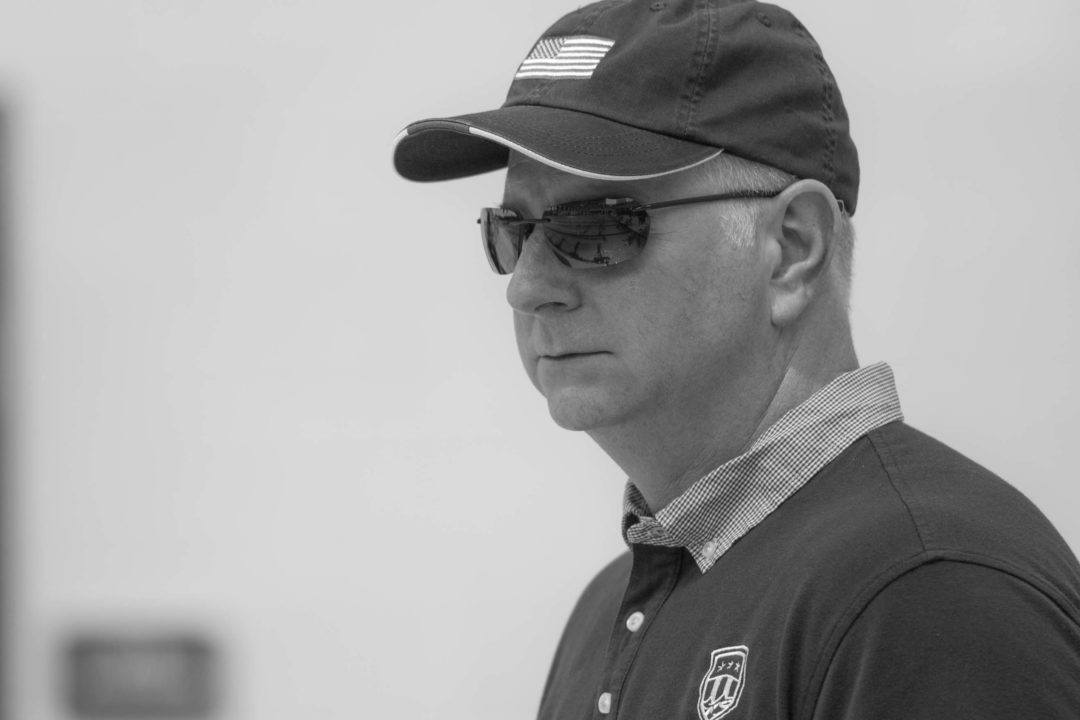 The Arizona Republic and USA Today, which owns the Republic, have obtained and published the full text message chain between coach Bob Bowman and Olympian Caroline Burckle, messages that have drawn harsh criticism of Bowman and prompted an apology from the 2016 Olympic coach. Archive photo via Mike Lewis/Ola Vista Photography

The Arizona Republic and USA Today, which owns the Republic, have obtained and published the full text message chain between coach Bob Bowman and Olympian Caroline Burckle, messages that have drawn harsh criticism of Bowman and prompted an apology from the 2016 Olympic coach.

USA Today and the Republic obtained the text messages as part of an open records request to Arizona State University. Per its reporting, here is the full text message thread, with Bowman and Hutchison appearing to both text from Bowman’s phone:

Bowman’s phone: “Sean wants you. I want your brother!!”

Burckle: “This is gross, who is this?”

Bowman’s phone: “Bob bowman. Who is this hon?”

Bowman’s phone: “This is Sean now how you?”

Burckle: “Is this still Sean?”

Burckle: “I’m a little confused as to what is going on, but if this truly is Bob and Sean, this is really inappropriate.”

Burckle: “Allright, it’s getting late, if this is bob and Sean, then please don’t text me anymore. But if it’s someone else playing a joke, Please tell Me who it is because I don’t think this is funny.”

Hutchison is now accused of grooming and sexually abusing another Olympian, Ariana Kukors Smith, who alluded to more allegations coming against an Olympic coach in her lawsuit against Hutchison.

Bowman told USA Today that the messages were inappropriate and that he called Burckle to apologize for them. He also says the line about her brother – 2012 Olympian Clark Burckle – was swimming-related.

“The exchange was inappropriate, which is why I apologized for all of it,” Bowman says in USA Today. “The reference to her brother, however, was swimming related. Her brother was swimming really well at the time and I had interest in coaching him.

“Clearly, this was not the manner or forum through which I should have communicated, nor should I have allowed any other individuals to communicate through my device, which is what I expressed to her when I apologized to her in a follow up phone conversation. I am deeply sorry for what occurred, have learned from all of this, and am grateful for the good relationship we have today.”

The messages were sent in 2011. Bowman would be on staff for the 2012 Olympics, where Clark Burckle competed, and was named head men’s coach for the 2016 Olympics. USA Swimming CEO Tim Hinchey said last week that if the incident happened today under his watch, he “can’t see appointing [the coach] to an Olympic team.”

Arizona State says it didn’t know about the text messages when it hired Bowman in 2015. The university issued a reprimand to Bowman on July 22, but hasn’t taken any further action.

exactly what i thought ……jeeeeez

This is what I thought of:

Creeps. I’m sorry, but I’d rather have Lochte peeing drunk at a Rio gas station than these guys anywhere near younger people.

Was this before emojis were invented?

Looked this up – anyone have a hard time understanding this
Bowman held assistant coaching positions with the Napa Valley Swim Team (1991–92), the Cincinnati Pepsi Marlins (1990–91), and the Las Vegas Gold swim team (1988–90).
Did anyone really ever look at this guy?

“I want your brother.” After saying sean wants you. How does that even sound swimming related LOL…

Welll it’s either swimming related or Bob is gay.

I mean he’s not married so

Vote Up85-5Vote Down Reply
Swimmer A

Bob is gay, it’s been known for a while.

Vote Up81-1Vote Down Reply
bob (not this bob

Obviously, the text messages are inappropriate and he should be punished… but moving onto the purpose of the post. Assuming Bob is gay, could he not be ‘out’ because it is not normal for a swim coach to be gay? It’s interesting to think that the posts are focused on him being gay and not about his text about wanting to be with a swimmer (who happens to be male – also assuming he is in fact not talking about his desire to coach him which is in itself debatable as he is a known recruiter and ruiner of talent to find someone for Michael to train with). Do people care if he’s a gay coach? Do people not want… Read more »

Let’s be realistic. He definitely wasn’t talking about a desire to coach him. lmao. The context of the text is the clear issue. It’s not an issue with him being gay.

And…is there something wrong with either????? As I recall she is a 24 year old non-swimmer! So why did this even go to USA seimming and who cares sbout Bob or Sean takking to an unaffiliated adult????????????????

it sounds like a really stupid joke to me

I have no idea if Bob is gay or not (I doubt you know either) but anyone who reads this as a serious pick-up attempt has the mental age (and pick-up technique!) of a 12-year-old. It reads like a stupid juvenile joke – the equivalent of a prank call. Yes, a creepy, but that’s it (unless there’s context we don’t know about, like the Burckles were staying in the same hotel, etc.) But I really don’t understand the freakout. These are all adults (right? Or how old was Clark Burckle?) No one was in a position of power over anyone… I don’t blame her for being offended, or complaining about it, but you shouldn’t conflate Bob’s text with what Hutchison… Read more »

Vote Up39-43Vote Down Reply
Swimmer A

Bob is gay, he’s not talking about swimming here despite the lame ass cover he provided for himself. And it’s true we shouldn’t conflate this event with Hutchinson’s relationship with Kukors. But at the very least it shows Bob doesn’t mind getting drunk and sending dirty texts to swimmers alongside a coach who’s under investigation for soliciting child pornography. So that’s not a good look.

Vote Up72-12Vote Down Reply
Swimmer A

I assume based on context that you are replying to me. So to address your first comment – yes, Sean Hutchinson is being accused of soliciting child pornography:

“The Seattle PI story goes on to say Kukors accuses Hutchison of taking “hundreds or thousands of sexually explicit photographs of her” at the age of 17.” – 4th paragraph down

And I am not relating being gay to “anything to do with children,” whatever that means. That comment had to do with Bowman’s assertion that “The reference to her brother, however, was swimming related.” That is a huge load of BS.

If Bob is gay, and despite the number of popular votes that theory is getting on this article, as a gay man myself my “gaydar” doesn’t tell me he is, he would not make a joke outing himself like the one in this stream of texts. Straight people make gay jokes all the time; believe me, I know!

correct answer! either it really is a non-sexual comment, or perhaps he is gay and everyone involved knew it and therefore he felt comfortable making a (bad) joke.

Gaydar doesn’t always work. I think I was born with a defective one. Yeah straight people definitely make gay jokes. But this guy is gay lol. That’s something that’s been known for awhile.

Lauren, you’re a member of the swimming elite, as a writer here and a high-level competitor, so if you say everybody knows Bob is gay, then I must defer to your knowledge of the situation.

I read the exchange as the first line being Sean using Bob as a cover until Sean gets a response and then Bob replying to her reply to say who is this? Of course he plays along once he’s in on it. In Ariana Kukors’ story she talks about how at the beginning Sean would say something that that could be innocuous or not and then wait for her reply with an amused expression.

If Bob is homosexual (not saying he is) then how he chooses to have sex is his own business, not to be discussed on a website by strangers unless he is ok with that.

Let’s change some of the context and see if your perspective changes:

High school teachers text newly graduated Senior “Sean wants you and i want your brother.” Brother is a Rising senior and Bob is promoted to principle that fall. Is tThis still appropriate? Does Bob still not “have power” over anyone? He absolutely does. I never filed a complaint because he has power over the swimming world and is power hungry enough to use it.

Maybe, its a double meaning, but I’m sure her brother was a good swimmer. Off the wall.

I get that these texts are pretty damning and shocking, but speculating on a person’s sexuality, no matter the context, is harmful and may make it difficult for others to come out. We don’t need thinly veiled homophobia on SwimSwam or any other site for that matter. Fact of the matter is, no matter what Bowman’s sexuality is, is that the content of the texts is highly inappropriate. Let’s focus on that rather than focus on what gender(s) he’s attracted to.

And that should be the end of it.

If Bowman’s excuse that he meant he wanted to coach Clark Burckle were true, it would be a very poorly executed illegal recruiting attempt (poaching from another team). If this were a serious attempt at recruiting, there are also rules about how and when a coach can text. Bowman thinking it is less bad for this unprofessional exchange to be tied to one of his professional duties (recruiting) actually makes him more of a professional liability to his employer.

Come on, which year was the text message sent and when did he start coaching college athletes at Arizona? 2011 and 2015. He left Michigan in 2008 and was basically a club coach between 2008 and 2015. So no breaking of NCAA recruiting rules in 2011.

I would be concerned about that too. That’s the first question I had when I read the first line.

It is basically the only “bad thing” that can be strictly attributed to Bowman, all the other stuff can be blamed on Hutchison. “Sean wants you” from the first text is presumably sent on Hutchinson’s behalf, and following texts seem to be sent by Hutchison.