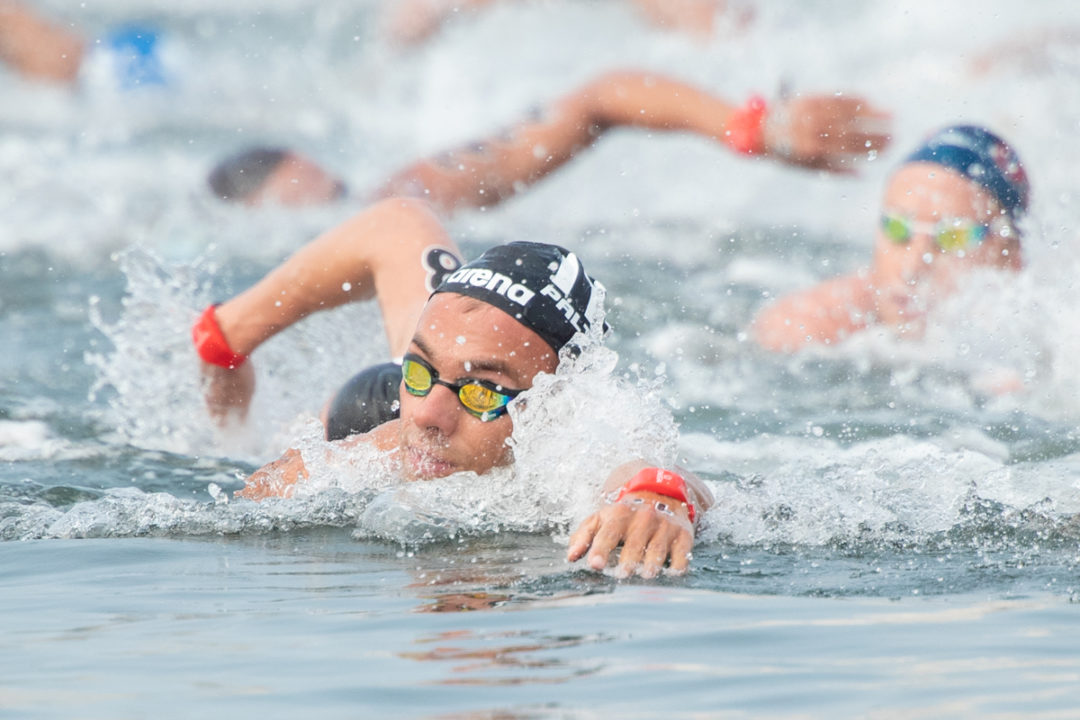 The 55th edition of the Capri-Napoli Gulf Marathon saw a woman emerge as the overall winner of the race and a relay race contested, both for the first time. Current photo via “Rafael/Domeyko Photography”

Italy’s 55th edition of the Capri-Napoli Gulf Marathon just wrapped up on Sunday, September 6th. A total of 15 athletes participated in the race, including 9 men and 6 women. The race began at the Marina Grande in Capri and finished at the Circolo Canottieri club in Naples, for a total of 36 km (~22 miles). The race represented the final leg of the 2020 FINA Ultramarathon Swim Series.

In a historic swim, Italian Arianna Bridi, the 2018 European open water champion in the 25k, won in a final time of 6:04:26. Her time was a new record. It was also the fastest of all competitors, both male and female, making her the first woman in history to be the overall winner of the mix-gender event. Further, it was the fastest finish in the history of the race.

The end of the race proved to be very exciting, as Bridi out-touched second-place finisher Ana Marcela Cunha of Brazil by a second (6:04:27). Argentina’s Caroline Jouisse finished third for the women (6:33:45).

Dutch swimmer Marcel Schouten claimed first on the men’s side and third overall, finishing in 6:05:07. The battle for second was tight, with Matteo Furlan of Italy out-touching bronze medalist and fellow Italian Alessio Occhipinti by 0.02. The next two finishers on the men’s side were not too far behind, as Francesco Ghettini of Italy finished fourth in 6:05:08 and Brazilian Olympian Allan do Carmo was fifth in 6:06:55.

In addition to the individual race, a relay was contested for the first time at this competition. The Italian team was the only relay team to compete, captained by Olympic champion Gregorio Paltrinieri. He was joined by Italian national team members Domenico Acerenza, Martina Grimaldi, Simone Ercoli, Giulia Gabbrielleschi, and Martina De Memme.

In addition, 3 members of the Italian Paralympic team competed in the relay, including Vittorio Abete, Roberto Pasquini, and Giuseppe Spatola.

Paltrinieri commented the following to SwimSwam Italia (translated from the Italian):

“I went 5th, in the middle of the ocean. It was very strange and a bit impressive. I have already raced in the ocean, but never this far from the coast. Before jumping out of the boat, I didn’t see Capri or Naples. The water was so deep that you couldn’t see anything but blue. There were tuna swimming around us.”

In regards to the relay, specifically, he added:

“It was engaging. I enjoyed the experience, we were able to talk in the boat and to converse with the athletes. This doesn’t happen often and we enjoyed ourselves.”

Congratulations to Ms. Bridi on her incredible swim!

That is amazing. What an accomplishment!

Yes, Bridi’s winning time was also the fastest in the history of the race.
Really an amazing achievement from these two women (Cunha finished just a second behind Bridi) who were so clever to choose the best trajectory in the first part of the race, but were also the strongest swimmers in the sea.