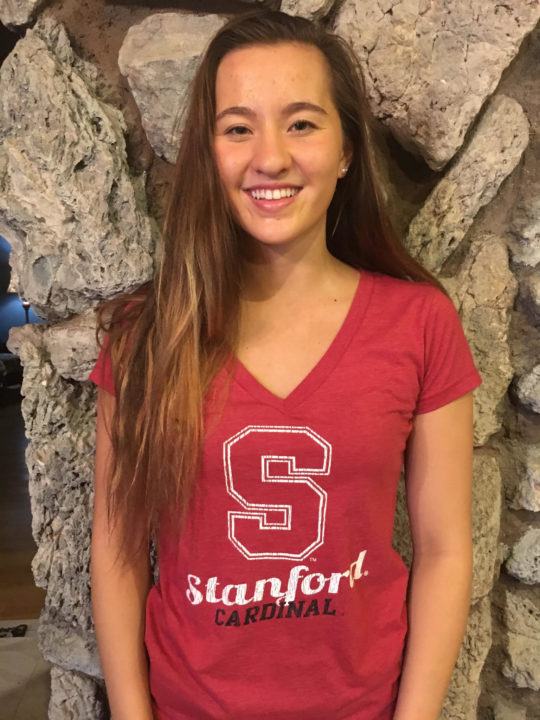 Katie Glavinovich of Aquazot Swim Club and JSerra Catholic High School in Southern California has made a verbal commitment to Stanford University's class of 2021. Current photo via John Glavinovich

Martin del Campo is set to make a big impact upon her arrival at Oberlin as one of their top freestylers in both the sprints and mid-distance events.

It’s not over! After receiving verbal commitments to the class of 2021 from Ashley Volpenhein, Brooke Forde, Grace Zhao, Hannah Kukurugya, Lauren Green, and Lauren Pitzer, Stanford women’s swimming and diving has pulled in another: Katie Glavinovich of Aquazot Swim Club and JSerra Catholic High School in Southern California.

“This is a dream come true,” Glavinovich said. “I can’t wait to attend and represent Stanford next year.”

Glavinovich has been invited to the USA Swimming National Select Camp in January. Her best SCY/LCM times are:

Awesome! Welcome to the Farm!!! Great recruiting for Greg and Tracy.

Start recruiting of Kate Douglas. She will replace Simone after she graduates.

Congratulations! Your dream has been realized through hard work and perseverance. Never doubted you. So very excited for you Katie!

If Greg and Tracy can sign Penny, it would be awesome. I love to see her get her education at Stanford and swim there. At least she already knew Simone from the Rio!

I don’t know much about Gabrielle. She is a 50 back world champ from what I found the info on the web.

Stanford is still looking for a world class Breastroker I think.

Penny has an incredible coach already in Ben Titley. I’d be surprised if she moved.

wait and see for the breaststroker thing.