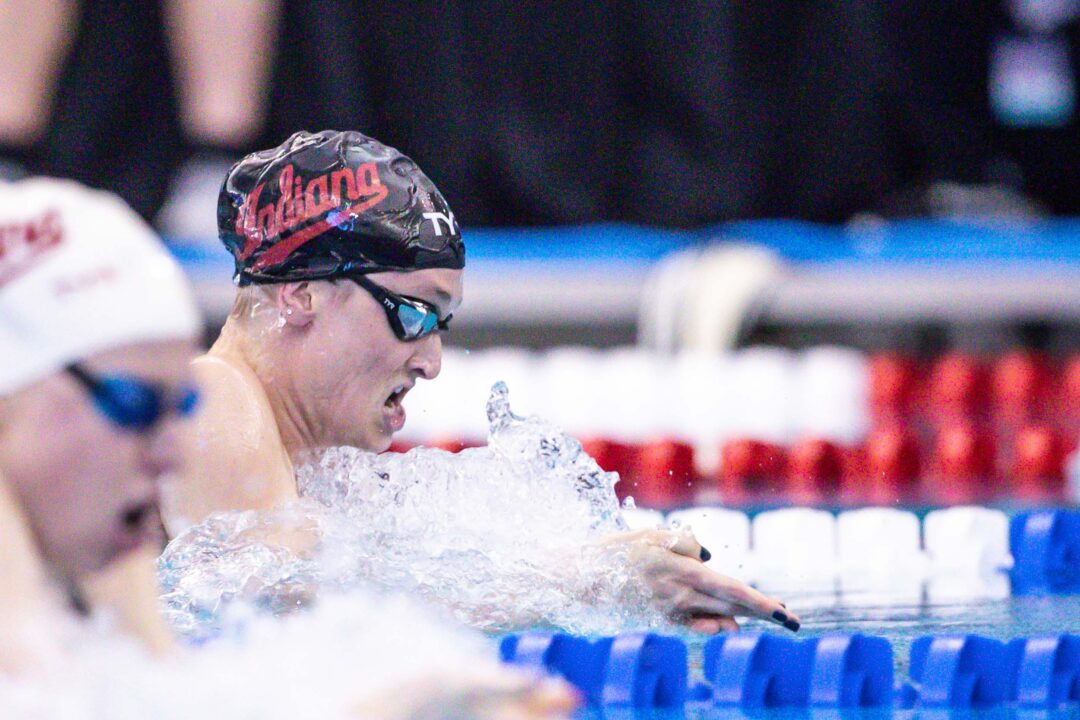 Exactly one month out from the heats of the World Championship 100 breaststroke, Annie Lazor threw down her third-fastest time ever in the event. Archive photo via Jack Spitser/Spitser Photography

Some of the top midwest swimmers are at the IU Natatorium this weekend, including 2020 Tokyo Olympian Annie Lazor.

Lazor, swam a 1:05.91 100 breaststroke to earn the win. That is faster than she was at International Team Trials as she swam a 1:06.12 there to finish second and secure a spot on the US World Championship roster next month. The 100 breaststroke heats is exactly one month from today. That also was Lazor’s third fastest time in the event ever.

On Wednesday night, Ohio State sophomore Maya Geringer won the 800 freestyle in a 8:44.14 which was just off of her best time of 8:43.91 which she set a few weeks ago at International Team Trials. 14 year old Lynsey Bowen of Carmel Swim Club (CSC) was second in a time of 8:55.13. That time was slightly off her best time of 8:51.62 which she swam at the end of March. Michigan freshman Kathryn Shanley rounded out the top three touching in a best time of 8:56.72.

Itay Goldfaden won the men’s 100 breaststroke in a 1:02.69. Goldfaden was recently announced as a member of Israel’s World Championship roster. That was slightly off of his best time of 1:01.07. Coming in second was Indiana freshman Luke Barr who touched in a 1:03.65. Barr swam a 1:02.65 at International Team Trials. Youssef El Kamash, who represented Egypt at the 2021 SCM World Championships, was third in a 1:03.94.

Unfortunately, the time posted in the women’s 100 meter breaststroke will not be fast enough to medal at the 2022 FINA World Aquatics Championships.

In other news… Patrick callan is headed to Cal