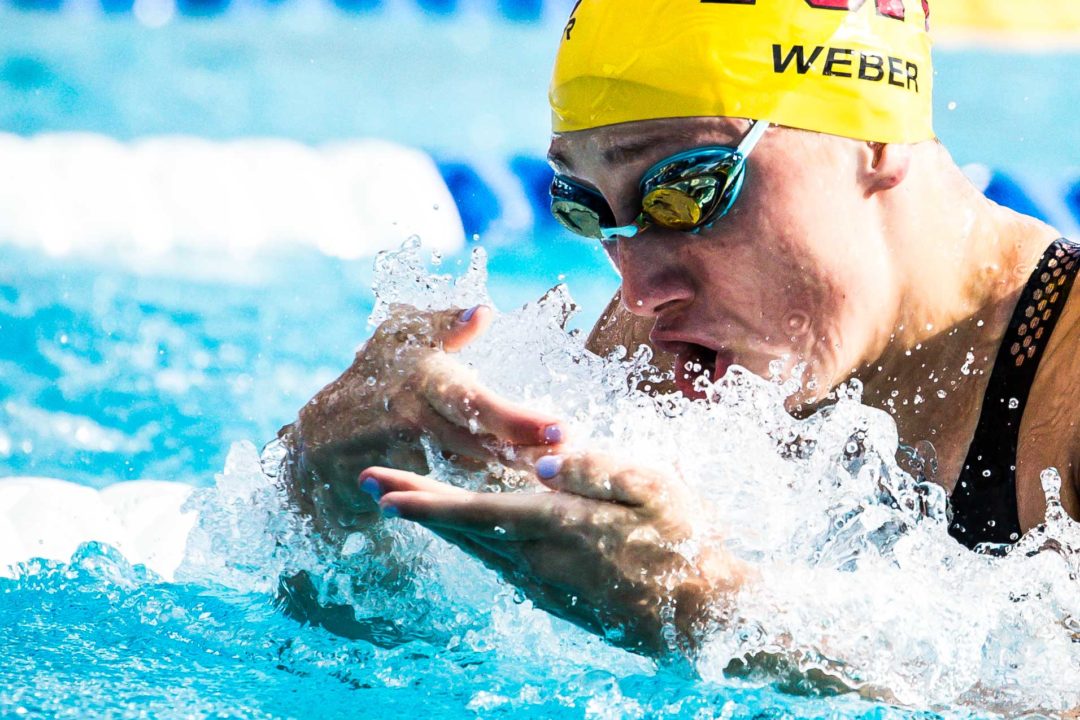 High School junior Emma Weber broke one of the two oldest pool records on the books at the University of Denver's El Pomar Natatorium this weekend. Archive photo via Jack Spitser/Spitser Photography

Each session had around 40 athletes, which in combination with 4 officials, 3 coaches, and a console operator, put the event in compliance with the current Colorado Public Health Order limiting gatherings to 50 people or fewer.

In a marathon meet, athletes ran back-up buttons, coaches timed, and 6 sessions were run per day. The first session was a “prelims” for elite athletes with a 200 relay and some individual events, and the day concluded with a “finals” session for the elite swimmers. In that “finals” session, the team ran through the entire event line-up, took a 15 minute break, and did it again. On top of that, there were time trials at the end of every session to accommodate any one-off needs.

It was a strenuous and hectic undertaking and an unusual format, but in the end, all of the work paid off with a number of best times and nationally-ranked results.

That included a pair of Pool Records.

One such record was set by rising high school senior and Stanford commit Anna Shaw. She swam a 48.88 in the 100-yard freestyle, which knocked a second off her previous best time of 49.85 set at Winter Juniors – West in December.

Already a sub-23 second swimmer in the 50 free, that swim elevated Shaw’s event profile for Stanford. Stanford had a 48.5 on their 3rd-place 400 free relay, on a rolling start, at last year’s Pac-12 Championships, and it took a 48.9 to qualify for the A-final at Pac-12s last season.

That swim by Shaw took out the University of Denver Pool Record of 49.86 that was set by Lauren Votava in 2016 during her senior season at Minnesota.

Shaw’s Full Results from the meet:

Shaw swam best times in all 4 events she raced, including twice in the 100 free.

The other swimmer to break an El Pomar Record at the meet was uncommitted rising high school junior Emma Weber. She only swam the 100 breaststroke once, but posted a new Pool Record of 1:00.71. That broke the old Pool Record of 1:01.68 that was set in 2006 by Florida Atlantic’s Ellie Weberg.

That 10 breaststroke record was one of two records set in 2006 that shared the honor of oldest Pool Record. The remaining mark was also set in the 100 breaststroke by an FAU swimmer – Kevin Bartell, who holds the men’s mark in 54.30.

Unlike Shaw, Weber’s record-setting swim wasn’t a lifetime best – she’s been 59.74 in the 100-yard breaststroke.

According to head coach Shawn Smith, the team was completely out of the water for 96 days during the pandemic. The team began slowly returning to the water on June 17, with limited pool time, and since July 22 the team’s top groups have been swimming 7 sessions per week at 80-85 minutes each.

Because of limitations on doing drylands at the University of Denver, athletes have continued to do dryland training on their own, Smith says. He says that his team had “extensive” dryland training pre-COVID that equipped them for success in independent dryland work.

Other Highlights and Event Winners: