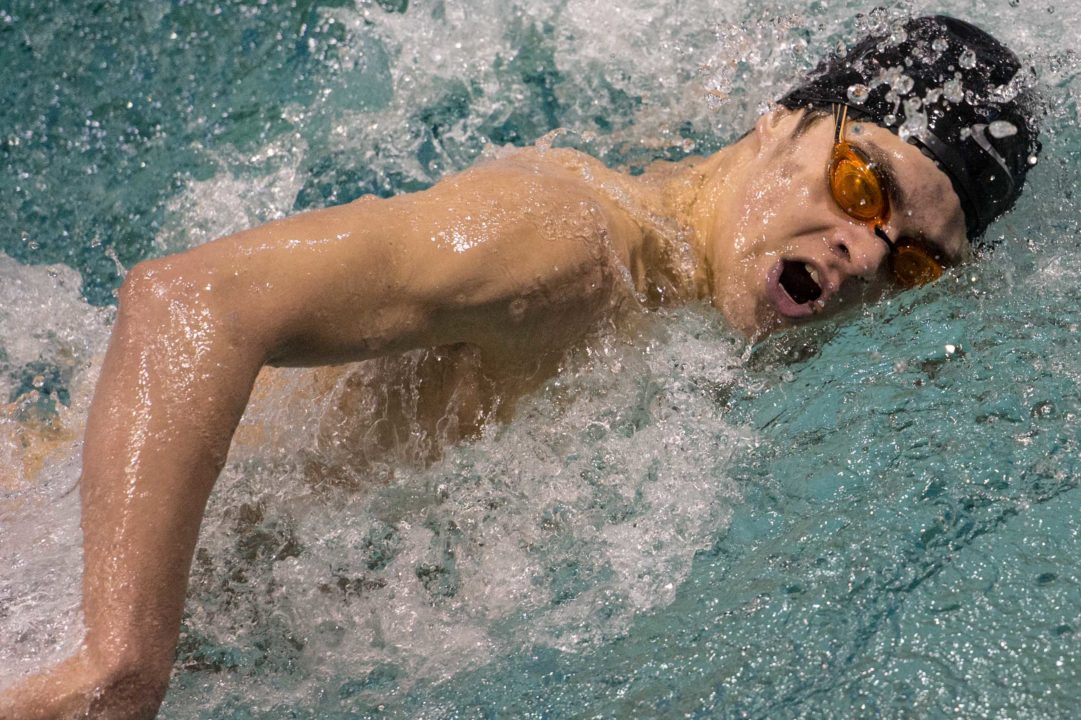 Marciano, most known for his backstrokes, and Andrew, the first 14-year-old to break 20 in the 50 free, somewhat traded roles tonight, with Marciano breaking the 11-12 50 free NAG held by Andrew and Andrew crushing his record in the 200 back.

The meet breaks each age group into its own finals heat – so the top 10 13-year-old qualifiers compete in their final, while the top 10 14-year-old swimmers race in the next heat.

Andrew, meanwhile, broke his own 200 back NAG for the second time in a day. His 1:43.15 knocked another second off the mark after he lowered it by a second at prelims.

The second win came in the 50 free, where Andrew went 19.83 to win handily, though he was still a tenth off his NAG in the event. Also fast in that heat was Daniel Krueger, who went 20.28 for second place, not too far off what the 13-14 NAG was before Andrew got his hands on it earlier this year.

Andrew made it 3 wins for Indie Swimming on the night, going 24.74 to win the 50 breaststroke in the 14-year-old division. There are no NAG records kept in 50s of the strokes for that age group, but that time is still a blistering one for the versatile Andrew.

Another double-winner was Nation’s Capital’s Katie Mack. She won the same combo as Marciano in the 11-12 division, pacing the 200 back and 50 free. Mack’s 2:00.57 was a good 1.5 seconds off her lifetime-best, but still won the 12-year-old heat by five seconds. She saved her best stuff for the 50 free, though, going a career-best 23.65 to win the event, holding off Clearwater’s Christina Cianciolo (23.83 for second).

In the 9&under finals of those two races, Nova’s Zoe Dixon went 30.03 to claim her own runaway victory in the 50 back, while Allie Hathaway out of Rochester, Minnesota went 1:20.62 to take the 100 breast heat..

In the girls 13-14 200 back, Kristen Romano of Town Wrecker Swim Team went a lifetime-best 1:58.24 to crush the field. She won by 6 seconds in her heat and also topped everyone in the 13-year-old heat by a similar margin. That race went to Katrina Marty of Southwest Aquatics with a time of 2:04.65, touching out Emma Muzzy by just two tenths.

The 50 breaststroke in that age group went to Olivia Paoletti and Rabea Pfaff. The 14-year-old Paoletti won her heat for Delaware Swim Team at 29.76, while Pfaff took the younger end of the age group at 30.16.

In the girls 13-14 50 free, Serena Derderian won another race for the Delaware Swim Team. Her 23.61 was the fastest time overall, and the Bolles School’s Audrey Trieu went 23.99 for second. The 13-year-old’s heat went to Kaitlyn Barth of Southwest Aquatics. Her 23.95 was just enough to edge out Kasja Dymek by a tenth.

wow, Michael’s NAGs are already getting broken! the kids these days!

Yeah isn’t that nuts? Marciano with an incredible 50 free time. And Krueger not really that far off from Michael Andrew!

If Thorpe Hagino Gyurta swam SCY.. or Phelps tooks it seriously.. how great could the SCY records be ?

I don’t know if these results are real or not

Those are not times from the right age. Seems like a meet is in the database with the wrong date.

There are a bunch of times entered from the 1996-2001 seasons that were just generic dates and meets. They were downloaded into the database when it was developed in June of 2003.

Of course MA will be the big star of that meet, but Katie Mack and Vinny Marciano will also make the show.
Day 1 results here
http://www.fastswimresults.com/wp-content/uploads/2014/04/wedfr.pdf