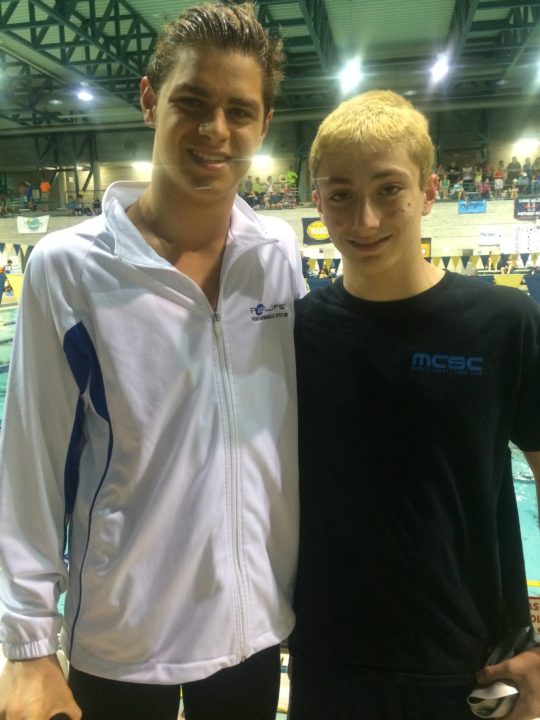 12-year old Vinny Marciano of the Morris County Swim Club in New Jersey is best known for his skills in the backstroke races, where he has many times broken National Age Group Records in the 10 & under and 11-12 age groups.

After Wednesday, he’ll begin to get more-and-more recognition for his other strokes too, which have always been very, very strong, if not quite as good as his record-breaking backstroke.

In Wednesday’s finals at the 2014 NASA Showcase Classic, Marciano swam a 21.78 in the 50 yard freestyle. Not only was that more than a full second improvement ahead of his previous lifetime best, swum in January, but that also broke the 11-12 National Age Group Record of, guess who: Michael Andrew.

If Michael Andrew is 6’9″ and can rip redwoods out of the ground, this kid must be at least 6’4″.

On a completely less sarcastic note…

Impressive record by Mr Marciano.
Congrats to him.
I expected from him an assault on the 200 back record but he didn’t and redeemed himself by breaking the 50 free record.
He’s definitely good in other strokes than backstroke. His fly and free are pretty fast too.

Hulk Swim, if you want a funny photo with 2 off the most famous US age group swimmers of the moment, here’s one.
http://t.co/WgBvk7UTYr

2 of the most famous US age group swimmers of the moment.
Reece Whitley is 6’6″ and Destin Lasco must be around 5’3″ or 5’4″.
Both kids break NAG records.

With his hair going backwards, Mr Andrew looks more and more like Gary Hall Junior. 🙂
Ok. He still has to take a few pounds of muscle for a perfect ressemblance but there’s something. 😆

I thought the exact same thing!

Will Vinny have a chance to break MA’s 100yard free NAG Record?

Hulk, Vinny Marciano is about 6 feet, which makes Michael Andrew around 6 foot 4 or 6 foot 5