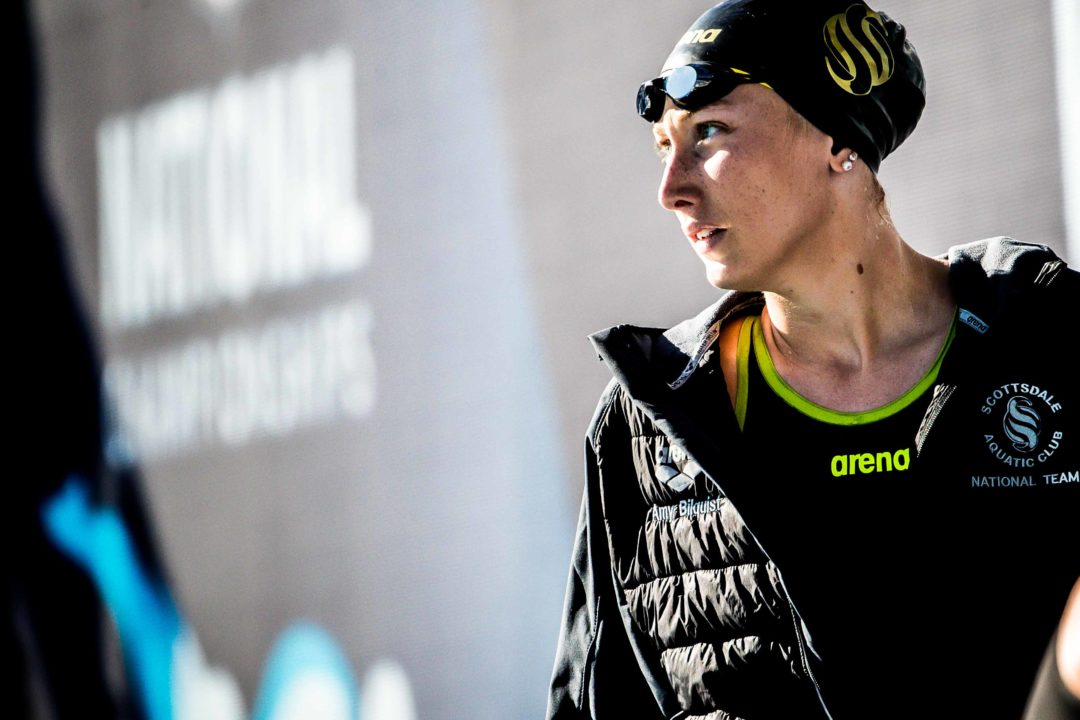 U.S. National Champion Amy Bilquist has dealt with stress fractures in her legs from 2015-2019, broke her foot in fall of 2018, and broke her hand in 2019. Archive photo via Jack Spitser/Spitser Photography

2019 U.S. 100 back national champion Amy Bilquist has undergone knee surgery to remove her plica (a typically harmless membrane fold in the knee present in roughly half the population), address a torn meniscus, and do some additional tendon clean-up.

Bilquist, an American record-holder as part of her alma mater Cal’s 200 free relay at the 2019 NCAA Championships, found out about the need to have surgery right before the start of the inaugural International Swimming League season.

Coming off of a U.S. National Championship in the 100 back this past summer, she chose to hold off on the surgery and push through her injuries to compete with the LA Current this fall.

“I was having severe knee pain since September [2019] when I first saw a doctor and had an MRI. We found some issues with my plica and my patellar tendon had some tears in it. We were hoping over time PT and cortisone shots would help but it continued to get worse. The next (and sort of last) option was surgery. This was in October so it was a tricky time of the season with ISL just beginning. So I decided to postpone the surgery until after the ISL season was over.

I had my plica removed, torn meniscus fixed up (which must have occurred between the time of my first MRI [in September] and now), torn cartilage repaired and some more overall cleanup when it came to my fat pad, other fissures, and my tendon. I’m unsure when exactly I’ll be able to be back in the pool but I don’t think it will take very long. Being young and in shape has the timetable on my side luckily! I’m already slightly weight bearing which is a good sign.

It’s definitely not what I was hoping for (the injury) as it seems that unfortunately, I have a new injury pop up every season, but I’m very lucky I had such proactive doctors who helped me take care of this quickly and that understand my need to get back in the water ASAP! I probably won’t compete until March at the earliest but hopefully. I’ll be back to full swim training in just a few short weeks! Injuries happen to all athletes, unfortunately, swimming is no exception and being a tall athlete comes with its own set of challenges but I’ve overcome many injuries before and this should be no different!”

Indeed, Bilquist is no stranger to injury.

She has dealt with more than 12 stress fractures that put her out of the pool for some time in 2015 and plagued her from the end of high school through the fall of her senior year at Cal. The day after she got out of her boot, post-stress fractures, she broke her foot. That was in October of 2018, the beginning of her senior season. She’d finish the season as an American record-holder with a sub-21 split on Cal’s 200 free relay at NCAAs, among other lifetime bests.

Bilquist then broke her hand last year after her college season had wrapped up, but was able to come back in the summer to win her 100 back national title.

“I’ve broken other bones here and there growing up,” Bilquist told SwimSwam. “Those occurred before 2013, though.”

She says she has broken a rib, collar bone, toes, and thumb in her youth, though those all happened before she moved to Indiana for high school and to train with Carmel Swim Club. She also reiterated that she has done many tests, and there is no underlying condition with her legs, and that the repeated injuries are just unluckiness rather than indicative of a condition that makes her especially prone to lower body injuries.

Bilquist plans to be back to full training in a few weeks, with an intended return to competition in March. After graduating from Cal, she headed back to Arizona to re-up with Scottsdale Aquatic Club, where she swam before her move to Indiana. With the ISL season over, Bilquist will put her full attention on recovery and preparation for the 2020 Olympic Trials.

Get well soon! Looking forward to seeing you race!

A quick recovery to this Sturdy Golden Bear (it’s in the fight song) from another!

I have never seen Amy .even on vid as i don’t watch many races. There was a rash of girls who,took a year from beginning college to train solely for the Olympic trials . They made excellent progress but many seemed to pay for it in college with injuries , fatigue etc. Its just a general impression I have .A professional load on a growing body ..

Whilst we know some swimmers can genetically barely walk , this lower body injury history is on the high side . It is good that she has done some tests but the fact remains the number of broken & fractured bones is an indicator of a shortened life span . They are in… Read more »

Thanks for the diagnosis, Dr. Pop

The other worry is Forensic anthropolgists will dig you up & tell exactly how you lived life by the size & fractures in ypur bones., the ages you did it & everything you’ve eaten . Another reason not to get an eating disorder in a time of plentiful food & no child labour .

Get better quick-your smile and talent will be missed.

Can this girl get a break?

Best of luck in her recovery! I had a less complicated knee surgery in November and am still far from racing ready, but I’m a Masters swimmer without youth and time to dedicate to recovery on my side. I’m sure she will be back at it in no time!

Man, one tough cookie. Go, Amy. Stellar athlete and rooting for you to have a speedy and full recovery!