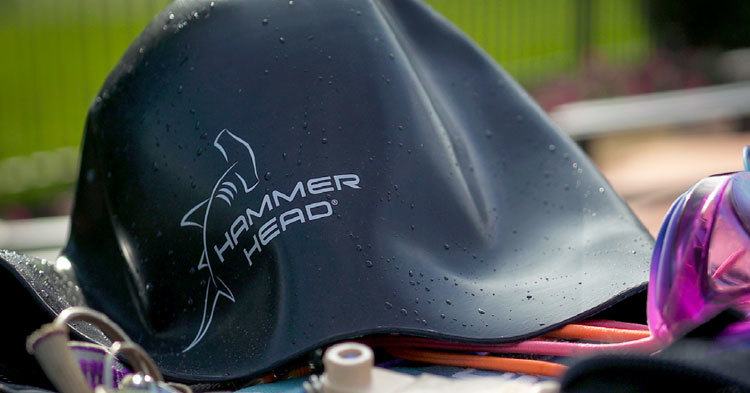 ASCA, the American Swimming Coaches Association, with members all over North America and affiliates around the world, has officially endorsed the Hammer Head® Swim Cap. Current photo via Hammer Head Swim Caps

MINNEAPOLIS – ASCA, the American Swimming Coaches Association, with members all over North America and affiliates around the world, has officially endorsed the Hammer Head® Swim Cap, it was announced today. The innovative new swim cap, which offers swimmers head protection when collisions occur, was recognized as an intuitive and obvious benefit to all aquatic athletes.

The ASCA endorsement comes as the sport of swimming and others around the world turn more attention to head protection solutions for athletes. Findings show that athletes from football to hockey, lacrosse and beyond, can experience serious health issues later in life caused by the results of cumulative bumps and knocks to the head during their careers.

“Once in a great while a ground-breaking new product comes along that is such an intuitive and obvious benefit to athletes that it’s impossible to say it’s anything other than a real winner,” says John Leonard, executive director, ASCA (American Swimming Coaches Association). “That’s definitely the case with the Hammer Head® Swim Cap. Each cap provides protection for any athlete who wears it, making swimmers more confident, which helps them to perform better and have more fun. That’s an easy win in my book, and we’re proud and happy to unreservedly endorse Hammer Head® to our coaching members and their teams around the country and the world.”

The Hammer Head swim cap is a revolutionary breakthrough for swimmers of all ages and abilities, combining, for the first time ever, swimmer head protection with enhanced performance properties. It’s the brainchild of entrepreneur and 20-year swim coach David Burns together with co-founder and sports brand marketing and business development executive Theresa Finn. Burns hit upon the idea for the Hammer Head cap after witnessing his daughter and another competitive swimmer each hit their heads on the pool wall during practice. Together Burns and Finn have spent the past five years perfecting and bringing the Hammer Head to market.

“I’ve coached and taught thousands of kids over the years and can’t tell you how common the risk of head injury in the water really is,” says Burns. “It’s a problem for young kids learning backstroke and bumping the wall, it’s an issue during swim team practices where most of the recorded injuries occur and it’s even more of a threat during swim meet warmups when hundreds of athletes are in the water at one time. With the best will in the world and years of experience, coaches and officials cannot see everything from where they stand on the pool deck. That’s where the Hammer Head cap comes in.”

Every Hammer Head swim cap features HIT Honeycomb Impact Technology®, a proprietary layer of honeycomb material that helps absorb the shock of impact with other swimmers and, the pool wall. Made from a specially selected, buttery soft, premium silicone it’s also designed to be the most comfortable cap a swimmer will ever wear. TEKFIT®, a new kind of fit, also means Hammer Head caps have no wrinkles, improving hydrodynamic performance in the water and reducing drag in competition. Hammer Head caps can be worn double-capped under team competition caps, creating a comfortable and wrinkle-free profile.

“People actually laughed in the 1970s when hockey players first started wearing helmets, “says Theresa Finn, co-founder and CEO, Hammer Head® Swim Caps. “But not now. Head injuries in football are well documented and now other sports like lacrosse, rugby and even soccer are beginning to seek protection for their athletes. Swimming is no different. This is a global issue and a worldwide need, and we’re delighted to have forged such a strong partnership with ASCA so early in our program launch. Their endorsement will be invaluable in our mission to reach as many coaches, teams and athletes as possible with our message to keep head safety top of mind.”

Hammer Head caps are ideal for every age of swimmer, triathletes, synchronized swimmers, divers, water polo players and other aquatic athletes seeking confidence in the water from improved head protection. Caps retail for $34.95 and are available in three sizes – large medium and small. Colors include black, red, pink and royal blue. To place an order visit www.hammerheadswimcaps.com or for team or bulk orders call 1-888-842-515 to be connected with a local Hammer Head sales representative.

Hammer Head® Swim Caps is a patent-pending and trademarked product of Mako International LLC, co-founded by David Burns, a 20-year expert swim coach and swim school owner, and Theresa Finn, a sports brand marketing and business development executive. The Hammer Head Swim Cap is the first major innovation in swim cap design in more than a century. The cap incorporates patent-pending HIT Honeycomb Impact Technology® designed to help absorb the shock of impact with pool walls and other aquatic athletes. Hammer Head swim caps are also designed to provide a better, more comfortable fit that enhances performance. Caps are designed to cover aquatic athletes’ ears to help reduce the in and out flow of water and are more hydrodynamic by eliminating top of cap wrinkles, which in turn reduces drag in the pool. Hammer Head is on a mission to prevent head injuries in the pool one cap at a time.

Since its inception in 1958, ASCA has been the leading voice of coaches in the United States to all other groups, including the AAU and now, USA-Swimming, the NCAA, the National Federation of High Schools, FINA, and others. The American Swimming Coaches Association provides leadership to American and World swimming at all levels. ASCA develops and supports professional coaches and quality career opportunities in collaboration with its partners in the world aquatics community. The organization is dedicated to creating and enhancing solutions that are effective in strengthening and improving the coaching profession, American swimming and World Swimming.

How long until these are banned for being too thick and causing heads to be more buoyant?