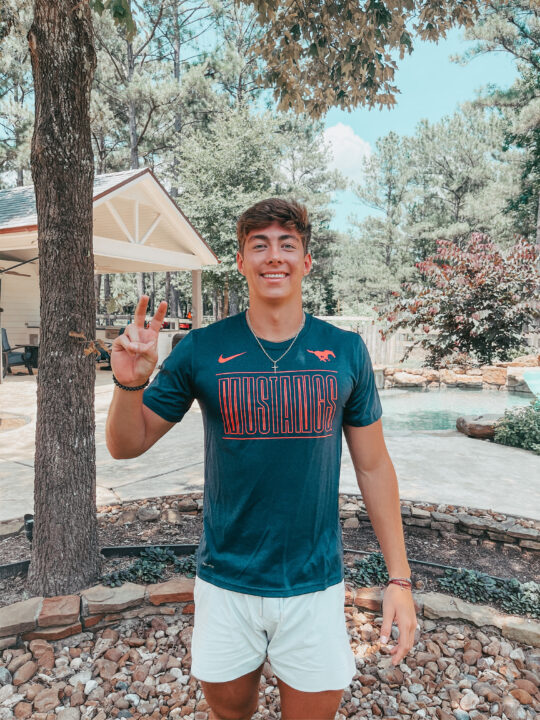 SMU swimmer Elijah Sohn has entered the NCAA Transfer Portal to explore a second transfer after swimming just one race for the Mustangs. College football insiders are suggesting that he might be making a sport switch to college football.

Sohn is an interesting prospect.

He was an all-american swimmer at TAMU last season but is now at SMU. He will play TE at the next level w/ measurements of 6-4.5, 240.

Sohn began his collegiate career at Texas A&M in the 2020-2021 season, where as a freshman he earned an Honorable Mention All-America honor. Sohn split 43.76 to anchor A&M’s 16th-place 400 free relay in the timed-final event.

Because this is Sohn’s second transfer, he would need to receive an NCAA waiver to be eligible immediately. Waivers are granted in cases of family hardship, coaching changes, discontinued academic programs, or if a sport is cut.

Primarily a sprint freestyler, Sohn attended Aledo High School in suburban Fort Worth. There, as a high school senior, he was the Texas 5A (smaller high schools) State Champion in the 200 yard freestyle (1:37.02). He also placed 3rd in the 100 free. He won the 200 free as a junior in 2019 as well.

Sohn was one of two SMU men to enter the transfer portal this week. Also going in was Tyler Mansheim, who won the 100 free title at the two-team AAC Conference Championship meet in February, also entered the portal. Another sprinter, Mansheim has personal bests of 20.23 in the 50 free, 43.63 in the 100 free, and 1:35.69 in the 200 free.

Mansheim, like Sohn, just finished his sophomore season of eligibility, meaning that he has two years left plus a possible COVID-19 waiver season.

Entering the NCAA Transfer Portal does not require a student-athlete to transfer; rather, it gives them more flexibility to contact coaches at other programs to explore the possibility of transferring.

Good luck to him regarding that football desire! Hope he’s not “banking” on that & gets a degree from somewhere👍

Waiting here with the popcorn for all the Aggies to jump into the comment section so the reality comes out. Wonder if we will hear from some SMU team members also.

He lasted about a month at SMU. Never really part of the team…

Perhaps the most famous and successful football/swimmer was a young man named Robin Moore, a breaststroke swimmer (fly style) out of North high school (Phoenix) (All American 100 Breaststroke 1954 at 1:00) went on to play
guard on Stanford’s football team and to swimming fame. On the cover of 1958 NCAA Guide.

In 2003 Dan Priestley swam the fastest 50-yd Freestyle by a freshman in NISCA history.

In 2013 he played football for Jim Harbaugh at Stanford.

Wow. Last guy to flirt with the swimming to football jump was Jonah Turner in the early 2000s. Nearly made the UNC football team as a punter. Saw a photo of him recently and he looked unwell. Hope he’s okay.

Didn’t Mark Seidman play baseball for Akron in the spring while swimming for UNC in the fall? Late 90s. And he was a distance swimmer with the biggest calf’s I’ve ever seen. This kids a sprinter. He can do both

Mark Seidman. Now that’s a blast from the past! I was a season ticket holder for Akron baseball in 1999 when he played. I’ve never seen a more unique swing. It was like something in his pants accentuated the power. He must have had ball bearings in his pockets or something. He belted 69 RBIs that year, then quit for swimming. Too bad. He had talent…

I know of this guy a few years back at USC who tried to make the swimming-to-football transition, Nikolai Syssoev. He swam his freshman year there but dropped off the team mid-year as a sophomore, then the next year tried to play spring football. I presume he was not successful.

Bo could have swum sub 19, you know it. Imagine his start… broken blocks.

Payton brooks swam 4 years at wvu before using a 5th year of eligibility to walk on to the football team as a receiver. I think the year he walked on was 2009, he swam for wvu while Sergio lopez was the coach. He never saw game action in football but got named practice squad player of the year. He’s an assistant coach for VA tech swimming now

Somebody must have showed him the average incomes of pro football vs pro swimming, or it was his Lord.

When u can’t openly hate on people for them existing 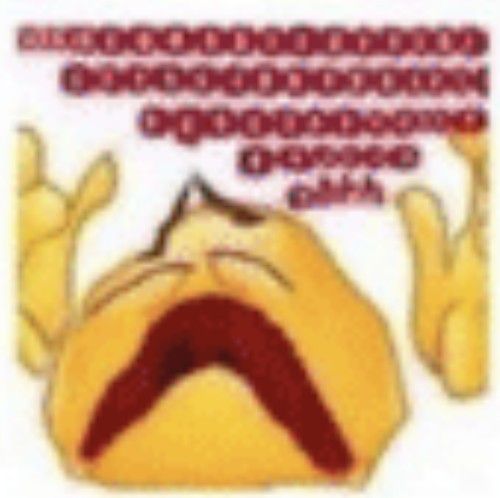