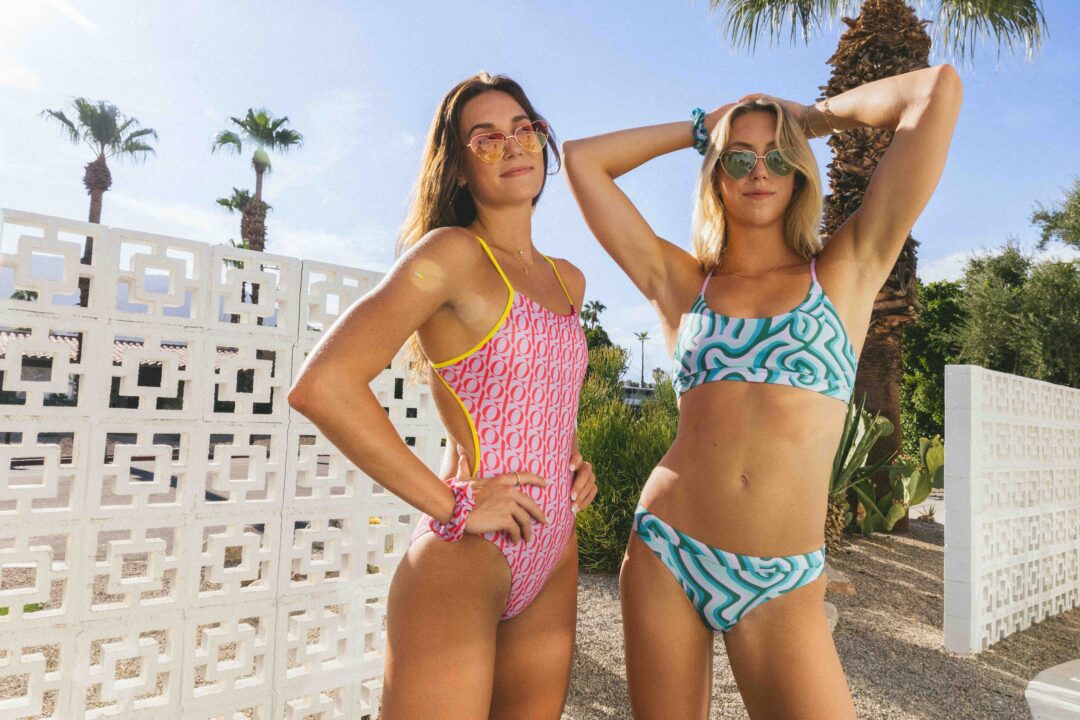 The two sisters, both swimmers at UVA with swimming achievements that run the gamut from winning NCAA Championships to earning a silver medal at the Tokyo Olympics, recently debuted their new collection with swimsuit brand Sporti. They also made history as the first collegiate swim athletes to team up with a nationally recognized brand for a collection, made possible thanks to recent changes in name, image, and likeness policy.

Alex and Gretchen recently sat down with SwimSwam to discuss this brand-new journey.

Traveling the World, All From the Pool

The collaboration between the sisters and Sporti, a brand owned by SwimOutlet, began soon after they both signed with the company. The whole process came together in less than a year, and Alex and Gretchen both said they are working on future collaborations.

Sporti noted that the sisters’ individual collections were inspired by “their sense of wanderlust.” The Sporti x Alex Walsh Collection is derived from Alex’s experiences swimming in her hometown of Nashville, with designs such as “Space Cowboy” and “Boho Bandana,” nods to the city’s unmistakable southern culture.

“[The collaboration] just kind of happened very individually and seamlessly,” Alex said. “I remember talking to the head designers and mentioning how I really liked Nashville, how I like the new contemporary, southern vibe that Nashville embodies. It was also really important to us that we excelled a lot while swimming in Nashville.”

The Sporti x Gretchen Walsh Collection, on the other hand, goes global, tying back to the sisters’ first international competition together in Barcelona. The Barcelona pool itself was Gretchen’s favorite pool to swim in, and her suit designs take inspiration from all aspects of the city, including the mopeds on the streets to the tile patterns you see throughout Barcelona.

“I had the time to talk about myself and my relationship with swimming,” Gretchen said. “We got onto the topic of everywhere that swimming has taken me, and I started talking about Barcelona, and how that was my favorite city to travel to.”

Gretchen also noted that “everyday suits” comprise these collections, and that the sisters went through an extensive trial-and-error process to find a design that was comfortable enough for them to wear to even their more intense practices. But what makes the collections so unique, Alex said, was that they also cater to the more recreational swimmer, making the collections suitable to anyone who wants to get in the water, no matter the reason.

As part of the promotional aspect of the collections, Alex and Gretchen flew to Palm Springs to participate in a photo shoot—the first time either of them have done any sort of modeling.

“Our favorite part was the photo shoot,” Gretchen said, “but it was also the hardest part, because we were in Palm Springs and it was 115 degrees out. It was difficult, but it was worth it, just being there and being able to do that.”

Gretchen said she was nervous the night before the beginning of the photoshoot, she said that it ended up being easier than she thought (though Alex noted that her sister is a lot more natural in front of the camera than herself).

Alex said that they shot the campaign over two 10-hour days, and that it was “pretty awesome” to get that experience.

Ties to the Pool

The Walsh sisters may be celebrating the release of the three-part collaboration, but they can’t rest for long. The two face off against Florida in a high-profile meet in October, fresh off a NCAA win from the 2021-22 season.

Gretchen said that she doesn’t feel a ton of pressure heading into the new season, and that if there is any, it’s self-imposed. Alex added that she’s excited for the Florida dual meet, and that the sisters will be “ready to go.”

The sisters’ competitive but non-rivalrous time in the pool together actually inspired the third part of the collection, the Sporti x Alex + Gretchen Walsh Collection. With a bold metallic gold design, the suit reflects the “champion essence” of the sisters, as well as “the bonds you form with people and their love of the sport,” according to the Sporti press release.

“Collaborating with Alex and Gretchen on this collection was fun, to say the least,” said Daniela Bascuñán, Sporti’s vice president of design, in the release. “The sisters are not only incredible swimmers but creative powerhouses in their own right. They always brought fresh ideas to the table, pushing us to create a collection that was as dynamic as they are.”

Reception to the Collection

The Walshes said that the response to the news of their collection has been wonderful, and that their friends and family all love the suits. They added that they enjoyed being able to add personal elements to the designs, and that the suits reflected their personalities in a relatable way.

Alex added that she would love to see little kids wearing her collection, and that SwimOutlet has always promoted the inclusion of everyone in swimming, both competitively and on a more basic level as a lifesaving skill.

“It’s not about the competitive nature of swimming as much as it’s about having fun with the sport,” Gretchen said.

On some level, the release of this collection is deeply personal to the sisters. Alex said she remembers getting excited as a kid to wear a new suit to practice, and that she hopes other younger girls resonate similarly to the sisters’ collection.

“I hope they know that this collection was inspired by our love for swimming and our love for competition, and that’s the true reason that someone should be swimming,” Alex said. “It’s less focused on the achievement aspect and more on the fact that it’s an opportunity to be a part of a really good culture.”

In addition, Gretchen said that collection is all about confidence, in who you are and your swimming.

“When people see us and wear our suits, I hope that gives them confidence that one day they can be doing the same things we’re doing, that they can go to the Olympics and win a silver medal like Alex,” Gretchen said. “I hope that carries down.”

See their behind the scenes podcast interview here: