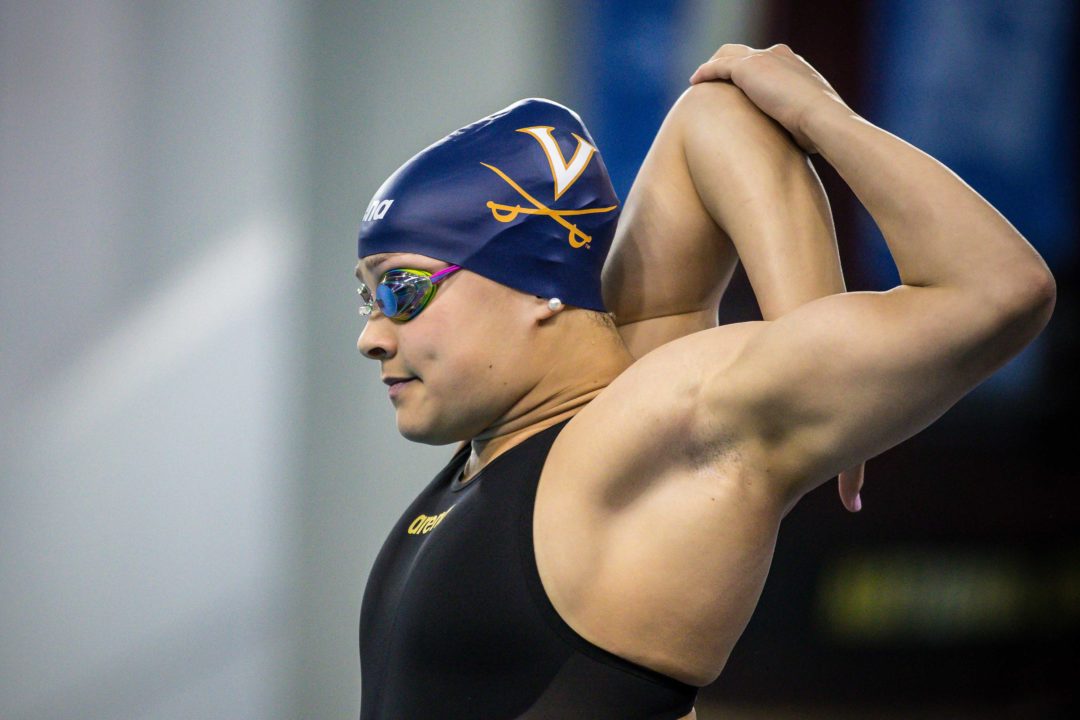 After her 26.0 split on the 200 medley relay to open the meet, when Virginia broke the NCAA, American, and U.S. Open Records, it was clear that junior Alexis Wenger was teed up for a special meet.

She affirmed that on Friday morning in Greensboro by swimming 57.67 to break the ACC Record in the 100 breaststroke.

Wenger’s swim makes her the 6th-fastest woman in history and leapfrogs her ahead of USC’s Kaitlyn Dobler as the top time in the NCAA this season.

Besides Hansson, Wenger will also have to battle her freshman teammate Alex Walsh in finals. Walsh will swim to Wenger’s other flank after a 58.28 in prelims that seeds her 3rd for finals. Walsh, whose best time is 58.19 from 2017, won the 200 IM on Thursday after dropping almost 3 seconds from her prelims swim.

Coming into the meet, the four fastest times in the country this season were done by three freshmen (Dobler, Texas’ Elena Elendt, and Tennessee’s Mona McSharry). Walsh ties McSharry as the 8th-fastest freshman in the history of the event.

How is Ms. Wenger in long course? Possibly she could an Olympic contender in the 100m breast?! Great swim!

Her best LC time in the 100 breaststroke is 1:09.82, but that’s all the way back from the Irish Open in 2015 (part of the NCSA Jr National Team). So, her long course times haven’t progressed the same way her short course times have.

I suspect she’s got better than a 1:09.8 in her; however, right now she doesn’t even have the Trials cut to prove it in Omaha.

Hopefully she’ll be one of the top qualifiers moving on to wave II!

Sorry if my post wasn’t clear: she doesn’t actually have a Wave I cut yet either in the 100 breast in the qualifying period.

Any chance we see a 56 tonight?

Then doesn’t go a PB the next three years.

Its the DeSorbo effect!

You love to see it!

Think she was a multi sport athlete in high school