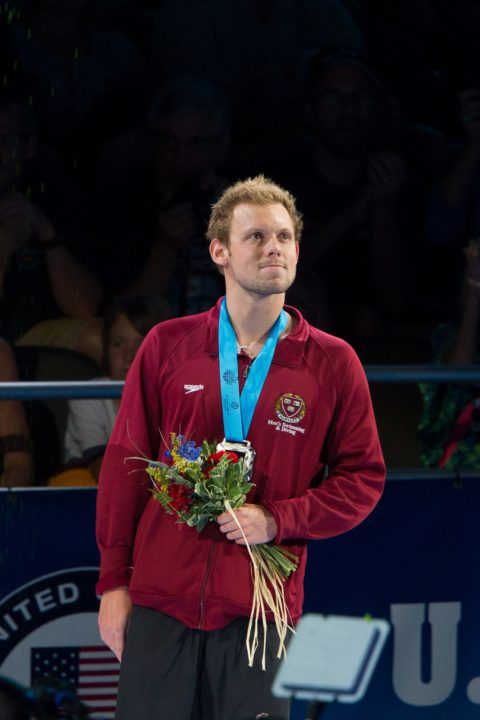 Alex Meyer gives us his last three concerns about the future of open water swimming in part 2 of his editorial. (Photo Courtesy: Tim Binning/TheSwimPictures.com)

Yesterday, 2012 American open water Olympian Alex Meyer brought us part 1 of his  questions that he took into the US Aquatics Sports convention in Greensboro, North Carolina last month. In part 1, that you can read here, Alex talked about water temperatures, National Team guidance, and the cost to athletes of attending the world’s premier open water competition series.

4.       @AlexMeyerSwims: Advocate for change and fairness in the APA selection criteria for open water athletes, allowing for more than two athletes to receive it. Because of the celebrity of a select few of our top athletes, there’s a misconception that pro swimmers make a lot of money when the reality is that most National Team athletes do not. Many post-grads rely heavily on the USAS’s Athlete Partnership Agreement (APA) or “stipend” just to get by so that they can continue to train. It’s been a lifeline for me, as it is the vast majority of my income. Compared to other sports’ National Governing Bodies in the US and other swimming federations around the world, the APA is pretty generous. Professional athletes who have either relinquished or exhausted their NCAA eligibility receive $3000/month in exchange for a couple promotional appearances for USAS per year. Athletes who wish to retain amateur status receive a reduced but substantial amount.

In order to qualify for the APA in an Olympic pool event, you have to be on the National Team (top 6 at Nationals) and have a top-16 world ranking. In the 10k, since time is not a reliable or meaningful standard for one’s performance, it’s more complicated. First, you have to be on the National Team by placing in the top 6 at 10k Nationals. Depending on the year, you then have to place top 16 in the 10k at the major international competition (world championships, pan pacific championships, etc.) of the summer. Since we can only enter two athletes in the 10k at these competitions, there can never be more than two 10k athletes per gender that receive the APA, while it’s possible for up to six athletes in any Olympic pool event to receive it.

I proposed that this qualification criteria be changed to make it more fair for open water athletes, and the National Team Director and Managers were very receptive to the idea. I’m working on putting something in writing as a suggestion for the new criteria that would take effect next year.

5.       @AlexMeyerSwims: Collaborate with others to discuss and propose a USA Swimming Open Water Grand Prix Series in the US to promote the sport to USAS athletes. One of the things I brought up to the open water steering committee, but mostly to the open water development committee is the idea of a domestic open water series in the US. Think about the detailed hierarchical structure and well-defined measures of success and improvement in the pool events that we have in our country. There is a clear path of development through the ranks, which is part of why we are the best swimming country in the world. But there is almost none of that in open water. We have a pretty competitive national championship, but other than that there are hardly any races for kids to go to. I understand that open water is a new event, but the fact is that the 10k is a medal event at the Olympics and we need to do a much better job of promoting this event (I hesitate to call it a different sport) if we want to be successful and be as dominant internationally in the open water as we are in the pool.

We need a series here in the US both from a developmental perspective, but also to provide opportunity for our national teamers and potential national teamers to race and get better. I would like to see USAS create an OW Grand Prix series just like the one in the pool. Ideally, 2-3 of the OW Grand Prix events could coincide with pre-existing, well-attended pool Grand Prix meets, occurring the Sunday after a Thursday-Saturday pool meet. This would be an easy and fun way to generate interest and enthusiasm about open water, and help to narrow that perceived gap between the pool and open water that honestly doesn’t really exist in the first place. It would be easy for some of the swimmers to stay an extra night and try out some open water races.

Everyone on the development committee was in favor of this idea, so I hope that USAS will finally start to take some real steps towards making this happen in the near future.

6.       @AlexMeyerSwims: Offer my opinion on a new Olympic selection process for Rio 2016. The selection process for the 2012 Olympics was long and drawn out, complicated, and made it hard for the top countries to qualify two swimmers, and overall made the Olympic race less competitive. Basically, the top 10 finishers in the 10k at the 2011 World Championships in Shanghai automatically qualified. This past June in Portugal, countries who hadn’t yet qualified an athlete in an event (men, women, or both) could send two swimmers for the chance to qualify one of them. This process was less than ideal for a few reasons:

a.       Making the Olympic Team a year ahead of time sucks. I may be a perfect example of why you shouldn’t select an Olympic Team a year before the actual Olympics. It’s a disadvantage to younger athletes who are improving at a much faster rate. As in my case, injuries and other obstacles can happen that negatively affect performance. I broke my collar bone in a bicycle accident in January and I know that if I hadn’t already qualified by then, I would not have qualified in June and we would have sent another male to swim the 10k that would placed higher than 10th. Also, by the time I actually got to London the excitement of making the Olympic Team was far gone and I was emotionally exhausted from having my life consumed by the Olympic mania for the past year. This was compounded by the fact that Haley and I saw the rest of the swimmers for only a few days the entire summer since we had different training needs, but that’s an entirely different issue. Of the six medals awarded at the Olympics in the 10k, only two of them were 2011 qualifiers, who were supposed to be the better athletes favored to win most or all of the medals.

b.      It’s hard for a country to qualify two swimmers. The only way this could happen is if both athletes were top 10 in Shanghai. Only the Russian men and German men doubled up in the event. This is unfair to the athletes from the most competitive countries who placed just outside the top 10 when a teammate was top 10, since then that country would no longer have a second chance at qualifying a second individual. The result of “knocking out” so many of the top athletes is a more globally represented but less competitive field at the Olympics. If a country only qualified one athlete in a particular race in Shanghai, they should have been able to send another to Portugal for a chance at qualifying a second athlete. Yes, the Olympics is about global inclusiveness, but it’s also about the best athletes in the world. The latter should take precedence with an already small field of only 25 athletes.

c.       “Continental Champions” could not be a second athlete from a given country. At the second qualifier in June, the top 10 athletes (one per country) were selected for the Olympics. Then, five more “continental champions” were selected as long as they were not the second qualifier from a particular country. This is wrong, and again leads to a less competitive Olympic race.

d.      The conditions in Shangai were not ideal as a selection race for London. FINA selected athletes in warm, choppy, salt water, to compete in a race in cold, flat, fresh water a year later. I don’t think I need to explain why this makes very little sense.

This issue was only briefly discussed at convention primarily because it’s not the right time to bring it up to FINA. Many FINA members’ terms end this year, so it makes more sense to start to work at this once new people are in place. A new process that I would propose would be having one selection event at the Olympic venue in spring/early summer of 2016. This event would also serve as the test event for the Olympics. Each country can enter up to two athletes. The top 20 finishers are selected, and then the five continental champions (who could be the second qualifier for their country if it happened to turn out that way). This process is simple, fair, and overall better than the current process from my perspective as an athlete.