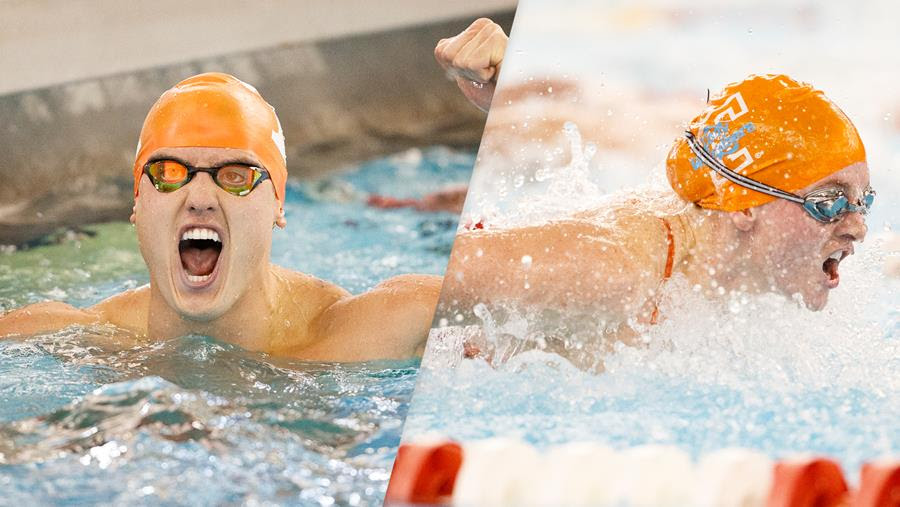 The Volunteer men hosted Georgia Tech Saturday, with the home team coming out on top in a competitive meet.

On the other end of the distance spectrum was Taylor Abbott, who kicked off the meet with a big swim in the mile. Abbott’s time of 15:01.36 hit a ‘B’ cut and moves him to the #5 time in the nation this year. He also won the 500 free in a 4:29.55. For Abbott, his time in the mile was less than six seconds off of his lifetime best, and he outperforms all of his performances last season.

Georgia Tech made its moves at the hands of Pumputis and butterflier Christian Ferraro. Pumputis took the 200 IM by over three seconds, going 1:48.93, while Ferraro went 48.48 in the 100 fly (winning by two-hundredths over Tennessee’s Braga Verhage) and 1:47.63 in the 200 fly.

Vols boys looking tough! Hope they can put it together at SECs! Could there be 2 SEC TEAM trophies coming to Knoxville in 2020???

What a horrible thing to say about a kid. We have no idea what he’s doing in practice or how he’ll do this year.

Just because he has never been good at the end of a season compared to dual meets DOES NOT mean this senior year will be the same. I say give him the benefit of the doubt. Is looks like he will be around 19.1, 41.5 and 1:33.3 at the SEC meet flat start. If so it will be an amazing turn around for him. GO BOY VOLS!!!!

He has accomplished so much, he has earned the right to do that a bit. He didn’t swim year round in high school!

I agree totally with you on this one. Alex is showing impressive results. One gets the sense this year will be markedly different from the previous three seasons during championship period! He is certainly one of the dual meet kings for the 2019/2020 season! I would call him a potential SEC Champion and NCAA All-American in individual events – let’s keep our fingers and toes crossed for this athlete!

This year will different. He’s been swimming faster than ever.

Abbott won three events against Purdue the day before, added to the two he won the next day against Georgia tech, 5 for 5 in 2 days.

Impressive. The senior Vols are on a tear.

Congrats to Tennessee on their great fall dual meet season!