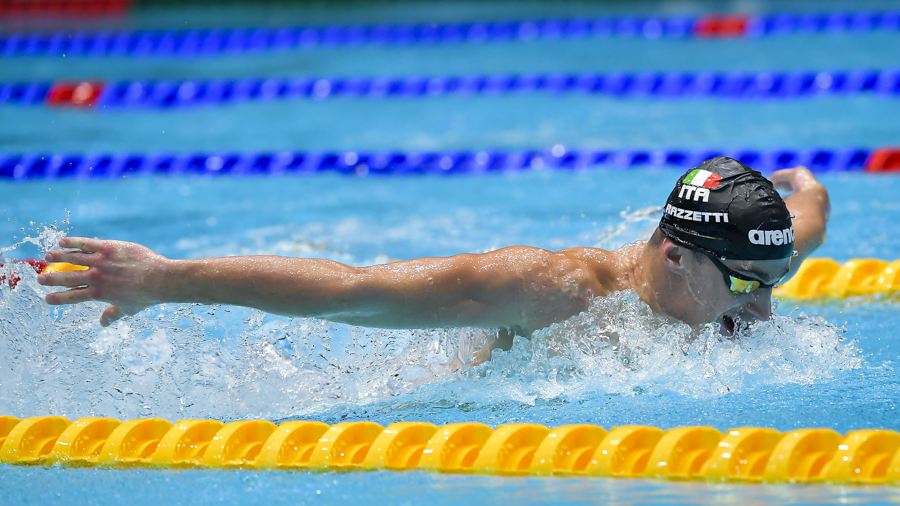 Alberto Razzetti broke the SCM 200 fly Italian record and earned gold with a time of 1:50.24 during the 2021 SC European Championships.

Razzetti lowered his own record in the event, which he had earned with a time of 1:51.15 in September 2021, during Match 9 of the International Swimming League’s regular season. Here’s a comparison of the splits between the two races:

Razzetti’s win was yet another fly upset for Kristof Milak — the first came when Milak was defeated by fellow Hungarian Szebasztian Szabo in the 100 fly. Razzetti beat the 2020 Tokyo 200 fly gold medalist by over a second, though Milak still earned the silver. Razzetti outsplit Milak the entire race, but his final 50 time of 28.86 surpassed Milak’s 29.33.

“I’m speechless. I’m the European champion! My emotions and tensions are very high now!” Razzetti said in a press release. “The time is great, it’s a new national record. This is my second medal today. I was hoping for a medal but necessarily for a win. I could have even gone under 1:50 sec.”

The last few months of 2021 have been major for Razzetti. He broke the Italian record in the 200 fly twice in September, first on Sept. 10 and then again on Sept. 24 as he competed for the Toronto Titans in the ISL.

Also in September, he broke the Italian 400 IM SCM record with a time of 4:01.57. He defeated the 2006 record set by Luca Marin, which was the oldest record on the books for Italy.

At the Tokyo Olympics, he competed in the 200 and 400 IM. He currently has the Italian record in the LCM 200 IM (1:57.13), set before the Olympics at the Italian National Championships.

Also during the same session at SC Euros when he broke the 200 fly record, Razzetti earned the bronze in the 200 IM with a time of 1:52.75, behind countrymate Thomas Ceccon and Greek swimmer Andreas Vazaios.

“I’m overjoyed, it’s hard for me to express my emotions now,” Razzetti said in the release. “I have been growing since the Olympics and learning how to swim really fast at international event and I couldn’t have achieved that without the support of family, my coaches and my team-mates.”

1) For many years 200 fly has been a “critical race” for Italian Swimming while now we have Burdisso (bronze medal at Olympics at not yet 20) and Razzetti (on a tear also in the IMs). 2) In the past Italian swimmers often avoided the doubles, particularly the tough doubles, while today Razzetti has defeated Milak in the 200 fly after the 200 IM that Razzetti had swum previously.

Italian swimming is very strong. Kudos for Burdisso as well.