Abbey Weitzeil on Maintaining Balance, Inside and Outside the Pool 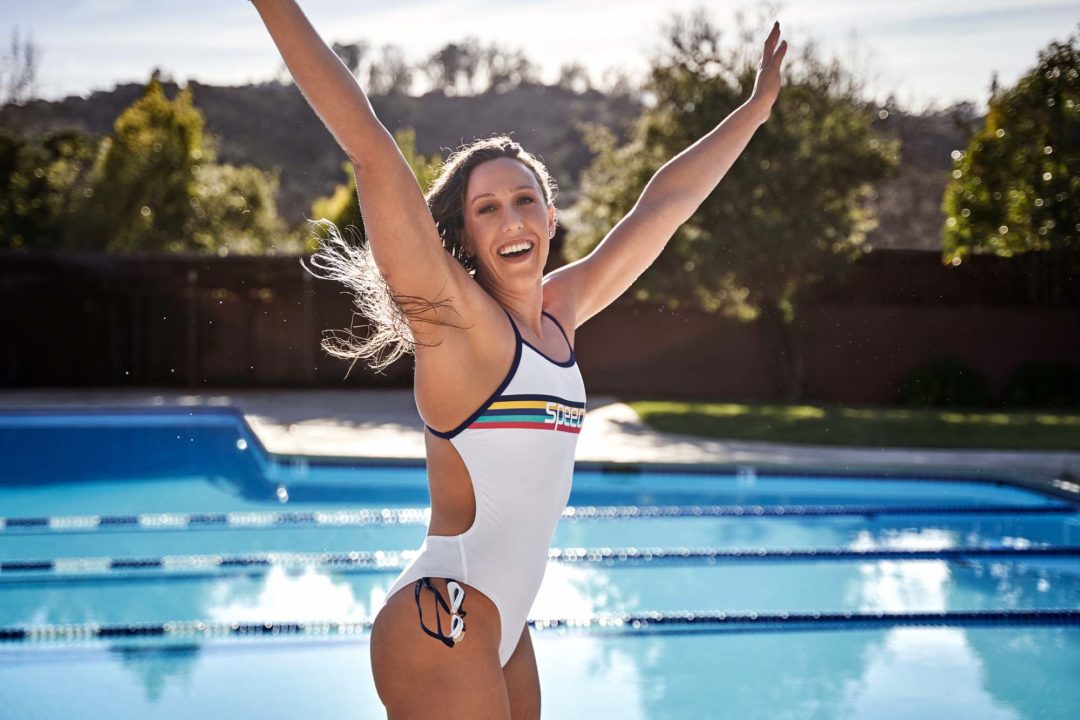 Olympic medalist and Team Speedo athlete Abbey Weitzeil talks about her life outside of the pool and being a pro swimmer. Archive photo via Speedo USA

Abbey Weitzeil may have only begun swimming at age 9, but she’s been making waves on the international scene for years. She’s won multiple Olympic medals, including a gold as a preliminary swimmer in the 4×100 medley relay for the United States.

Team Speedo Athlete Weitzeil is ranked No. 50 on SwimSwam’s Top 100 female swimmers list for 2022, in part because of her successful swimming year in 2021. She set best times in the 50 and 100 free in Tokyo, ranked 15th for women across the ISL as she competed for the LA Current, and earned six medals at Short Course Worlds.

As the 2022 summer schedule shifts and rearranges, Weitzeil sat down with the SwimSwam Podcast to discuss how she keeps her life balanced in the pool, on social media, and in her day-to-day life.

Training with Cal and Learning From Australia

A 2020 graduate of Cal, Weitzeil still swims as a pro with the college team under Teri McKeever. She said it’s a little different from swimming in college, however, largely due to the fact she doesn’t compete with a team.

Because Weitzeil is on a different schedule than the teams, which recently returned from NCAAs, she’ll often swim alone, which she admitted she doesn’t love. For example, she swam with the men’s team while the women’s team competed in college championships, but still swam her own sets because the men were on a different tapering schedule.

As a result of still training at Cal, however, Weitzeil has the opportunity to swim with some of the sport’s best talent, including Maggie MacNeil, who recently announced her transfer to the school for her 5th year of eligibility. Weitzeil said she learned of the potential transfer a couple of months ago, and looks forward to becoming friends with her.

One of Weitzeil’s other friends, Australian Olympic medalist Maddie Wilson, has also informed Weitzeil’s view of the sprinting powerhouse that is Australia. Wilson and Weitzeil became friends during the ISL season, and Weitzeil said she’s intrigued about how the Australians are training to produce so many top international swimmers.

“There’s always more to learn, and Australia has been crushing it,” Weitzeil said.

Weitzeil added that one of her goals before she ends her career is to visit the country and train there, though she still believes the U.S. could give the Australians a run for their money.

Setting Boundaries and Maintaining Mental Health Within the Sport

Weitzeil said that another aspect of being an elite athlete is that boundaries can be tough to manage. In the past, Weitzeil has criticized SwimSwam for its articles comparing athletes, and maintains that athletes should speak up so long as they are respectful, though she usually isn’t as vocal on social platforms.

“Some people are more vocal about their opinions on social media,” Weitzeil said. “I felt the need to be like, ‘Hey, SwimSwam, I didn’t appreciate this,’ and I think… I was stressed out, it was around Trials, and I just said I didn’t appreciate this article. It’s okay to say that, my advice is to always stay respectful, but don’t be afraid to voice your opinion.”

Weitzeil said finding the right balance of speaking up on social media can be difficult, but that being humane is always a safe way to go about things, especially during stressful times on the swimming calendar.

Outside of social media, Weitzeil has been a big proponent of breaking down negative stereotypes and maintaining mental health.

In 2021, Weitzeil was part of Speedo’s Make Waves campaign, where she helped break down the perception that women who have muscles are less feminine. Weitzeil said the campaign was important to her because it was all about female body positivity.

“I was so honored,” Weitzeil said. “It was so cool to be a part of a campaign that means something, too.”

In her day-to-day life, Weitzeil said she tries to keep up a gratitude journal, especially when she has a particularly stressful day. She said the practice stemmed from her time in undergrad, when McKeever gave each member of the team a five-minute journal to complete before every practice. She added that even if she writes about something as simple as taking her dog on a walk, she thinks it is important to find the positive in the day, every day.

Life Outside of the Pool (and Yes, That Includes Flipping A Dresser or Two)

As another way to maintain balance, Weitzeil makes sure she has a life outside of swimming. Otherwise, she would go “nuts.” One of the ways she maintains hobbies outside of the pool is by tapping into her more creative side.

“I’m a very artsy person and I have been for a long time,” she said. “In quarantine we all picked up random habits and hobbies, and I picked up furniture refurbishing. It’s just something fun and artsy to do in the day when I’m not training that gets me out of swimming mode.”

Weitzeil tracks her refurbished pieces on Instagram, and she eventually flips what she buys, selling for a profit.

While she doesn’t know if she could make a career out of it, Weitzeil said that refurbishing furniture helps her feel like she has something else in her life that isn’t just swimming.

In addition to the more hands-on, creative activities, Weitzeil said she loves to watch sitcoms like “Friends” and “New Girl” to help her unwind.

The coming months and years are shaping up to be busy for Weitzeil, as she navigates planning around her friends’ life events and an increasingly cluttered international schedule. Now, meets are scheduled during weddings she hoped to attend, and she said she now has to make the tough decision of deciding which events to go to, and which to give up, something she said has been making scheduling her life difficult.

But even with what she calls “a different level of stress” and her continued life training under intense conditions, Weitzeil said she has no plans to retire.

“I have a couple of years left in me,” she said, “but there’s going to be a time when I’m going to let it go. I’ll be sad, but it’ll be like, ‘I had my run, and now I get to enjoy watching people have their run.’”

Abbey’s 100% Team Speedo. So, what’s in her Speedo bag?  Abbey’s favorite go-to gear was tough question to answer, but she settled on her pink and white Cal cap and her Speed Socket goggles.   On the Speedo topic, Abbey’s loved the partnership, and she’s especially proud of her role in the MakeWaves campaign. She was a part of the “body positive” messaging that was splashed massively across LA skyscrapers.  Abbey’s build an impressive career, and with Speedo it appears she’ll be following through to the 2024 Olympics in Paris.

Thanks to Speedo, a SwimSwam partner.

Great job on this article Emma.