A Humble Attempt to Contextualize Dressel’s 17.63 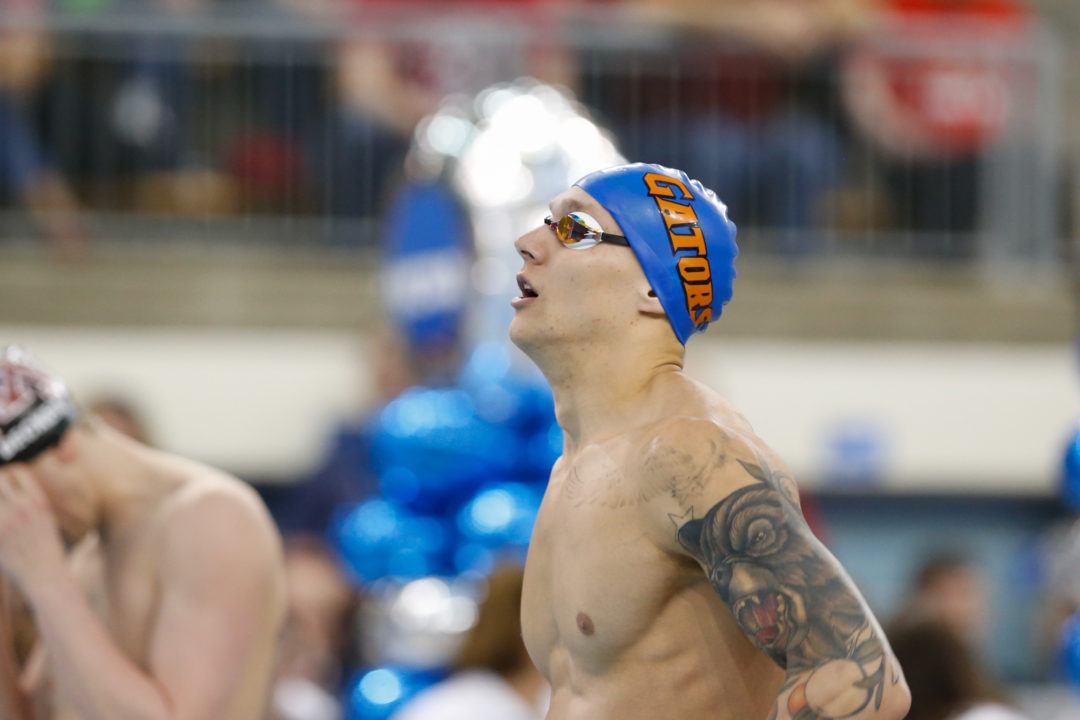 When Caeleb Dressel came onto the scene, the fastest time ever swum in the 50 yard free was Cesar Cielo’s 18.47. Cielo is now the second fastest all-time, but a whopping 0.84s back. Archive photo via Tim Binning/TheSwimPictures.com

I’m trying to put into perspective how overwhelmingly ridiculous that swim is. In the very first article I wrote for SwimSwam, I talked a bit about how much certain people dropped records by. It was only looking at LCM events, but the takeaway was that taking 3% off a record is a tremendous amount of time that’s only happened 12 times in the modern era – by people that we consider truly legendary in their respective events (Phelps, Peirsol, Mary T, Tom Jager, etc.). But even there, this was only looking at record drop. As these giants of the sport changed their events, the world followed – so they were never as far ahead of their competition as these numbers might suggest. When Phelps swam a 49, there was another 49 in the same heat. When Peirsol swam the 1:51.9, Irie was 1:52.5 right there. The drops in the records are huge, but the gaps against the competition is smaller.

When Caeleb Dressel came onto the scene, the fastest time ever swum in the 50y free was Cesar Cielo’s 18.47. Cielo is now the second fastest all-time, but a whopping 0.84s back. The magnitude of that margin is difficult to comprehend. 4.55%. This would be the 2nd largest gap in the original article, but there’s nobody else in that gap. A full 4.55% back to the second fastest person ever. Ryan Held is an Olympic gold medal-winning sprinter, the fourth fastest all-time in this event, and the NCAA final reminded me of the Hulk tossing around Loki like a ragdoll.

4.55% is just a number though. How does that compare to other events? Let’s take a look at some people we consider untouchably dominant in their events. Katie Ledecky in the distance freestyles. In the 800m free, she’s nearly 10 seconds faster than anybody has ever been. She’s taken distance swimming to a completely new level. And yet, how fast would she have to be to equal Dressel’s dominance? 7:51.63.

I took a look at all the other events where currently we think of somebody as completely owning (being at least 1% ahead of the next fastest ever), and this for me really puts in perspective what Dressel’s time really means.

Nice article. Not a lot of room for controversy given title. Thank you.

Arguably it was most impressive for one day.

The next morning Dressel was :17.30 anchoring Florida’s 4 x 50 MR. By bare numbers and a rolling start, clearly the :17.63 is fastest, but when one considers the huge wake of waves and wash he was manuvering through between the big boy anchor legs of Indiana on one side and Louisville on the other … wow. The impressivity meter moves up.

I’d argue it’s one of the greatest demonstrations of “human speed” ever. I’d put it right up with Usain Bolt’s 100 meter dash as the pinnacle of human performance over a short distance in the modern era…

In my opinion, it is not really comparable since the rest of the World does not use Imperial measurements. The metric system is the standard measurement system used pretty much everywhere else. If Dressel swim a 50 free LCM that put the 2nd best ever that far away then it would be arguable. Florent Manaudou never swam a race in yards in his life (neither did the like of James Magnussen, Kyle Chalmers or Cameron McEvoy). I am not saying that Manaudou (or the likes of Amaury Leveaux) would have put up with a 17″63 scy, but the idea that he would have swum faster than 18″47, or that he could have put a sub-18 scy is not too far… Read more »

Stop. I get that we all have swimming biases, but this is straight up delusion

I think human potential on land is much closer to “maximum” on land versus water. For one, humans are land mammals and a much greater portion of mankind can run fast (versus swim fast). So while the talent pool (no pun intended) in swimming might be deeper now versus any other time prior, I don’t think you can say the same about running.

Exactly. But whenever I try to make this point I get downvoted

Great analysis! I’ve had a hard time explaining to people how epic this swim was and this does it!