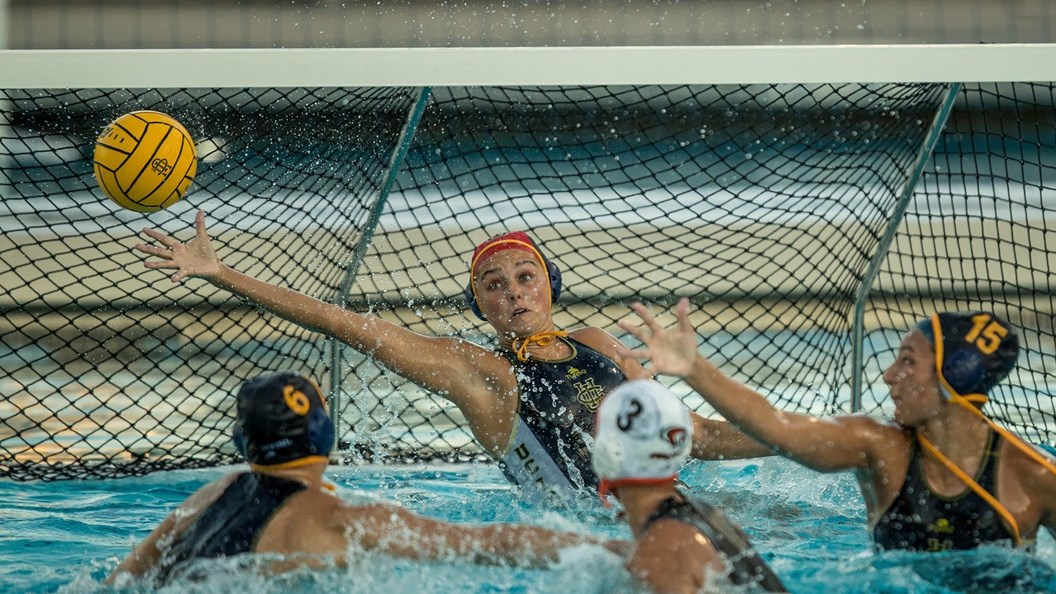 With the UCI win and UH loss, the teams’ both sit at 2-1 in conference play which puts them in a tie for first place in the Big West standings.

The Anteaters improve to 15-8 on the season while the Rainbow Warriors fall to 14-5 overall.

INSIDE THE NUMBERS
> Junior Morgan Jones had an impressive day in goal, notching 10 saves and a steal
> Tara Prentice had two goals, upping her yearly total to 55
> Sarah Nichols, Piper Smith, Kayleigh Schultz, Danielle Ayala and Isabel Rack each finished with one
> The ‘Bows were led by Alba Bonamusa Boix with two goals while Molly DiLalla and Bridget Layburn had four saves apiece in goal
> UCI held a slight advantage in shots, 27-24
> The ‘Eaters struggled in powerplay situations, finishing 0-3, however, UH didn’t fare much better, going 1-4

QUARTER ONE
> The Rainbow Warriors got on the board first scoring with 6:40 left in the quarter
> Rack dished a pass to Ayala who fired in a goal with 2:27 to go followed by another UCI goal, this time from Schultz, with 1:42 left on the clock
> UH’s Irene Gonzalez scored with under 30 seconds left to make it 2-2

QUARTER TWO
> Prentice and Rack tallied back-to-back goals to put the ‘Eaters up, 4-2, with 3:49 to play
> The ‘Bows scored to close out the frame, making it 4-3 at the intermission

QUARTER THREE
> Hawaii held the ‘Eaters scoreless in the third quarter
> The Rainbow Warriors added a goal in the frame to knot the game, 4-4

MORGAN JONES ON TONIGHT’S WIN
“Tonight was an important win for us. Hawaii is a tough opponent and we played them in last year’s Big West Tournament Championship Game which was an exciting, tough game. We are proud of this win but want to keep getting better and prepare for the rest of the season.”

UP NEXT
> UCI host UC Davis Sunday, April 7 at 12 p.m. The Anteaters will honor their senior class at the conclusion of Sunday’s competition

IRVINE, Calif. – In a neck and neck battle, the fourth-ranked University of Hawai’i women’s water polo team fell to No. 8 UC Irvine, 7-6, on Friday night at the Anteater Aquatics Complex. Alba Bonamusa Boix led the way for the Rainbow Wahine (14-5, 2-1) netting two goals. For the Anteaters (15-8, 2-1), Tara Prentice recorded two goals, one assist and two steals.

In the opening frame, senior Femke Aan got Hawai’i on the board first, finding the back of the net at the 6:40 mark. UH’s gritty defense tallied four blocks and one steal in the frame, but UC Irvine’s offense fell through, scoring two straight before Irene Gonzalez netted her first goal to end the period tied, 2-2.

The Anteaters stringed a pair of goals to start the second period, while the Rainbow Wahine struggled to find the back of the net, shooting 0-5 before Elyse Lemay-Lavoie added the lone goal to keep Hawai’i within reach heading into halftime.

Right of out of the gates, the ‘Bows connected on their first possession as van Rossum put through her 13th goal of the season at the 7:32 mark to tie everything up at 4-apiece. UH held UC Irvine scoreless in the frame.

After both teams traded a pair of goals, the Anteaters closed the period on a 2-1 scoring run. Bonamusa Boix added her two goals in the final eight minutes, but the late comeback fell short.

Next up, the Rainbow Wahine will travel to Long Beach State this Sunday for their final regular season road game, with the first sprint at 9:00 a.m. HT.