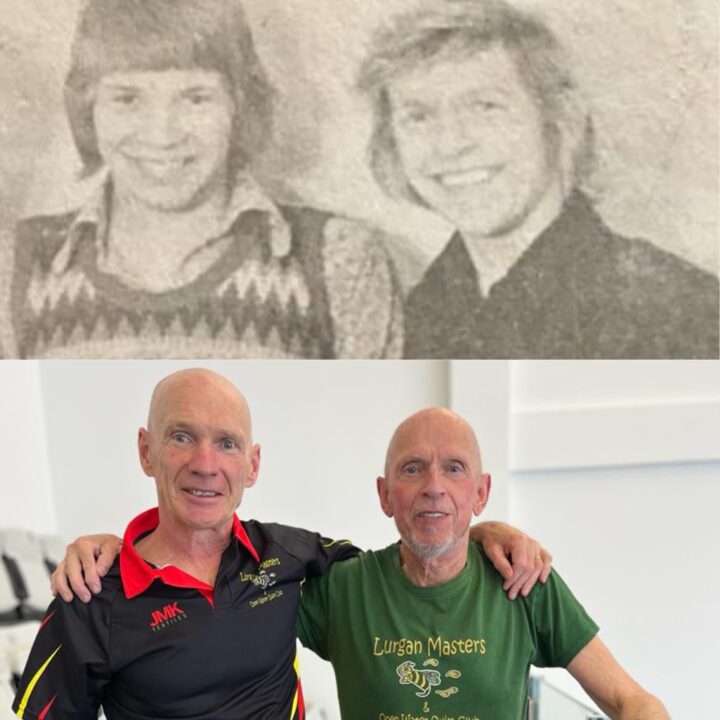 After winning an upset gold medal in the 4x100 medley relay back in 1972 in Ulster, John Irwin and Turlough O’Hagan swam a Masters meet alongside one another. Current photo via Turlough O'Hagan

50 years ago in 1972, four intrepid young swimmers from Lurgan set off for the Grove baths in Belfast hoping to achieve mission impossible. The mission was to be the first non-Belfast team to win the Ulster men’s 4x100m medley relay. They were up against the mighty Leander, most of whom had swum in the Commonwealth Games for Northern Ireland.

The team of Robert Lappin (backstroke), Sean Quinn (breaststroke), John Irwin (butterfly) and Turlough O’Hagan (freestyle) duly succeeded in winning the gold. Robbie, Sean and Turlough were 16, and John was 14.

Turlough and John joined the Lurgan club (then YSAU Lurgan) as soon as the club was formed. Despite the fact that they were from different sides of the “divide” they became lifelong best friends. The Lurgan club and swimming clubs in general were and still are all-inclusive. If it hadn’t been for swimming they would never have met considering that Lurgan, back then, was a very divided community.

Swimming gave the two guys so much to be thankful for in terms of physical, mental, and social health. Robbie moved to Australia and is also still swimming.

Swimming is a sport that allows you to compete into your 60s, 70s, and beyond. At the World Masters Championships in 2019, a new age group was added, 95+.

Masters swimming allows swimmers to reap many positive benefits, train regularly and compete. Some find it ideal to have an event to train for: as Thomas Carlyle said “a man without a goal is like a ship without a rudder.”

Of course, you don’t have to compete you can simply join a masters club, swim with them, and enjoy the camaraderie and health benefits.