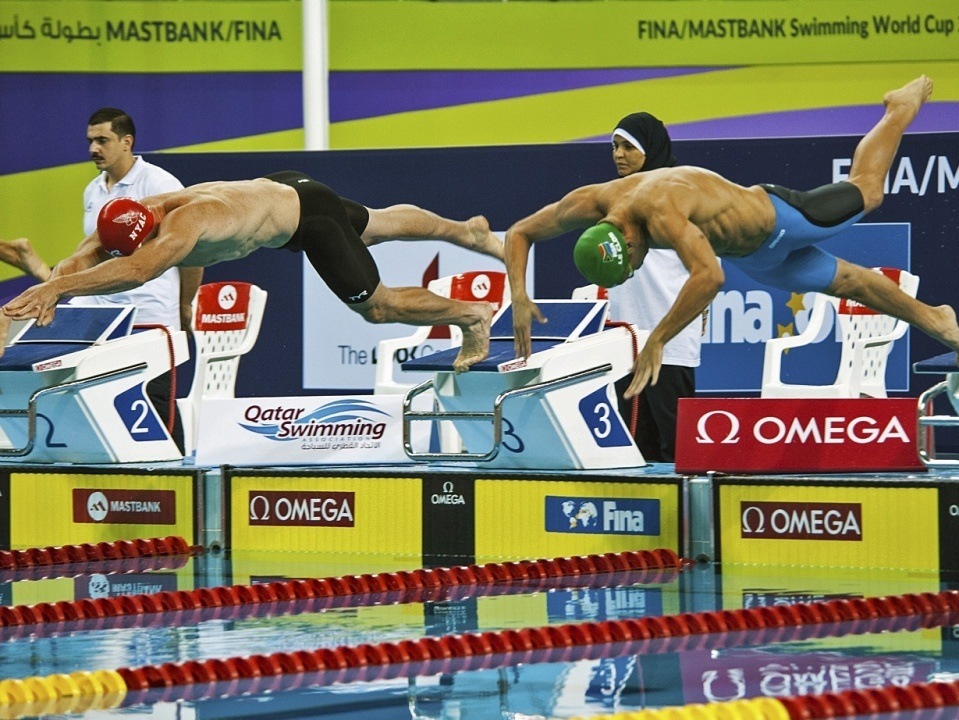 The men's 100 fly semi-finals, with Ryan Lochte (above), Chad le Clos, and Kosuke Hagino, among others, should be an exciting affair. Current photo via Clive Rose/Getty Images

There are no scratches for finals on the first day of the 2014 World Short Course Championships in Doha, Qatar, meaning we get to focus on true finals, with the best prelims qualifiers pushing through.

Below, check out our top 5 things to watch for in day 1’s finals session

Tbe Hungarian women just barely snuck into the final of the women’s 800 free relay as the 8th seed – but that’s an 8th seed without Katinka Hosszu. Their relay, with the addition of Hosszu, would immediately get at least 6 seconds faster as she replaces Fanni Gyurinovics‘ 1:58.34. Finals relay lineups haven’t been released yet, but if Hosszu makes that jump, it puts the Hungarians into medal position.

In prelims, the Netherlands had a huge four-second gap on the field, but that’s unlikely to last at that level. Still, several teams behind them (including the fourth-seeded Americans) have put forth just about their best 800 free relays in prelims. Unless the Americans pull a little trickery (maybe Elizabeth Beisel in finals), they’ll have to make up that time by just getting better.

Cesar Cielo is on a quest to break the World Record in the 50 meter free at this meet, and if his first relay heats swim was any indication, he’s on target so far. Cielo had the best morning swim by over a second, splitting 45.53 on his second leg. Consistency on his start, however, has been Cielo’s challenge, so he’ll need to be able to match that intensity in the 50 free coming off of a flat-start.

Chad le Clos may have won FINA’s World Swimmer of the Year award, but Japan’s Kosuke Hagino, to most observers, was the world’s best swimmer in 2014.

That debate won’t get a deciding result until Thursday’s finals, but the semi’s of this 100 fly will build the intensity in a big way, as Hagino will be middle-lane in heat 2 (49.83), and le Clos will be middle-lane in heat 1 (50.35). Hagino got a small tick on his side of the tally with his Asian Record in prelims, but le Clos has as much race experience in short course meters as any male in the world, and he will show up when it counts.

This men’s 100 fly is one of the best fields we’ll see all week – behind those two are Lochte (heat 2), D’Orsogna (heat 1), Shields (heat 2), and the World Record holder Korotyshkin (heat 1). Pawel Korzeniowski, Steffen Deibler, Nicholas Santos, Yauhen Tsurkin, and Qibin Zhang all have the possibility to not only make the final, but get under 49 seconds and challenge the Meet Record. Japan’s Takuro Fujii was left on the outside-looking-in because of how deep this field is.

With World Records, National Records, and Continental Records galore in the cross-hairs, I can’t remember the last time I was this excited for a semi-final at any meet, let alone a short course meet.

4. Can Belmonte Give Hosszu a Challenge in Double Finals?

The aforementioned Katinka Hosszu, with 10 individual entries, is going to own the women’s side of this meet – even if on sheer volume of medals alone. The thing is – before Hosszu owned this meet, Spain’s Mireia Belmonte owned this meet, and Belmonte is both very good in short course meters, and very good in the two finals (200 fly, 400 IM) where the two will meet head-to-head in finals.

On day 1, it’s hard to see Hosszu being beat, but Belmonte is still really good in short course. Tonight is not the only, last, or even best opportunity for someone to take Hosszu down (that probably comes in the 800 free), but even a split would change the entire tone of this meet.

The men’s 200 free final field is almost as good as that 100 fly with Lochte, le Clos, the European champ Stjepanovic, a resurgent Danila Izotov, and Venezuelan Cristian Quintero all in the top 8.

But ahead of them, in his first career World Championship final, is Hungarian Dominik Kozma, a 21-year old, in 1:42.35. That’s already a full second (.99 to be precise) faster than he was for a bronze medal at the European Championships last year, with most of that difference coming in the front-half of the race.

There’s a lot of guys who look like they can go 1:41’s or 1:40’s, though. A few (Lochte, le Clos) will have a decision to make about energy conservation with the 100 fly semi final later, but even then a 1:42.35 is unlikely to hold up even for a medal. Quintero broke a National Record in prelims of the 200 free and still has expectations of improving is 1:42.40.

This is the first medal race of the meet, and it should be a good one with lots and lots of action. If Stjepanovic or Quintero can separate themselves early, it will be their race to lose, with the best endurance of the field. Expect a race for fans of the tactical side of swimming, and expect lots of back-and-forth action.