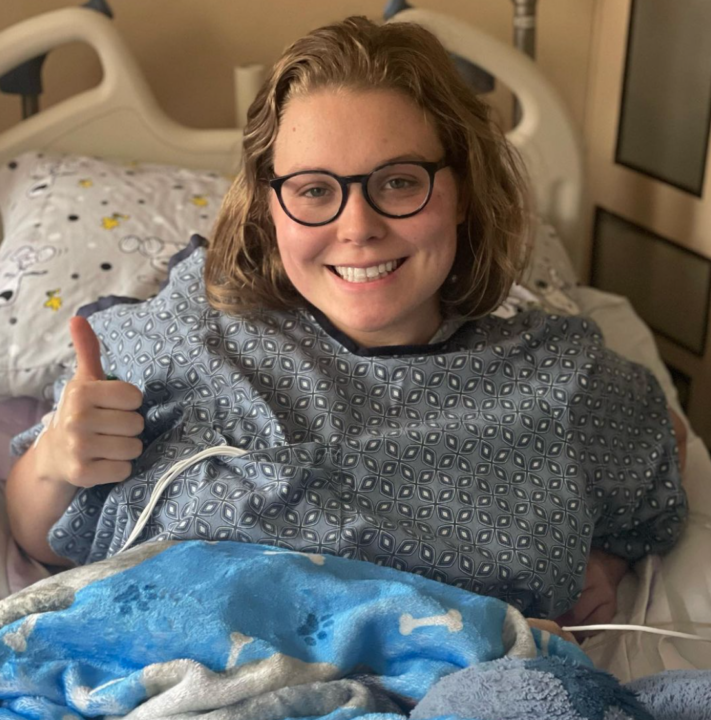 Stickney won the Women's 400 meter freestyle S8 at 2022 Para Worlds. She has since undergone surgery last week and has another surgery scheduled this week.

Less than a month after winning a World Championship, American swimmer Morgan Stickney has undergone surgery, with another scheduled for later this week.

Her first surgery on June 29th was to have her legs amputated shorter, and her surgery scheduled for July 6th is to repair a torn labrum in her left hip. Stickney told SwimSwam that the road to recovery will be long and that she is currently in the intensive care unit (ICU) at the Duke University Hospital as she has been dealing with complications of a rare vascular disease.

Stickney fractured her foot in 2013, which eventually caused her to stop swimming in 2016. Further diagnostics revealed that she had a rare condition that cuts off the blood supply to her foot. In May 2018, she underwent an experimental amputation surgery that amputated her left leg below the knee.

In October 2019, she had her right leg amputated for the same reason, making her the first person in the world to undergo the treatment on both legs. after finding out she has a rare vascular disorder while dealing with an injury to her right foot.

Stickney had to have her legs shortened further due to a progression of the disease over the last few months.

She also told SwimSwam that she has been dealing with the torn hip labrum since Tokyo, and that doctors are unsure of how it happened. They discovered the labrum tear while taking an MRI of her legs.

“Since Tokyo, it’s been getting a lot worse, and being  (a) bilateral (amputee), it’s difficult because it can inhibit walking and walking properly,” Stickney said.

Since her diagnosis, Stickney has continued to train and compete. Stickney represented the United States at the 2020 Tokyo Paralympics. There she earned two gold medals. She won the women’s 400 meter freestyle S8 in a 4:42.39. She also anchored the US women’s 4×100 medley relay 34 points that finished in a 4:52.40. That relay finished over three seconds ahead of second-place ROC.

Stickney told SwimSwam that she still has the goal of competing in the 2024 Paris Paralympics.

Brave girl, what a tough decision she had to make.

Just checked her instagram. She is not out of the woods yet by any means. Morgan and her parents need our prayers and positives sent their way.

Love Morgan! She is an amazing swimmer! Hope she recovers quickly and makes her way to Paris 2024! Mentally and physically a beast!!