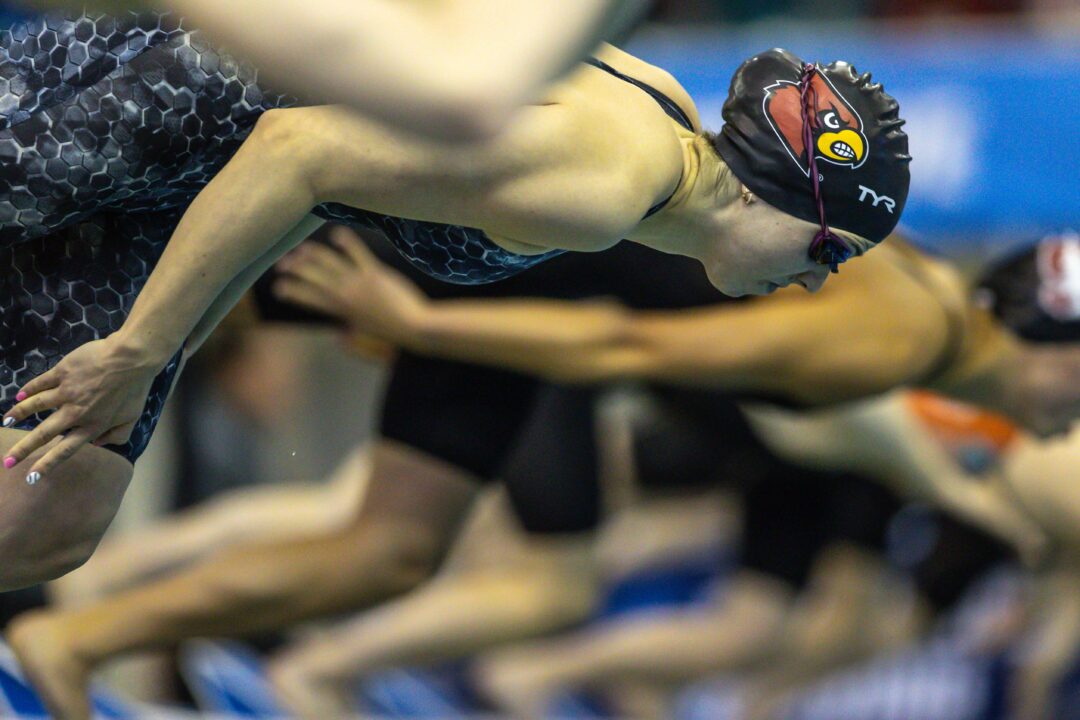 Louisville had probably their strongest showing of the night in the women's 100 fly final, where the Cardinals had the top four finishers. Stock photo via Jack Spitser/Spitser Photography

The second night of the 2022 Purdue Invite is in the books, seeing Louisville expand their lead in the women’s team scoring, while Purdue has closed the gap on the Cardinals in the men’s meet. Heading into the final day of the meet, Louisville is set for a women’s victory, but the Boilermakers now sit just 12 points behind the Cardinals on the men’s side, making it anybody’s meet.

Northwestern finished third, swimming a 1:37.29, but had a sizzling breast split of 25.79 from Jasmine Nocentini.

Nocentini would go on to win the women’s 100 breast in 58.47, touching first by 1.3 seconds. Her performance came after swimming a massive new personal best of 58.31 in prelims this morning. Interestingly, Nocentini split 27.45 on the first 50 of the race. Given her 25.79 split on the medley relay this at the beginning of the session, it would seem Nocentini could potentially take the 100 out faster than she did tonight.

Louisville had probably their strongest showing of the night in the women’s 100 fly final, where the Cardinals had the top four finishers. Gabi Albiero led the way, swimming a 51.18. The time was just off the ‘A’ cut of 50.92. Christiana Regenauer swam a 51.62 for second place, followed by Tristen Ulett in 51.95. There was a gap between third and fourth, as Karoline Barrett swam a 53.08.

Southern Illinois picked up a win on the day, as Celia Pulido posted a 52.57 to win the women’s 100 back handily. She had put the race away by the halfway point, flipping in 25.28, well ahead of everyone else in the field.

Northwestern also had a win on the day. Kevin Houseman swam a 51.83 to win the men’s 100 breast handily.

Can you put some respect on my boy Jonah Harm’s name? He had the fastest split in the 200 medley relay fly leg with a 20.15 on NAVY’s A Relay