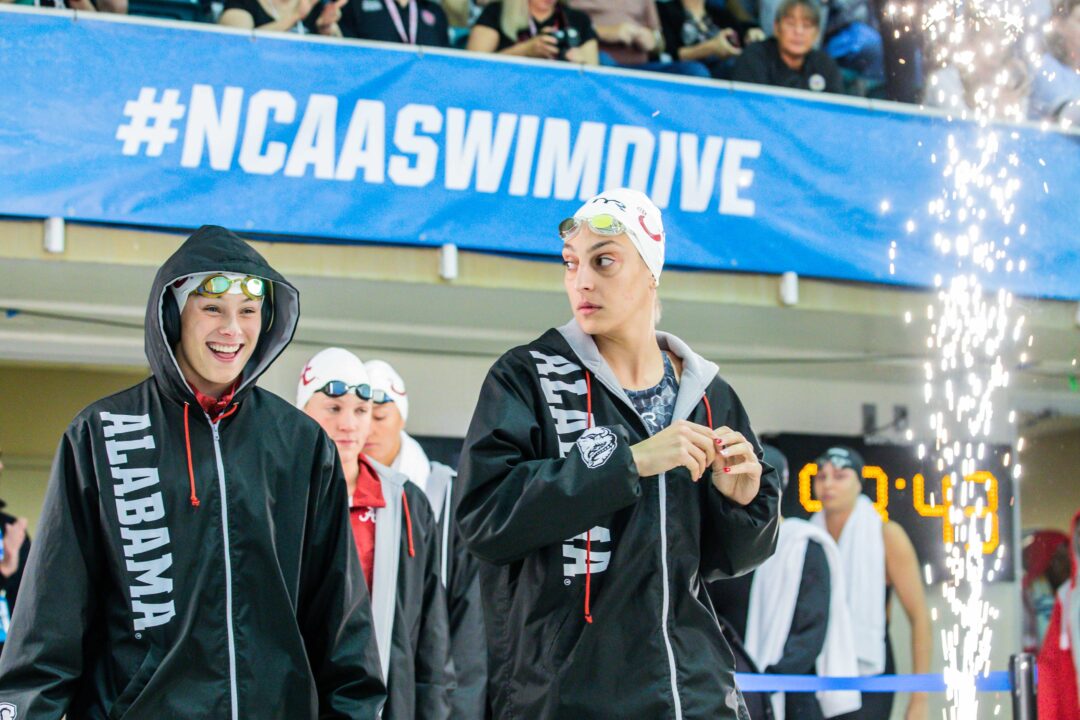 Antoniou (right) was a B finalist in both the 50 and 100 free at 2022 NCAAs. She was an A finalist at 2021 NCAAs in both events as well. Archive photo via Jack Spitser/Spitser Photography

2022 NCAA ‘B’ finalist in both the 50 and 100 freestyles Kalia Antoniou will be returning to Alabama for her COVID-19 fifth year of eligibility.

“Here’s to another year with the best team out there @alabamaswimdive ! So thankful for this opportunity and can’t wait to see what the coming year holds for us…have a feeling it will be the best one yet!
Stay tuned😎 #5thyear“

Antoniou made a huge impact for the Tide at 2022 SECs as she finished second in the 100 free (47.67) and 10th in the 50 free (22.16). She scored a total of 45 individual points. She was the team’s eighth-highest individual scorer even after only swimming two individual events.

At the NCAA level, the Alabama women had a huge meet this past March finishing fourth as a team. The team now will return every relay member as well as all of their individual points.

The biggest difference between this season’s fifth years and future seasons is the scholarship cap. This past season, 5th year seniors didn’t count toward that cap unless they transferred. In future seasons, 5th year seniors will count against the cap, until the waiver expires. This mean’s that Antoniou’s scholarship will count into the team’s 14 cap.

I wonder how they are making all of these 5th years work from a scholarship standpoint. They have a pretty class of incoming freshmen as well.

If the kids they have coming in are on big scholarships they’re in trouble.

Is anyone anywhere not returning for a 5th year?

Wow! This is outstanding news. What do people think, could Bama challenge for the SEC Championship this year? Tennessee seems to be returning a lot of talent as well….can’t wait to watch!!

Then again, I’m not sure which is the higher accolade? Earning a top 4 team trophy at the NCAA championships, as Bama did last year, or winning the SEC championship, as Tennessee did last year? Could a team do both, or with taper strategies, is it better to focus on one of these 2 goals?