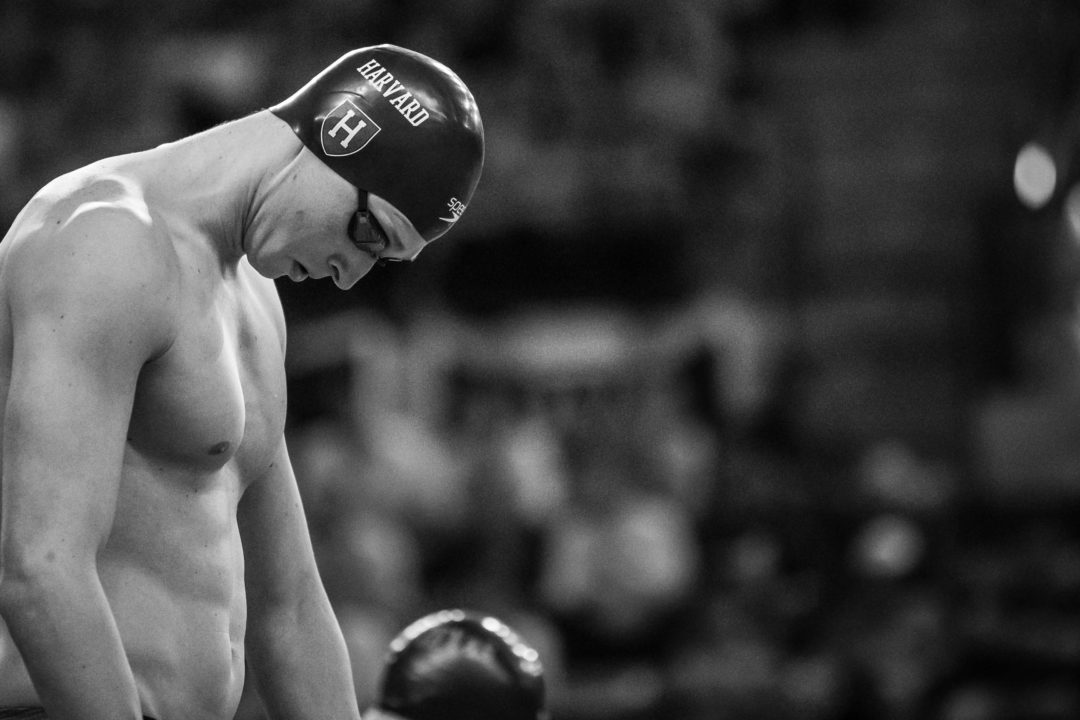 Harvard's Dean Farris returns for his final Ivy League Championship, but Penn freshman Matt Fallon is ready to take his place and step into the spotlight. Archive photo via Jack Spitser/Spitser Photography

The Mids never trailed, but also never had a comfortable advantage as the teams alternated event wins essentially from start to finish.

Trown women’s swimming and diving cruised to a 226-74 win over Cornell on Saturday to close out the dual meet season.

Ethan Wang from California has committed to Cornell with a best time in the 500 that would lead the roster so far this season.

The Men’s Ivy League Championships kick off on Wednesday in Princeton, New Jersey after taking the 2020-21 season off due to the COVID-19 pandemic. Headlining the meet is Harvard senior Dean Farris, who returns for his final championship season with the Crimson. This year, however, he isn’t the only Ivy League swimmer likely to challenge for an NCAA title at the end of the season. Penn freshman Matt Fallon, who is a member of the US National Team and was the top seed in the 200 breast heading into the final of this summer’s Olympic Trials, currently holds the top time in the nation in that 200 breast and stands primed to be the next Ivy League swimmer to step into the national spotlight.

The meet will start with the 800 free and 200 medley relays on Wednesday and follow the traditional 3.5 day conference schedule, with one exception. The Ivy League is the only Division I conference in the country to sponsor the 1000 free at their championships, which will be contested on Friday as a timed final event.

Senior Michael Lincoln is one of the top freestylers in the Ivy League, currently sitting with the league’s 4th fastest time in the 200. He also should challenge for an A final appearance in the 100 free, and was an A finalist in the 500 in 2020. Junior Lukas Scheidl currently holds the 2nd fastest 400 IM in the Ivy League with his 3:51.05 from the Yale dual, and also should contribute significant points in the 500 free and 200 fly. Freshman Jack Kelly will handle the breaststroke for the Bears, currently holding the league’s third fastest time in both the 100 and 200. Senior Horace Qiao projects to contribute B final scoring potential in the 50 free and 100 fly and should C final in the 100 back.

Jonas Kistorp is one of the top swimmers in the Ivy League, currently holding the 2nd fastest 50 free and 100 fly this season. Kistorp should also challenge for an A final appearance in the 100 back, with his season-best of 48.28 ranking him 8th in the league this season. Demirkan is the Lions’ top breaststroker, holding the 5th fastest 100 and 2nd fastest 200 breast in the Ivy League this season, while Li should challenge for an A final finish in the 500 free, 400 IM and 1650 free. Suckow is the top diver in the Ivy League, having been the 2-time defending champion in both the 1 and 3 meter, along with finishing 5th at the 2019 NCAAs in the 3 meter.

In their first season back after being saved from elimination, the Dartmouth men’s program is rebuilding under first-year head coach Jesse Moore. Freestyler Isaac Weigel is the clear star, seed to finish in the B final of both the 100 and 200 free. His teammate Tim Clark is Dartmouth’s second-highest projected scorer, with seeds in the C final of the same events as Weigel.

The last time Dean Farris swam a championship season for Harvard, he was lighting up the pool at the 2019 NCAA Championships. Now, three years later, Farris returns for his senior campaign for the Crimson and is poised to dominate his races and lead Harvard to another Ivy title. Farris isn’t alone, however. Junior Umit Gures is one of the top 100 butterflyers in the NCAA and the two pair with Raphael Marcoux to form some lethal sprint free relays. Gunner Grant holds down backstroke duties for the Crimson, while Jake Johnson projects top 3 in both flys and the 200 IM.

US National Teamer Matt Fallon is the headliner for the Quakers, holding the top seed in both breaststrokes, including currently holding the top time in the nation in the 200 breast. He also comes in with the second fastest time in the 200 IM. His older brother Billy, a junior, is one of the top distance freestylers and 400 IMers in the Ivy League and should challenge for 3 A finals. Senior Keanan Dols, who swam in the Olympics for Jamaica last summer, projects to A final in the 200 back and 200 IM and is on the cusp of the A final in the 100 back. Feldman holds down the sprinting duties for the Quakers, while Schreiber provides excellent depth behind Fallon in the IM and breaststrokes.

Raunak Khosla returns for the Tigers as the heavy favorite in the 400 IM, an event that he has been an All American in. He also comes in with the top time in the 200 IM and 200 fly, giving him a shot to win three individual titles. His teammate Nicholas Lim sits just behind him in the 200 fly, with the third fastest time in the Ancient Eight this year, and also projects to A final in the 200 and 500 free. Porges holds the second seed in both the 500 and 1650 free and should challenge for an A final appearance in the 200 free, while Max Walther projects to A final in the 50, 100 and 200 free. Brian Lou will hold down breaststroke duties for the Tigers, projecting to challenge for A finals in both the 100 and 200.

Noah Millard is the clear leader for this Bulldog squad, putting up the top time in the Ivy League in the 500 free at the HYP meet, as well as the 2nd fastest 200 free and 4th fastest 1650. Phillipe Marcoux, younger brother of Harvard’s Raphael, projects to A final in both the 50 and 100 free, and his teammate Joseph Page projects to join him, giving Yale a dynamic sprinting duo. Conner Kang projects to challenge for an A final appearance in the 200 fly and should score in the B final in the 400 IM.

200 IM: Two of the league’s top swimmers, Princeton’s Raunak Khosla and Penn’s Matt Fallon will go head to head on the first full day of the meet. Khosla is the defending champion and holds a lifetime best of 1:42.80, while Fallon is the upstart freshman who set a new lifetime best of 1:44.03 midseason. Khosla has the upper hand in the front half of the race, but if it is close at the 100 Fallon could come away with the title, as he currently holds the NCAA’s top time in the 200 breast at 1:49.71.

1650 Free: The 1650 free sees the top three seeds all within 3 seconds of one another, with Harvard’s Shane Washart leading the way with his 15:07.49 from the Minnesota Invite. Princeton’s Dylan Porges sits less than a second back, while Harvard freshman Arik Katz has the third fastest time in the league with a 15:10.62. The Crimson should rack up significant points in the event, as current open water National Teamer Simon Lamar is now back competing for Harvard and defending 500 and 1000 champion Cole Kuster has the 6th fastest time in the Ivy League this season.

200 fly: Kohsla comes in as the top seed in the 200 fly as well, but should get a strong challenge from Harvard senior Jake Johnson, who is just a half second behind Khosla this year with his 1:42.99 from midseason. Khosla is the two-time defending champion in the event and has been invited to NCAAs in the 200 fly in both of his seasons at Princeton. Johnson has finished runner-up to Khosla in both 2019 and 2020 and will be gunning for his first-ever individual Ivy title as a senior.

Harvard is the clear favorite in this meet, with the biggest star power and the deepest roster. The meet gets very interesting behind the Crimson, however. Princeton has Khosla, who after Farris is the most likely to win three individual events, and has a strong relay edge and slight diving edge over Penn.

However, the Penn women were on fire last weekend at the women’s meet, which should bode well for the men’s team in a combined program and Matt Fallon is a virtual lock to win both breaststrokes. The race for fourth should also be exciting, with Brown, Yale and Columbia all projected to score within 100 points of each other. Columbia’s ace in the hole is junior diver Jonathan Suckow, who should dominate the boards. Suckow finished 5th at the 2019 NCAAs in the 3 meter and is the two-time defending champion in both the 1 and 3 meter, so we’ll pick the Lions for fourth.

Can I have some of whatever ur on? please

Depends if he shaves and fully rests. Since he didn’t rest all year, his handlers might be letting the leash loose on Poseiden. Probably 1:29.5 and 20.7

Simon Lamar is a CURRENT national team member, not former!

Picking Brown for six is great bulletin material! TY! Btw, they will be 3rd!

Watch out for my boy Noah Brune from Harvard!!

For everything else I fancy a new kid, Fean Darris out of Harvard.

Dean the great to swim 2breast

The second greatest swimmer of all time is ready for some fun.

10
-5
Reply
Inside Smoke
Reply to  Anonymoose

Take a baseball bat to Dean’s knees behind the blocks, splintering the wood upon his steely joints and showering the crowd in a fine layer of sawdust thereby blocking their vision so they don’t see him lose by 8 body lengths.