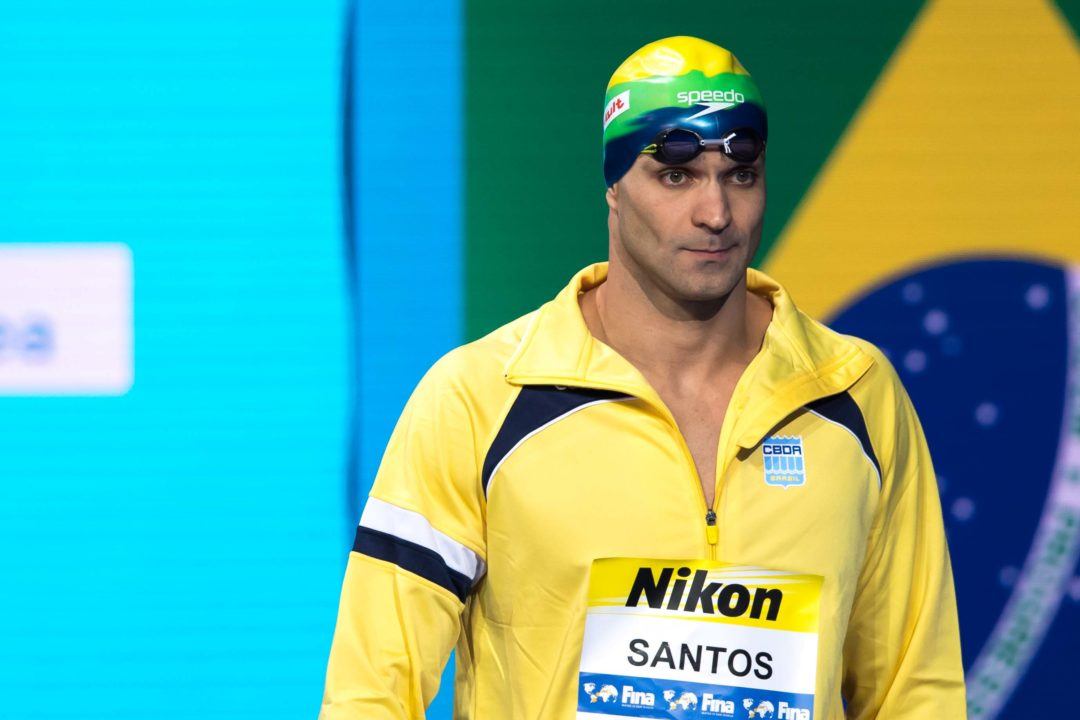 Santos hinted after the 2021 SC World Championships that he would compete one more year before retiring, and it looks like he's sticking with that timeline.  Stock photo via Mike Lewis/Ola Vista Photography

42-year-old Nicholas Santos is competing at the 2022 Jose Finkel Trophy in Recife this week, which he plans to be his final meet on Brazilian soil. Santos hinted after the 2021 SC World Championships that he would compete one more year before retiring, and it looks like he’s sticking with that timeline.

The Jose Finkel Trophy is serving as Brazil’s selection meet for the 2022 SC World Championships, which are set to take place in Melbourne, AUS in December. Provided Santos qualifies for Brazil’s SC Worlds roster, it seems that will be the veteran sprint star’s final meet.

Santos has pushed the boundaries of what was thought to be possible in this sport, winning a world title at the age of 41 last December. He was already the oldest man to win a World Champs medal, honors which he first earned when he won silver in the 50 fly at the 2017 LC World Championships. Then, at the age of 38, Santos broke the SCM World Record in the 50 fly with a 21.75 at the 2018 FINA Swimming World Cup – Budapest.

He didn’t stop there, however, going on to win gold in the 50 fly at the 2021 SC World Champs in Abu Dhabi, making him the oldest world champion ever in the sport by a wide margin. Santos proved his world title wasn’t a fluke, going on to swim a 22.78 to win silver in the 50 fly at the LC World Champs this summer in Budapest. At the Brazilian Championships in April, Santos clocked a 22.73 in the LCM 50 fly, which was the third-fastest time of the year.

Today at Jose Finkel, Santos got off to a solid start, swimming a 51.65 in prelims of the men’s 100 fly. That put him 10th overall, just shy of qualifying for the ‘A’ final. He still showed off some solid speed, splitting 23.58 on the first 50, but was unable to hold onto his pace. Santos also swam on Unisanta’s men’s 4×100 free relay, splitting 47.53 on the 2nd leg to help the team to a bronze medal.

Santos is also set to race the 50 fly and 50 free individually. Lately, Santos’ main focus has been the 50 fly, and that’s really where his hopes of qualifying for the SC Worlds team lies.

Just the nicest and talented athlete.

I secretly hope he re-breaks his own WR at SC worlds to win it what a way it would be to go out. Not sure if it will happen but I wouldn’t at all put it off the table of happening

Sad day for swimming when someone like this has their career come to a close. Truly amazing that he has that drive. 100% one of the seven wonders of the swimming world.

Absolute legend, my favorite event is the 50 fly and I hope one day I’m in my 40s and half as good as he is