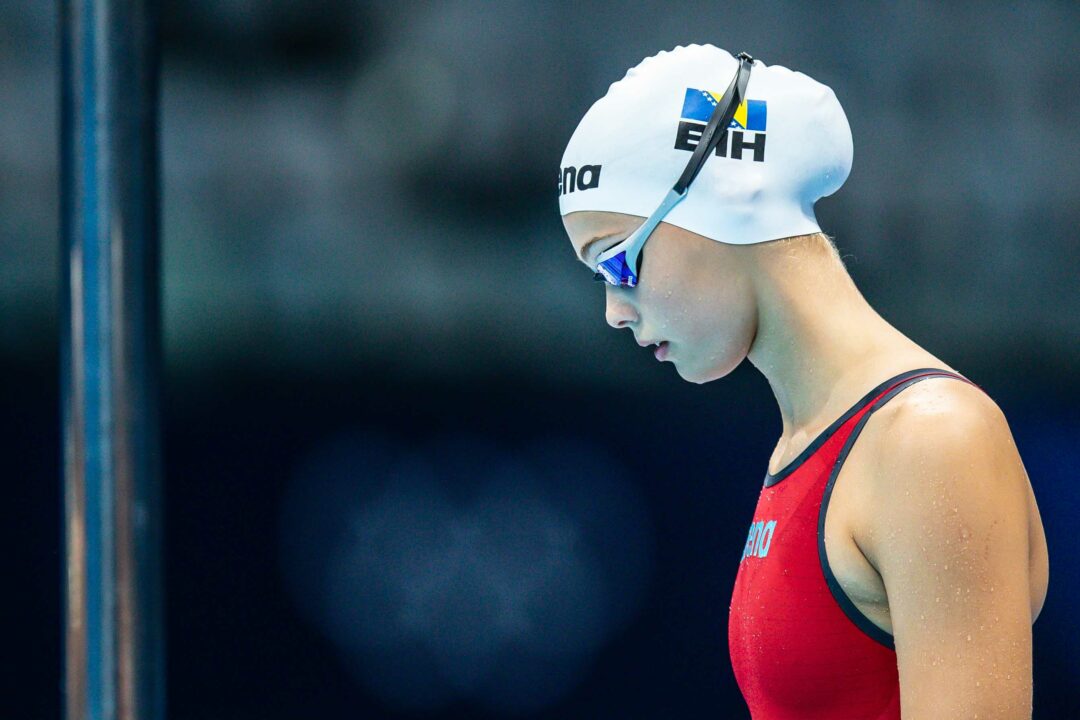 Lana Pudar swam a 2:12.66 in the girls 200 fly in prelims to be the top seed heading into semifinals. She was 6th in the event at Worlds just a few weeks ago Archive photo via Jack Spitser/Spitser Photography

Hungary continued their success into day 4 going 1-2 in prelims of the girls 100 free. Nikoletta Padar swam a 55.65 right ahead of Dora Molnar who swam a 55.68. Padar was the champion in the girls 200 free at the last summers 2021 meet. Daria Golovati of Israel and Roos Vanotterdijk of Belgium both swam the third fastest time of the morning of 55.82.

Michal Judickij of Czech Republic swam the fastest time in the boys 400 IM with a 4:22.93. That was a best time for Judickij. He was the only boy under the 4:23 mark as Hungary’s Zsombor Bujdoso swam a 4:23.34. Slovakia’s Bence Dikacz swam a 4:24.99 for the third seed heading into the final tonight.

Great Britain led the way in the mixed 4×100 medley relay. They opted for the typical male-male-female-female order to swim a final time of 3:54.52 to be top seed heading into tonight. Finishing right behind them was Ukraine who swam a 3:54.64. Third seed for tonight is Italy who swam a 3:55.16. Notably, Great Britain was second in the event last year and Ukraine was third.

Cruising to the top seed in the girls 800 free was Merve Tuncel of Turkey. She swam a 8:34.50 this morning being the only girl under the 8:40 mark. Tuncel will look to defend her title after winning in a 8:21.91 last year which set a Championship and European Junior record in the process.

French swimmers Alexa Reyna swam a 8:42.91 for the second seed in finals and Valentine Leclercq swam a 8:45.94 for third.

Lorenzo Galossi of Italy will be the top seed heading into the boys 800 free final after swimming a 7:53.79 this morning, the only boy under the eight minute mark. His best time stands at a 7:49.76. Batuhan Filiz of Turkey swam a 8:00.19 just ahead of Poland’s Krzysztof Chmielewski who swam a 8:02.61.