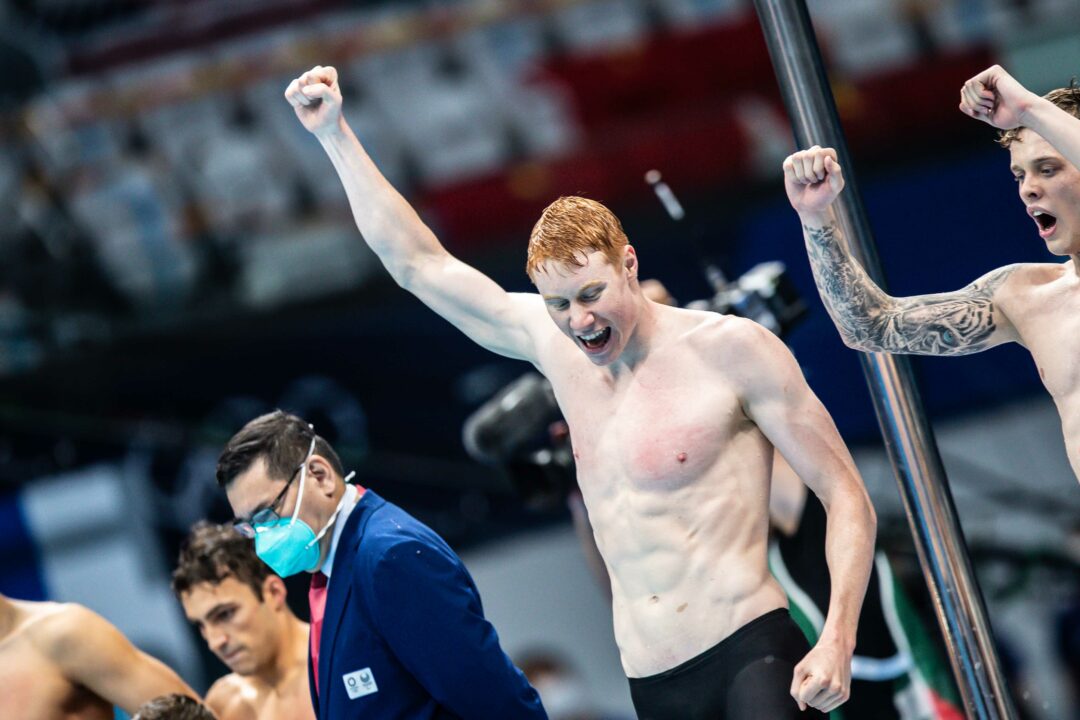 The reigning Olympic champion in the men's 200m free, Tom Dean, led the way in the event on the final day of heats at the British Championships. Archive photo via Jack Spitser/Spitser Photography

We have a stacked lineup on tap for tonight’s finals session at the 2022 British Swimming Championships, the meet which represents the Trials for both World Championships and Commonwealth Games.

Bath captured the top 2 seeds of the morning heats of this men’s 50m butterfly, with Jacob Peters landing lane 4 in a time of 23.61.

That sits just .10 behind last night’s 50m free silver medalist Ben Proud, with Proud punching a mark of 23.71 while Adam Barratt is also in the mix with 23.85.

Proud is the national record holder in this event, having clocked a result of 22.75 when he became the 2017 World Champion. In the following year, the 27-year-old suffered a pair of false starts, which cost him possible hardware at the 2018 Commonwealth Games, as well as the 2018 FINA Short Course World Championships.

Since, however, Proud snagged 7th place in the 50m fly at the 2019 World Championships and finaled in the 50m free at last year’s Olympic Games.

This women’s 100m breast doesn’t have a clear favorite, with any of the top 8 in the running for podium spots in tonight’s final.

The race will need to see at least one person nab a time of 1:06.42 or better to clinch the British Swimming-mandated qualification time for Budapest. In the history of British Swimming, only 4 women own a best time under that threshold, with one of them being Vasey with her lifetime best of 1:06.37 from 2021.

4th seed Kayla Van Der Merwe represents GBR’s 7th fastest woman, owning a PB of 1:07.06 from 2019, so if she’s in form, we may see her get into the possible qualification zone.

Olympic bronze medalist in the 200m back, Luke Greenbank, narrowly made it into the men’s 100m back final here before the Loughborough man ultimately took that event title.

That performance may fuel his will to win this evening in his better event, taking the top seed of the 2back in 1:58.24.nThe race appears to be Greenbank’s to lose, although he is pre-qualified in this event and is most likely not near a rested state for this competition.

Hoping to pick up the 2nd qualification spot is a host of possibles in Brodie Williams, Elliot Clogg, Cameron Booker. 8th position went to Jay Lelliott, the versatile Sheffield swimmer who needs to hack a bit of time off his 1:59.64 PB to get within range.

The usual butterfly suspects are among the top 8 here in this women’s 1fly event, with Harriet Jones in the pole position after having scored a morning mark of 59.11.

A total of 4 swimmers got under the minute barrier heading into tonight, including the 200m fly victor here Laura Stephens, as well as Scottish national record holder Keanna Macinnes.

The 2018 Commonwealth Games champion in the 2fly event, Alys Thomas, is not swimming at these Championships.

In fact, 6 of the top 10 British performers of all-time will be in tonight’s race, making it the marquis event for this evening’s last session.

Scott, who fired off a world-leading 200m IM time last night, led the way this morning with a solid 1:47.22, sitting just .34 ahead of Jack McMillan. Of note, since McMillan is Irish, he will not be present in tonight’s final.

That means Stirling’s Cameron Kurle will flank Scott after his morning result of 1:47.75 while Dean will be on the other side in 1:47.77.

Dean has already been pre-selected for Budapest in this race and has had a tremendous meet thus far, having added the 100m free and 200m IM events to his portfolio for those World Championships.

Just a point of order, Alys Thomas was Commonwealth champion over 200m fly, not 100m fly!

Am I understanding correctly that the 200 free final is for relay spots only, since both Scott and Dean are pre-selected in this event?

Exactly pre selection is pretty ridiculous, although it does come in handy when someone pops a crazy swim at trials and chokes at the big meet, leaving behind the guy who consistently posts good times, which would be dean and Scott for Britain

The 100 is right where his sweet spot is, not enough speed for a good 50 and not enough endurance for a good 200. You see this happening quite often, look at guys like miressi or grousset.

I think that it’s a pattern amongst some of the absolute best 100m Freestylers:
vd Hogenband had really good 50s/200s, but 100 was clearly the best fit for him.
Adrian had world-class 50s, but the 100 just was the better fit.
Chalmers’ 100 is a clear stand-out from his 50/200 performances (relatively speaking).

I think that it’s fair to expect these “neighborhood” distances to naturally improve has he evolves on the 100m, but it may always be his stand-out discipline.

I don’t think at his peak, PVDH’s 100 free was significantly better than his 200 free. Just that the 100 free didn’t have someone like Ian Thorpe.