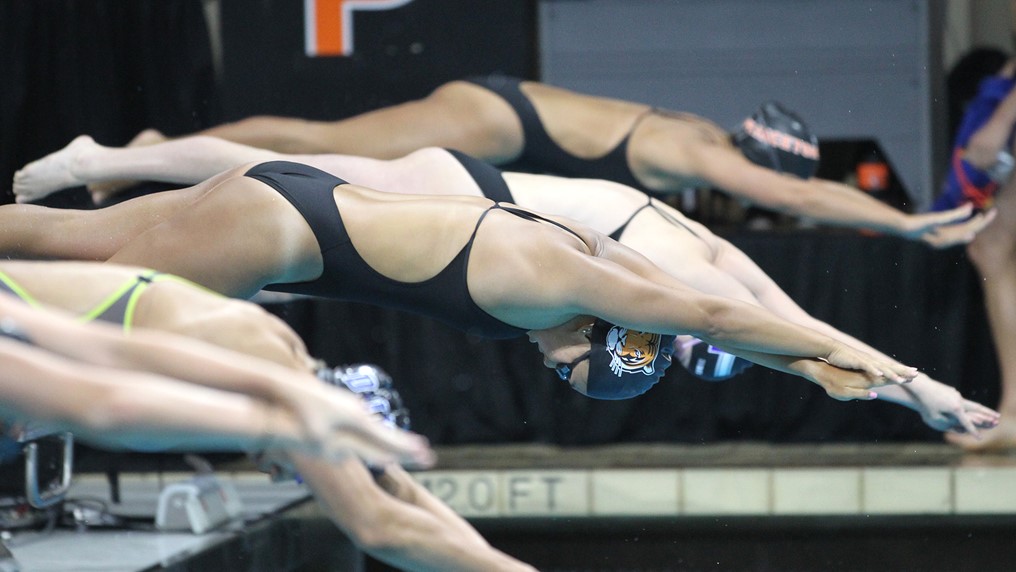 With 12 swimmers and divers qualified for A finals and 2 for C finals, Princeton is making a move on the Harvard Crimson on Day 2 of 2020 Women's Ivy Champs. Stock photo via Princeton Athletics

Princeton had a strong morning on Day 2 of the 2020 Women’s Ivy League Championships, managing to make 10 A finals and 1 C final out of 11 splashes. Princeton began the morning with its only four entrants in the 500 free all making the A final. They were freshmen Ellie Marquardt (1st with 4:42.74), Addison Smith (6th), and Eliza Boeckman (8th) and junior Courtney Tseng (3rd). In the 200 IM, senior Christie Chong (10th in last year’s final with 2:00.31) was the top qualifier with 1:58.95. Junior Regan Barney (5th) and freshman Jennifer Secrest (7th) also made the A final while senior Janet Zhao made the C final in 17th. Again, in the 50 free, Princeton placed all its swimmers in the A final: freshmen Amelia Liu (1st with 22.46), Nikki Venema (4th) and Sarah Grinalds (8th). The Tigers also landed two divers in the A final: Sine Scribbick (290.70) and Mimi Lin. Katrin Lewis, who had been in the top 8 until a disastrous 5th dive that scored only 1.2 points, dropped to finish 20th overall.

Harvard, who holds a 16-point lead over Princeton, bet heavily on diving on Day 2. The Crimson were the only team to field six divers; everyone else had three. Harvard finished with 3 divers in the A final (Morgane Herculano at 2nd, Elizabeth Miclau 5th, and Evelyn Geier 8th) and 3 in the B final (Esther Lawrence 9th, Megan Galbreath 12th, and Georgina Milne 14th) for a projected 123 points. In swimming, defending champion Miki Dahlke was the lone Crimson in the A final of the 500 free, qualifying 2nd out of morning heats. Freshman Felicia Pasadyn and sophomore Samantha Shelton, the defending champion, qualified 2nd and 4th for the 200 IM final. Senior Mei Lynn Colby and junior Kennidy Quist made the A final of the 50 free in the 3rd and 6th positions, respectively.

Yale, whose team win in 2017 was the first non-Princeton/Harvard Ivy title since 1999, placed 5 in A finals, 3 in B finals, and 5 in C finals but had three swimmers miss qualifying for finals altogether. The Bulldogs’ sophomore Ashley Loomis qualified 7th in the 500; senior Lili Margitai was 8th in the 200 IM; sophomore Isabelle Henig and freshman Ophelia Pilkinton made it back 5th and 6th in the 50 free; and diver Nikki Waters qualified 3rd on the 1-meter board.

why do you think that Harvard is even going to come close to Princeton?

Harvard and Princeton are playing different strategies and both are legit… diving plays a huuuuge role at this meet and Harvard has double the divers of Princeton (and they’re all really good). I think the final score will be closer than either team is expecting