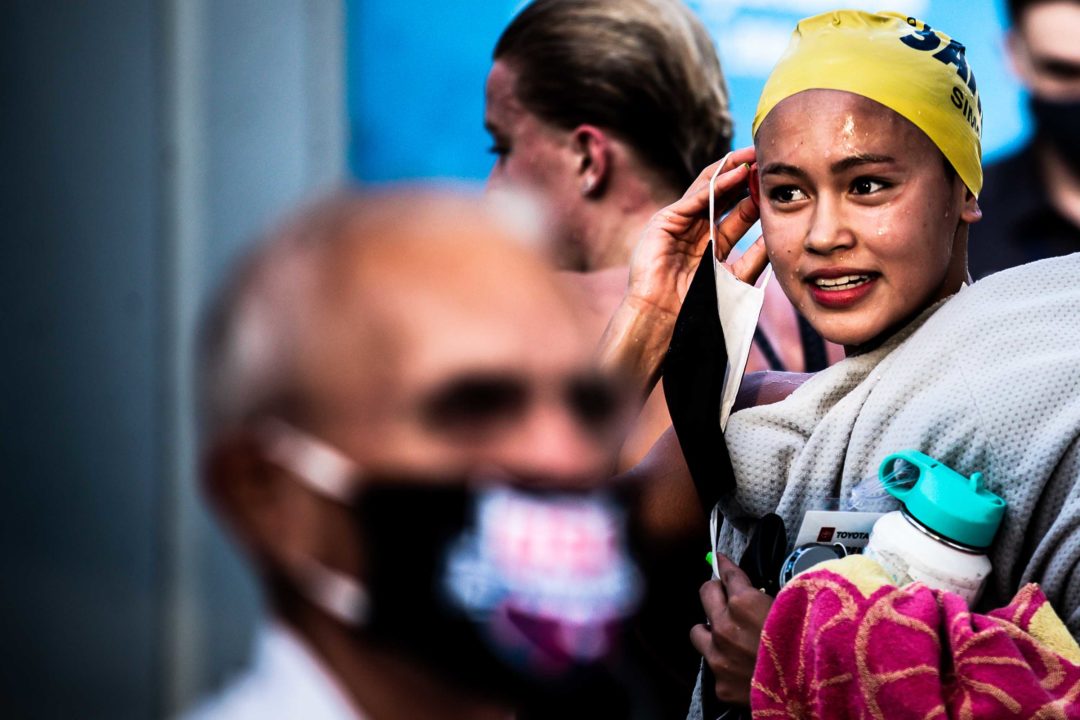 After each session of the 2020 U.S. Open, we'll try to make a little sense of the craziness that ensues when one meet happens across nine different locations. Archive photo via Jack Spitser/Spitser Photography

After each session of the 2020 U.S. Open, we’ll try to make a little sense of the craziness that ensues when what is technically one meet is happening across nine different locations, spanning multiple time zones. This will come in addition to the daily consolidated results, and we’ll try to provide a digest version of the some of the big storylines from each session, and put some of the bigger swims into context.

With only a single event tonight, the 800 free, there isn’t as much to highlight as there is likely to be over the next two days, but here’s just a couple things we noticed.

The Sandpipers of Nevada had a big night, locking down three of the top eight combined spots in the women’s 800 free. They were led by Bella Sims, who moved to #5 all-time in the 15-16 age group with her time of 8:27.01. Erica Sullivan, who recently announced she intends to start her collegiate career at Texas, took 3rd overall with her time of 8:31.38, while Paige Kuwata finished 8th overall with a 8:45.15.

While most of the swimmers in this event tended to be teenagers, two of the top eight finishers are veteran distance swimmers. Ally McHugh, who swam for Penn State but now trains at Wisconsin, took 2nd overall in 8:29.36, while 31 year-old Ashley Twichell finished 4th overall with her 8:33.58.

UVA commit Caroline Pennington, who like Twichell swims for the TAC Titans, hit her first OT cut with her 8:44.45 in Greensboro, finishing 7th overall.

On the men’s side, most of the big swims came either at the Indianapolis or Sarasota locations. In Indy, Egyptian national Marwan El Kamash hit a lifetime best mark of 7:52.19, just three seconds off of the Egyptian national record. That time appears to be the fastest in the world since Italy’s National Championships in August, and the 8th-fastest time overall this calendar year.

In Sarasota, distance ace Bobby Finke, a junior at Florida, went 7:53.05, the only man beside El Kamash to get under 8:00 at any of the nine meet locations. It was a duel for 2nd behind Finke, as fellow Gators Kieran Smith and Alfonso Mestre battled it out, with Smith touching first, 8:00.05 to 8:00.49. Further north in Richmond, Mestre’s brother Alberto swam a 22.50 in a 50 free time trial, just 0.12s off of his lifetime best and just 0.10s away from his time from last summer’s Pan Am Games.

The 800 had a distinctly international flavor on the men’s side, as Italian Fabio Dalu put up the fastest time at the Des Moines location. While that wasn’t quite fast enough to crack the overall top 8, it the first time under 8:10 for Dalu, who won the 1000 free at the 2020 NCAA Division II championships as a freshman for McKendree University.