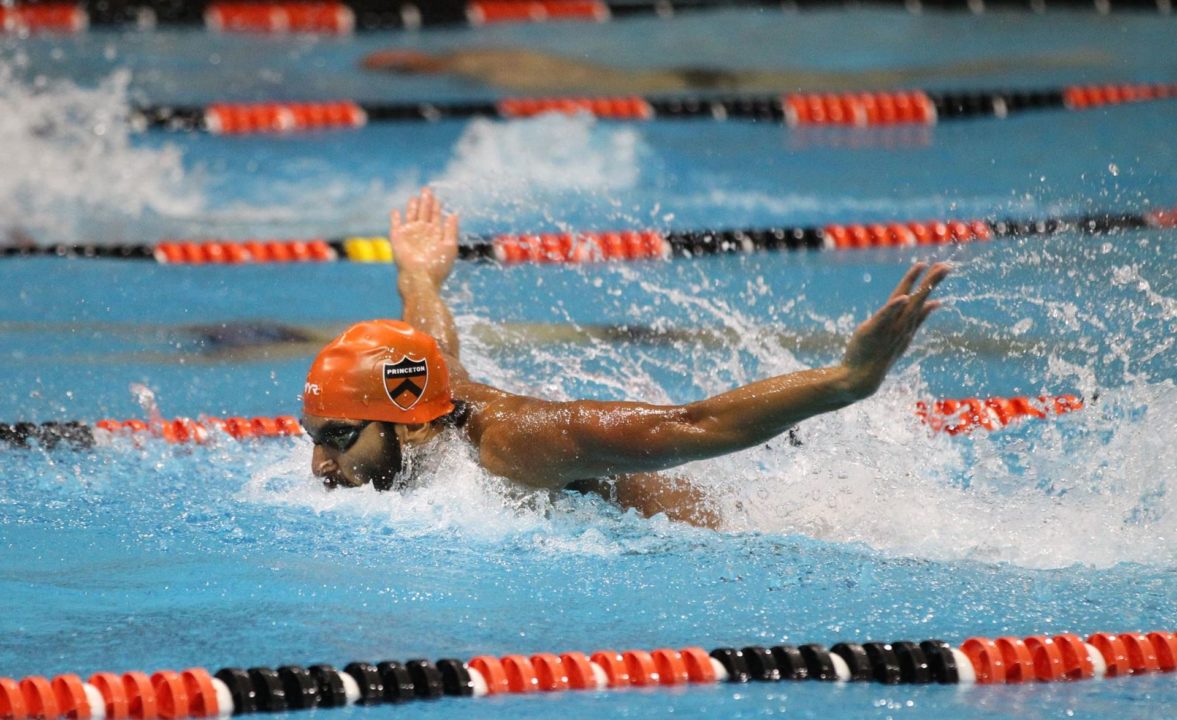 The Harvard men are the 3-time defending champions, but Princeton and Yale will challenge to end their streak at the 2020 Ivy League Championships.  Archive photo via Beverly Schaefer

The Harvard men are the 3-time defending champions of the Ivy League, but Princeton and Yale will challenge to end their streak at the 2020 Ivy League Championships. The Tigers’ depth in the distance freestyles will certainly factor in and Raunak Khosla returns after winning 2 events in record time as a freshman. Harvard is without star NCAA Champion Dean Farris, as he’s taking a redshirt this season, but freshman Gunner Grant has already risen to the top of the league in the backstrokes for the Crimson.

50 FREE: Harvard’s champion Raphael Marcoux is taking a redshirt this season, but Brown’s Cody Cline, and Yale’s Henry Gaissert are returning medalists. Harvard still leads the Ivy League this season with Umit Gures. Columbia’s Albert Gwo has hit his best this season and is in position to challenge for the title. Both Gures and Gwo have season bests that would have placed 2nd last season. Another Columbia sprinter, Jonas Kistorp, took 4th ahead of Gwo last season. Yale newcomer Joseph Page and teammate Phillippe Marcoux, Raphael’s younger brother, have an outside shot to win it.

200 BREAST: 2019 medalists Boris Yang (Penn) and Daniel Chang (Harvard) are the top returners in this one, but we could also see an influx of new talent from other events. Princeton’s Raunak Khosla has the conference’s fastest time this year at 1:56.00 from the HYP meet. That’s better than Yang (1:56.33) or Chang (1:56.34) were last year at Ivies. However, Khosla swam (and won) the 200 fly last year, and he’d likely have to give up that event to swim the 200 breast. Columbia’s Nianguo Liu is second in conference ranks at 1:57.19, but has an event conflict of his own after taking 7th in the 100 free last year. Of the six swimmers ahead of him there, two graduated and two more took redshirt seasons. We’ve seen several swimmers bunched into the 1:57-range this year, including Yang and Chang. This could be a big scoring event for Harvard as Charles Vaughan is ranked #2 this season. Princeton’s Daniel Arris has also been 1:57-mid. Yale returns 2 finalists within striking range: Calvin Yang and Sam Pekarek.

100 FREE: We’ll see many of the same players from the 50 free racing for the 100 free title, led by Gwo and Gaissert who have been 43-low this season. Gaissert was the 2019 runner-up behind Farris. Page and Cline have been 43-mid this season, while Marcoux, Brown’s Alex Smilenov, and Harvard’s Mahlon Reihman have also been in the 43-range. Liu was a finalist here last season but will likely choose between the 100 free and the 200 breast.

200 FREE: This is another event without defending champion Farris, and that blows the title race wide open. Liu is the top returner as last season’s bronze medalist. Other returning finalists include  Gaissert, Reihman, Brown’s Michael Lincoln and Harvard’s Corbin Rawls. Cornell freshman Paige Dacosta leads the league, followed by Lincoln as the only men under 1:36 this season. However, Gaissert and Reihman were also 1:35 in last season’s final. Cline and Page hold yet another top-8 ranking here.

Princeton is projected to take the meet by 15 points over Harvard, with Yale a little over 150 points back in 3rd. We have to take some things into consideration when looking at the Swimulator rankings, which are based on the fastest times posted this season ahead of the meet and do not include diving.

The Harvard men prevailed for the 3rd-straight year in their meet against Princeton and Yale, but diving could make a huge difference at the conference meet. Based on the fact that Harvard returns the most points in the diving events (just 12 points more than the Tigers), this team battle really could go either way, but the Crimson will have a fight on their hands to win this one without Farris, Marcoux, and distance champion Brennan Novak, who graduated after last season.

Having graduated several of their top guys from 2019, including champion Mark Andrew, Penn has big shoes to fill as they look to repeat on their top-3 finish. However, a few of their swimmers don’t seem to have shown their cards yet this season and should improve greatly from their Swimulator projections. For example, the 2019 500 free and mile runner-up Will Thomas and finalist Will Kamps are not projected to score in their top races. Those two alone could account for more than 100 points. Yale’s depth in the sprint freestyles could go a long way as they fight to move into the top 3, but Columbia is also in the running for that spot.

I’ll see if I can track that down. I haven’t seen it on the meet site yet. In any case, I’ll be sure to post the heat sheets as they become available 🙂

“…so to satisfy their yen…”
Go Tigers.

Princeton also has a special coach in Crispino. Guy knows how to recruit and create the right culture for Champs.

Harvard’s going to win by a million