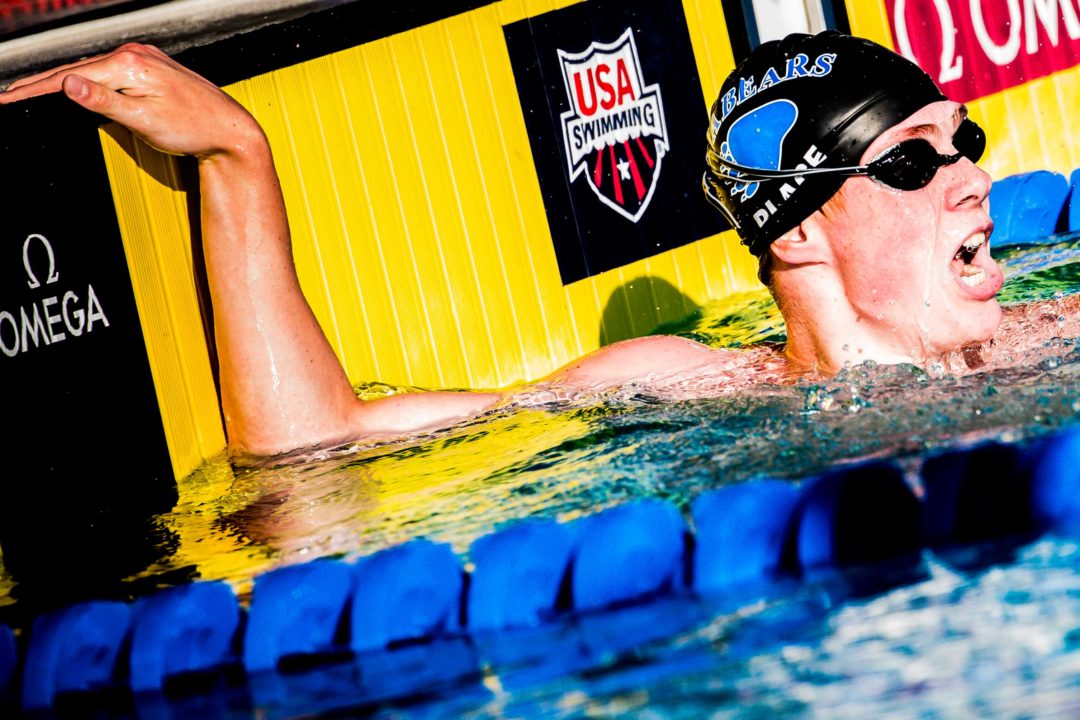 James Plage from AquaBears in Connecticut dominated the 1500 freestyle timed final on Tuesday night, putting in a performance that nearly earned him a meet record. It was the fastest 1500 free by a 16-year-old in the last three years and the ninth-fastest in U.S. history for the 15-16 age group. Since verbally committing to NC State for 2020-21, Plage has destroyed his personal best in this event. Coming into long-course season his best time was 15:54.20. Two weeks ago he clocked a 15:26.64 at the Connecticut Senior State Championships, and he’s now lowered his PB to 15:16.97 for a 37.2-second improvement year-over-year.

Liam Bell of US-Aquatics Club in Georgia claimed the junior national title in the 100 breast with 1:01.19, the ninth-fastest time ever for 17-18 boys in the U.S. The Alabama verbal commit is a multiple-time Georgia state champion, both in high school and in club swimming, but this is his first national title. Bell came into the meet seeded third with 1:02.23. He turned in a stellar performance in finals, swimming the fastest front half and the fastest back half and winning by nearly a second over last year’s fifth-place finisher, Ben Dillard.

Brea Aquatics’ Justina Kozan was the only back-to-back event winner on Night One of U.S. Junior Nationals. The 15-year-old repeated her 2018 junior national title in the 200 fly, going 2:09.68 for a lifetime best by .88. Kozan won the event last summer with 2:10.83 and had a seed time of 2:10.50 coming into this year’s meet. She is now tied for 9th all-time among U.S. girls in the 15-16 age group and she still has another year to improve her standing.

Lydia Jacoby is the most exciting talent to come out of the state of Alaska in recent years and as of Tuesday she had graduated from regional record-breaker to junior national champion. Jacoby, who swims for Seward Tsunami Swim Club, won the girls’ 100 breast at Juniors with 1:08.12, moving up to tie for sixth all-time in the 15-16 age group. She earned her first 2020 Olympic Trials cut in the event at 2018 Winter Nationals with 1:10.45 then cracked the 1:09 barrier for the first time at U.S. Nationals last week. Still 15, she has a year left in the age group to chase Megan Jendrick’s National Age Group record of 1:07.05. In short-course yards, Jacoby dropped 3.2 seconds this season and finished with 1:00.42.

With the top four finishers all under the 2:00 barrier, the 2019 final of the boys’ 200 fly was a good second faster than its 2018 counterpart. Mason Laur of T2 Aquatics pulled off something of an upset, coming from a two-week-old PB of 2:04.35 which ranked him 30th on the psych sheet, to winning the junior national title in 1:59.25. Laur dropped 3.7 seconds in the morning to qualify first for finals with 2:00.69, then held off the challengers to earn the gold medal with another 1.4-second improvement at night. The performance catapulted him to #13 all-time in the 15-16 age group.