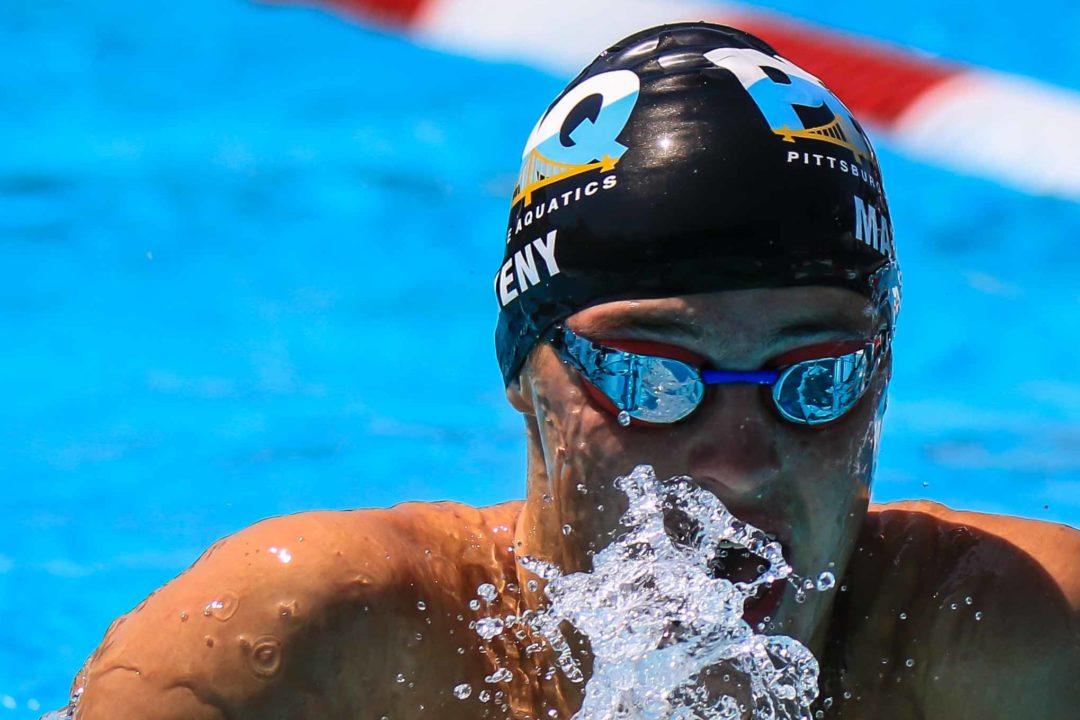 Torri Huske and Josh Matheny are the 2019 Swammy winners for 15-16 Age Group Swimmers of the Year. Current photo via Jack Spitser/Spitser Photography

She wrapped up 2019 at U.S. Open where she upset World Record-holder Regan Smith and World Championships medalist Olivia Smoliga by touching 1st in a time of 58.63, breaking the 59 second barrier for the first time.

Matheny, who had made a name for himself last December at Winter Juniors East with wins in the 100/200 breaststroke events, exploded into one of the best 18-and-under breaststrokers in the world in 2019.

Hayes stood out in an age group that was brimming with talent in 2019. He opened the year by winning the 50 free (20.09) and 100 back (47.28) at the Oklahoma High School Boys’ 6A State Championships. The Norman North High School sophomore set State Records in both the free and the back; the latter had belonged to David Plummer who went on to represent the U.S. at the 2016 Olympic Games. Hayes also led off the 200 medley relay in 21.36 and split 44.64 to anchor the Norman North 400 free relay at the state meet.

I think Charlotte Hook merited an honorable mention. Particularly since there were 4 HMs for the boys which is perplexing given the incredibly high standard of age group quality for the girls. She went 2:07 in the LC 200 fly at Summer Nationals. The closest 15 or under in this event recently (that I’m aware of) is the Australian Dekkers who got a lot of notice recently when she went 2:08.

Damn. Passed up again. C’mon SwimSwam give me my respect!

We have more than three women who could make the Olympic final, that’s for sure.

Low. This rarely happens anymore. For this to be true, essentially the 3rd place finisher at Worlds would have to be faster than the defending World Champion Kylie Masse. Kylie Masse is really, really good.

agreed 100% _ huge potential for Kozan & a few other juniors . Usa swimming is in good hands for the near future .

Amazing talents here. Especially on the women’s side. If they are not eaten by the pressure at trials these girls can make the team for Tokyo.
Torri Huske is the next US female star in the 100 fly.
Phoebe Bacon is coming and is full of confidence after her huge race in Atlanta.
Gretchen Walsh was dominant at World Juniors and has an unlimited potential in the 50 free/100 free.

Huske and Walsh certainly look on course to qualify for olympics. Don’t know about Bacon yet as there are far too many great backstrokers in the USA to conclusively say who will qualify for the olympics.