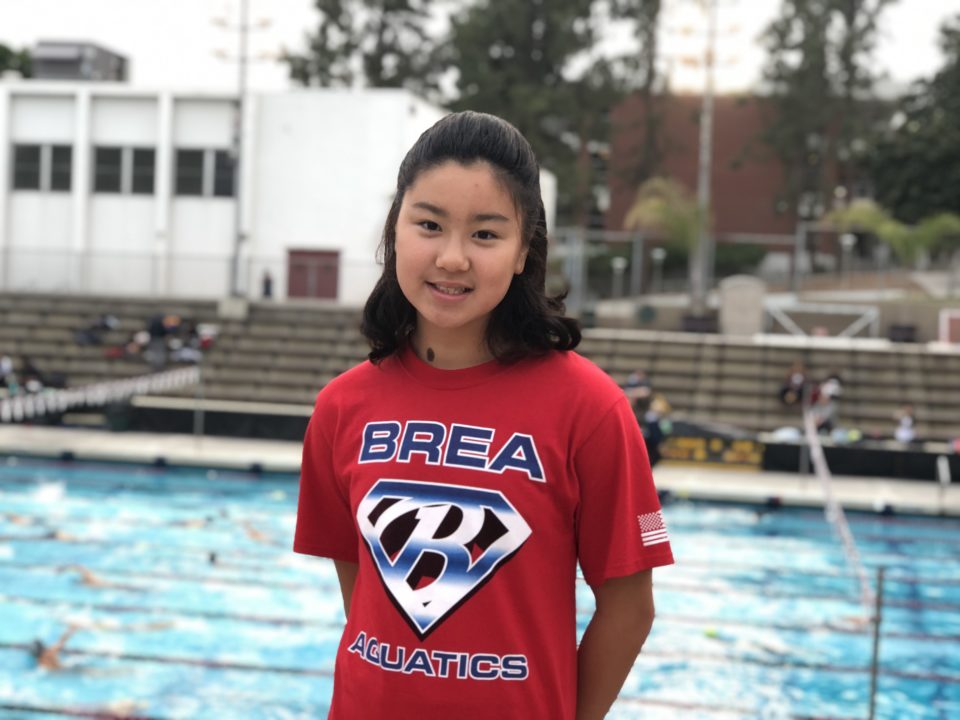 Kayla Han and Joey Campagnola are our 10-and-Under Age Group Swimmers of the Year for 2019.

Raquel Maldonado – Chicago Wolfpack Aquatic Club (Chicago, IL): Maldonado aged up before the summer but she still finished the year with 14 top-ten performances for 10-and-under girls. She was the 2nd-ranked 10-year-old for the 2018-19 SCY season in IMX scores.

For the sake of what this comment section has the potential to become, please reconsider 10-Under Swimmers of the Year for 2020…USA Swimming purposefully does not publish Top-10 rankings for 10-Under.

I am not trying to take away from the accomplishments of these hard working young athletes. My concern is in the future expectations and pressure to be the 11-12 Swimmer of the Year, then 13-14…Yes, the developmental model for athletes has improved and we are seeing programs guide swimmers from youth (10-Under) through senior level success, but is that the majority or the minority of Top 10 10-under athletes? (Actually a potential fun research project for Swimswam, rankings of top 10 10-Under athletes at 10 then again at… Read more »

So your solution to save these kids from this ruining their lives is to turn the comments section into some massive debate about whether or not their futures are now ruined?

Sounds like someone just trying to cause problems, or prove how morally progressive they are.

Yeah, I agree. I had a feeling someone was going to say something like this. Really mixed results from the former honorees, some are still very good but some aren’t that good anymore. We don’t have any way of knowing if that affects them or not, but I do think that it makes sense how other countries don’t keep track of age group records until they’re 14 or something. Every time 10&U’s or 11-12’s are mentioned I think we get these kind of comments, so I know that plenty of commenters don’t think it’s a very good idea.

Dealing with successes and failures is a big part of what youth sport is about. You cannot protect children from this no matter what you do. It is clear to all in every activity and at every age who is the best at the particular time. Let them enjoy it and then support them when their own individual challenges arrive.

Someone has to say something every time a 10 year old gets mentioned on here. A young swimmer could possibly burn out but a small article on a swim site isn’t going to be the cause of it.

Let the girl enjoy her accomplishment

At least your country is looking at young talent coming through. Australia doesn’t even look at kids until they are 14.

Congrats to all the kids mentioned! They are probably physically gifted but to me what sets them apart is the hard work and dedication they show to their craft day in and day out. I feel it’s great to recognize achievement through hard work. Let’s not all panic and assume this sets them up for disappointment and burn out. Like with a lot of things kid related, it is up to the parents and coach to teach them to enjoy these accolades without going overboard with thoughts that this predestines them to greatness. It is a cool acknowledgment for sure, let’s not take that away from the kids. Should motivate all to work hard.

Most of the boys very fast at an early age are physically gifted. And it’s hard for them to keep developing so many stall 3 or 4 years later while other boys start their progression.
It’s less the case with girls and we’ll see more girls fast at 10 still perform very well and even become stars as adults.

Congrats to Kayla and Joey.

How do you get dats and ranking information of all the swimmers by age group?