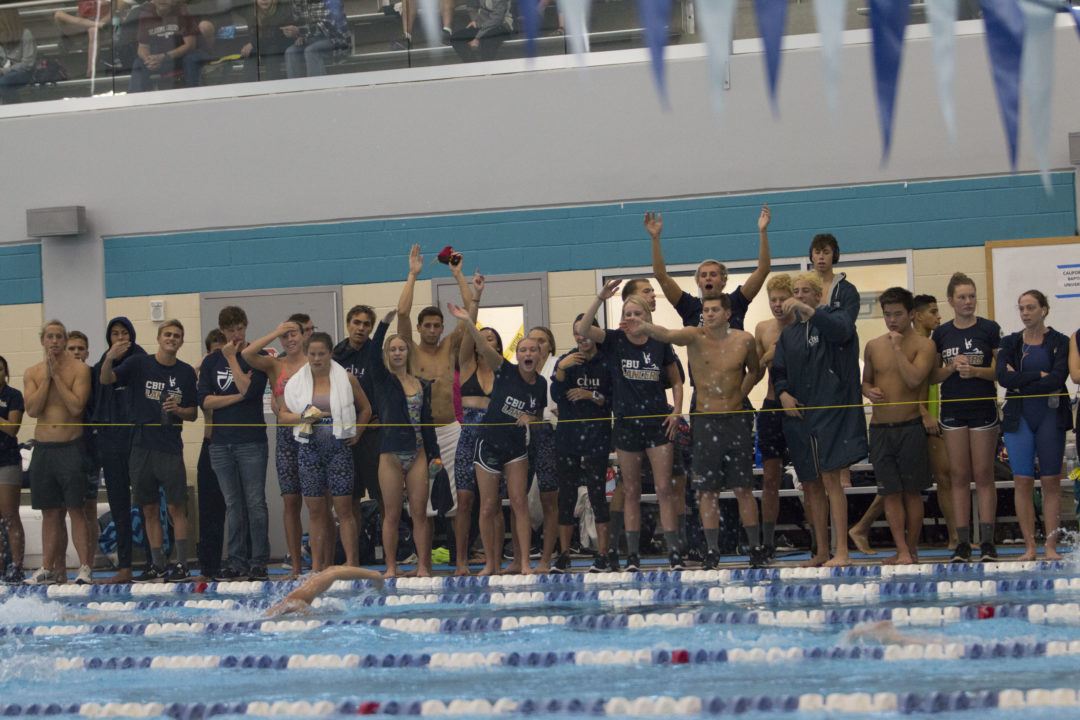 Queens wrapped up another strong morning at the 2018 NCAA Division II Championships and is poised to win their fourth consecutive team title. Archive photo via CBU Athletics/Robert Jordan

The final prelims session is in the books at 2018 NCAA Division II Championships. Queens and Drury led the morning with 8 and 4 finalists, respectively.

Queens went out on a high note on the last morning of heats, placing 6 swimmers in A finals and 1 in a B final. There is still a tight battle going on for second place in the team standings. Cal Baptist, sitting up by 17 points over Indy in our projections, had a strong showing this morning, going 3 up and 1 down with its 400 free relay in the championship final. Indy didn’t give anything away, though; the Greyhounds put 3 up, 2 down.

The biggest point winners of the morning were Fresno Pacific, who added 34 over their seedings with strong performances in the 100 free and 400 free relay. Florida Southern also gained 34 thanks to their 200 backstroke and relay results. Missouri S&T’s relay put the Miners 20 points ahead. Saint Leo, Wayne State, and Cal Baptist also did better than expected.

Note: does not include the 1650 freestyle.

Anne, we are proud parents of our child / swimmer in the D2 meet
Each evening following the finals session, we would head to our hotel room and I would look for and read your report.
Thanks so much for the coverage.
It was a tremendous help for we parents to process the ups and downs, the records, the team points, the live results.
Thanks again, you do good work.