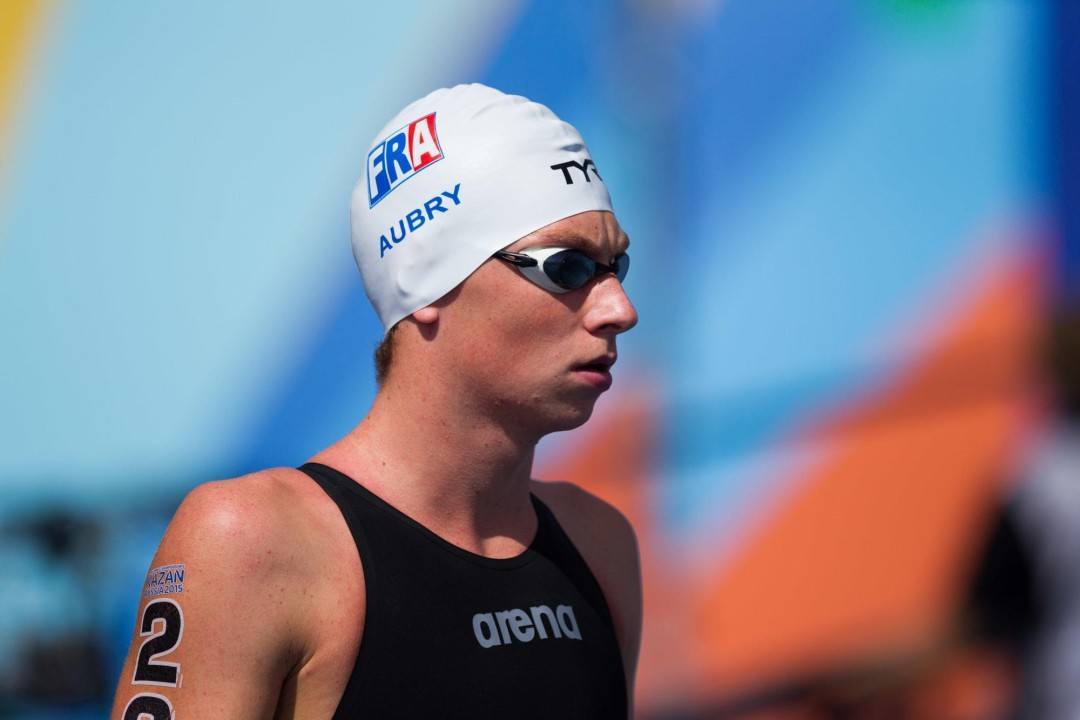 French distance swimmer David Aubry broke the meet record in the 800 free and moved up to 5th in the world for the season with 7:50.09. Archive photo via Tim Binning/TheSwimPictures.com

The 56th Geneva Challenge wrapped up from Centre Sportif des Vernets yesterday with Roman Mityukov topping the podium once again.

How Did Hungarian Olympian Hubert Kos Fare in His First SCY Races for Arizona State?

During his NCAA debut this weekend, Hubert Kos offered Arizona State a glimpse of the scoring potential the 19-year-old Hungarian could bring to NCAAs.

Italy’s Gabriele Detti was back in the water on day two of the 2023 Geneva Challenge, taking on the two events of the men’s 400m free and 1500m free.

As a reminder, the FFN’s criteria for making the French squad for European Championships were: The four fastest swimmers who achieve, in prelims, the qualifying times in Table 1 below AND who place among the top four eligible (French) swimmers in the final of that event, will be selected to represent France in Glasgow.

Russia’s Anna Egorova, who trains in Montpellier, took a cool 4 seconds off her seed time to win the 400 free in 4:08.18. She knocked Montpellier teammate Sharon van Rouwendaal (NED) out of the championship final (only one foreign athlete is allowed in each A final, except in the 100 free and 200 free finals where none are allowed) by qualifying ahead of her in prelims, 4:12.80 to 4:12.89.

The French national title went to Fantine Lesaffre, her fifth of the meet. Lesaffre would have needed to drop 2 seconds from her seed time of 4:12.40 to have qualified for Glasgow; she went 4:20.89 in prelims. The fastest French swimmer in the morning was Margaux Fabre with 4:19.95.

David Aubry added the 800 free to his slate of events for the European Championships, taking down the meet record in the process with 7:50.09 in Sunday’s final. Aubry had swum a 7:57.09 in prelims on Saturday, just sneaking in under the qualifying standard with a personal best by .58. He destroyed that PB by 7 full seconds in the final, and catapulted himself into the world’s top-5 for the season.

Another Egorova with a big drop was Valériya Egorova, who clocked a 2:13.12 to erase 1.35 seconds from previous her personal best and win the women’s 200 back by nearly a full second over Mathilde Cini. Cini, who was runner-up in this event last year, earned the title of French national champion. Cyrielle Duhamel finished third in 2:14.60, just ahead of 15-year-old backstroke sensation Louise Lefebvre. Lefebvre lowered her own NAG record from 2:15.34 to 2:14.74.

Coming very close to qualifying for Glasgow with 2:13.26 and 2:13.50 in prelims were defending champion Camille Gheorghiu and Cini, respectively.

Mehdy Metella, defending champion and French record-holder in this event, cruised to an easy win in the men’s 100 fly on Sunday with 51.92 in the final. He had met the qualifying time for Glasgow in prelims with 51.69. Pierre Henry Arrenous punched his ticket to Euros with a stunning 52.63 in prelims, taking 1.26 off his seed time. In finals he went another .02 faster to claim the silver medal. Nans Roch notched a new PB of 53.26 with his third-place finish.

French record-holder Mélanie Henique successfully defended her title in the 50 fly, coming within .08 of her national record with a winning 25.71. Marie Wattel and Charlotte Bonnet finished second and third, nearly half a body length behind Henique. Both Wattel and Bonnet went best times but neither qualified for Glasgow in the event.

Naële Portecop of Amiens took a big chunk out of Wattel’s National Age Group Record for 15-year-old girls. She finished fifth overall with 26.94. Wattel had held the record since 2012 with 27.25.

Yonel Govindin scored his first ticket to European Championships as well as a national title in the 50 free with a narrow win over Maxime Grousset, 22.13 to 22.14. Grousset, the silver medalist at 2017 FINA Junior World Championships, led the morning heats with a Glasgow-qualifying time of 22.15, a PB by .10. Govindin made it through too with 22.33, his best by .05. Govindin said in the post-race press conference that he “made some adjustments” that “paid off” in the final. Indeed, he dropped another .20 and got the win in a strong field of sprinters.

There were no qualifiers for European Championships in the final event of the meet, the women’s 50 breast. Fanny Deberghes swam the only sub-32s in the field in both prelims (31.79) and finals (31.66) but neither met the time standard for the event. Deberghes would have had to go a personal best in prelims by .32 in order to punch her ticket to Glasgow. Defending champion Solène Gallego was runner-up this year in 32.13.

Amazing meet for David Aubry the open water swimmer. Philippe Lucas’ magic again.
He won the 400 free in 3.48, the 800 free in 7.50 on the last day of the meet and the 1500 free in 15.01.
We are lucky in France to have coaches like Philippe Lucas and Fabrice Pellerin. 2 genius of freestyle coaching with very different methods. But it’s working for both.

Overall a much better week than expected.
Of course always many events in big trouble but at least we have seen a new generation coming.
Metella and Bonnet are the 2 big leaders but behind, and especially on the women’s side, there’s more depth.
With Bonnet, Wattel, Deberghes, Fabre,… Read more »