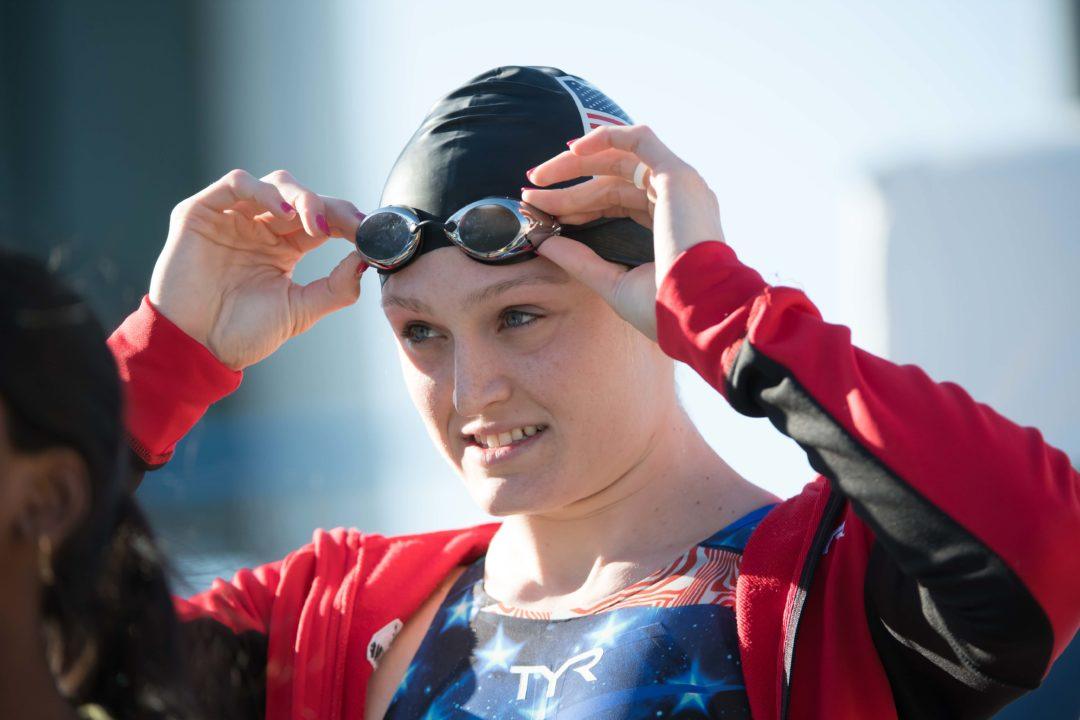 Kelsi Worrell is the clear favorite for gold in Indianapolis, but a great battle is brewing for that second spot. Archive photo via Mike Lewis/Ola Vista Photography

After 2012 Olympic champ Dana Vollmer took a break from the sport after the 2013 World Championships to have a baby, the landscape of the women’s 100 fly in America lacked a true star. Kendyl Stewart did have an impressive showing at the 2014 Pan Pacs winning bronze, but no finalists at the 2015 Worlds wasn’t a good sign.

Despite the disappointment of both Stewart (10th) and Claire Donahue (20th) failing to final in Kazan, the next American star had just emerged a few weeks earlier.

Kelsi Worrell had exploded at the NCAA Championships in March, dropping over a second from the year prior for a new American Record and the national title. She also stormed to the 200 fly title, but had yet to prove herself in long course.

After improving her PB down to 58.24 at the Mesa Pro Series in April, Worrell exploded at the Pan Am Games in Toronto, posting a blistering 57.24 in the prelims. She would go onto win the final in 57.78, and her prelim time would stand up as the 3rd fastest of the year.

She went onto have a terrific performance at the Olympic Trials last year in Omaha, winning the event in a best of 56.48. Despite a slip up in Rio that saw her on the outside looking in for the final in 9th, there’s no doubt she’s a top threat on the world stage in this event.

She has continued to swim well this season, dominating the Arena Pro Series and sitting as the fastest American by eight tenths of a second. Worrell is the clear favorite in this race, and probably could be over a second slower than she was in Omaha and still qualify. However, behind her, there is a massive fight for that number two spot.

Behind Worrell’s season best of 57.4, there are four other Americans who have been under 59 seconds. On top of that, there are five others who will be competing in Indianapolis that were under 59 last year.

Leading the way is Amanda Kendall of Canyons Aquatic Club, who has posted multiple 58s this year including a 58.27 at the end of April which makes her the 2nd fastest American this season. Kendall, now 26, has come back from a disappointing 27th place finish in the event in Omaha, and has to be considered one of the favorites to earn the second spot.

Three others have cracked 59 seconds this year: Kendyl Stewart, Hellen Moffitt and Sarah Gibson. All three were finalists in Omaha, and figure to be major challengers for that second spot as well.

Stewart finished 3rd behind Worrell and Vollmer at Trials, and has been as fast as 57.82 back in 2014. Seeing that her 58.32 from March is only a tenth slower than she was last summer, we could easily see her dip back under 58 in Indianapolis.

Moffitt is a similar position, posting a season best (58.59) just over a tenth shy of her Olympic Trials showing (58.46). Gibson is right there as well, sitting 5th among Americans this year at 58.9 and is the 2nd fastest from last year among those in contention. However, it’s worth noting both Moffitt and Gibson delivered their bests in the semis, not the final, in Omaha.

200 fly specialists Cassidy Bayer, Katie McLaughlin and Hali Flickinger also figure to be in the mix in this race. Bayer is a major contender after a best of 58.11 last summer, while McLaughlin has been rounding into form nicely and was nearly on her 2016 Trials form earlier this month in Santa Clara, clocking 59.17. Flickinger was a finalist in Omaha, and could easily be there again, but probably doesn’t have the speed to challenge for a top-2 finish.

With the 200 fly on day 1, whoever qualifies in that will have the pressure off in the 100 and could surprise. These three, along with Worrell, are the frontrunners in that event.

Two others under 59 last summer – Eva Merrell and Claire Donahue – will push for a finals berth as well.

Merrell, who will also be a major factor in the 200 back, just missed the final in Omaha but came back with a pair of 58.7s in August at the US Open and Junior Pan Pacs. She’s a rising high school senior and one of the top high school talents in the nation at the moment. The London Olympian Donahue has yet to break a minute this year, but was still 6th in Omaha and has been as low as 57.4 back in 2012.

Darkhorse: Veronica Burchill was the 2014 US Junior champ, but had struggled to hold onto that form since, including failing to break a minute last summer. Now after posting her fastest swim since 2014 at the Atlanta Pro Swim (59.40), she immediately enters the running for a finals berth in Indy.

Scuffle for silver is the theme of the 100 butterfly.. I think Worrell wins this in 57.1. She’s in the thick of it come Budapest but I see Oleksiak and Ikee taking the medals behind Sjostrom. I think we could be seeing a winning margin of 1.2 seconds in this event if Sjostrom is in touching distance of her WR.

Kendyl S was third in Omaha 2016, not disappointing 27th

The article says she was 3rd. Amanda Kendall was 27th.

A weak event in USA.
Kelsi Worrell and the rest of the country.
I’d like to see a young US talent for Tokyo 2020 but I don’t see who right now.

I’m excited to see what Olivia Bray can do.

Kelsi would have finaled at the Olympics if not for Chen Xinyi. She is the Chinese swimmer who had a positive drug test at the games. She finished 4th but has been banned for 2 years.

So instead of being #9 she would be #8. Not much of a difference to me. On the other hand if being an Olympian is considered a legacy then being an Olympic Finalist deserves even more respect.

No, she could’ve went faster in the final..

exactly, if the cheater had been caught beforehand, Worrell would have had a shot at the big race (where her PB would have won bronze, not that there’s any guarantee she wouldve repeated it)

Would, could, should… She HAD her chance in semi-final to do whatever you said.
With that it doesn’t mean that I disagree with you that cheating isn’t a victimless crime.

Scuffle For Silver could work as a rock band name 🙂

11
-1
Reply
Frequentflyer
Reply to  He Gets It Done Again

Funny, I thought it was scuffle for silver because Amanda Kendall had some scuffles in the past.