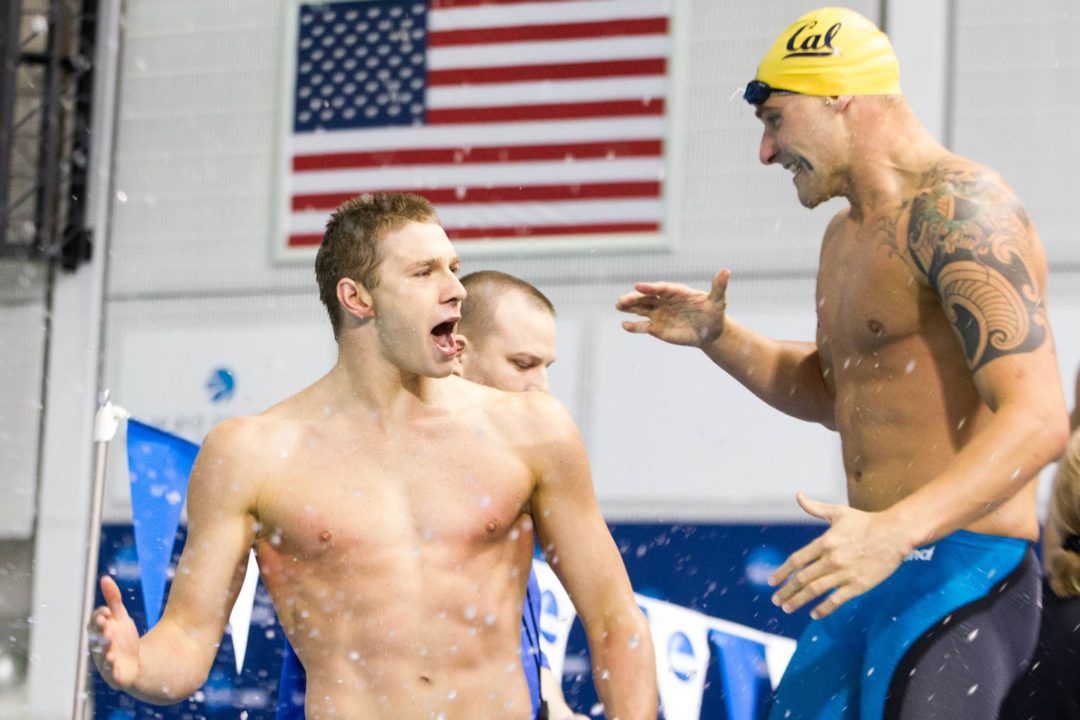 Ryan Murphy will look to lead Cal back to the top of the podium in the 200 medley relay. Archive photo via Tim Binning/TheSwimPictures.com

After being denied their third straight title last year due to a blazing 18.00 anchor from Alabama’s Kristian Gkolomeev, the Cal Golden Bears find themselves as the pre-race favorites once again in the 200 medley relay.

Their nation leading time of 1:22.31 from Pac-12s sits over eight tenths ahead of the rest of the field coming into the meet. Their recent success in this event starts with Ryan Murphy, who is undoubtedly the worlds best backstroker currently. He’ll give the team an advantage on the opening leg, and their other legs are looking elite this year as well. Both Connor Hoppe (23.13) and Justin Lynch (19.81) were faster at Pac-12s than they were last year at NCAAs, and freshman Pawel Sendyk gives them a sub-19 second anchor after rolling to a 18.59. The scary thing is that the team was just four-one-hundredths shy of the NCAA and U.S. Open Record, all the while Murphy alone has been over half a second faster than he was at Pac-12s.

We must, however, remember that NC State came in as the top seed last year after going 1:23.19 at their conference championship, before failing to even qualify for the A-final. Anything can happen in the 82-84 seconds of mayhem. Another worthy note is that this race is first at Conference Championship meets now, while it falls at the tail-end of night two during NCAAs.

Behind Cal, the Wolfpack do indeed come in as the second seed, after going three-one-hundredths faster than last year in 1:23.16 to win ACCs. Freshman Coleman Stewart was sub-21 leading off, they have a solid breaststroker in Derek Hren and the #2 ranked 50 freestyler in the country in Ryan Held. Butterfly would be the one spot where they’re a bit weaker than other teams, but Soeren Dahl’s 20.40 leg isn’t far off what Simonas Bilis was splitting last year.

Coming in behind Cal at Pac-12s was Arizona, and just behind NC State at ACCs was Louisville, both of whom come in tied for the 3rd seed at 1:23.34. The Cardinals have an experienced team, brining back all four members of last year’s 5th place team that now includes three seniors. Arizona, on the other hand, was expected to final last year but added two full seconds to their conference time and ultimately placed 13th. The three freshman from the team last year are now sophomores, and have acquired some valuable experience. Chatham Dobbs is within reach of cracking 21 on the lead-off, and Blair Bish was a scintillating 23.01 on the breaststroke leg at Pac-12s. Chad Idensohn split under 20 on butterfly, and JP Beach was a solid 19.0 on freestyle. If they execute in the morning, they’ll be right in the thick of things come finals.

Next up in the rankings come Florida and Alabama, who battled it out for the SEC title. Florida is solid all around, but are absolutely lethal on the anchor with Caeleb Dressel producing multiple sub-18 splits at SECs. In that final, Dressel dove in 7th and passed everyone to give Florida the win. If they’re close with 50 left, Florida has a chance. Alabama are the defending champions, but the loss of Gkolomeev is a tough one. Freshman Zane Waddell has done a great job stepping in in his place, splitting 18.5 at SECs, but they have lost their X-factor.

Not to be forgotten in the mayhem is Texas, who placed 3rd last year and won the 400 medley relay. They weren’t really tapered for Big 12s, hence their low seed of 17th, but they’ll definitely be in the mix for the title. John Shebat was sub-21 last year, and Will Licon had the 3rd fastest split in the final last season despite being a 200 swimmer. His switched focus from the 400 IM to the 100 breast should give him a bit of extra speed too. But the real difference-maker is Joseph Schooling, who split 19.3 last year which was miles ahead of everyone else. On free they’ll likely use Brett Ringgold who has been sub-19 multiple times.

Other teams who have cracked 1:24 this year include Indiana, Stanford, Texas A&M and USC. All four teams are solid all the way through, and will be in the fight for an A-final berth. Not to be overlooked either are last year’s A-finalists Tennessee, Georgia and Auburn. Tennessee is especially dangerous with sub-23 breaststroker Peter Stevens. Winning last year’s B-final was Missouri, who could also sneak in the top-8 with a solid lineup that features Fabian Schwingenschlogl, Andrew Sansoucie and Michael Chadwick.

A ton of teams have been mentioned, but that’s just how class and unpredictable this event is. Both Arizona State and Ohio State are also capable of making their way into the A-final.

Y’all should not bet against schooling or any Texas relay.

I’m betting against Schooling to win the 50 free. What’s the wager?

Is Schooling doing a flip turn? But love the enthusiasm.

Especially if it’s Lynch on the relay.

I think it’s very likely that we could see Ryan Murphy dip below the 20 second barrier in backstroke… that may be the most impressive splint unless Dressel splits 17.4 or Schooling goes 18.9 – 19.1

Popov, Cielo, Ervin, Manaudou, deBrugn, Steffen and several others would probably disagree. But I agree, it would be a phenomenal feat. Have to factor in the backstroke wedge as a plus over more remote years.

It will be interesting to see how much the wedge affects the backstroke times moving forward. From personal experience it is night and day for the backstroke start at a pool with high walls such as Georgia Tech

I almost wonder if it would make more sense to put Conger on the fly leg and Schooling on the freestyle. The basis for that argument is that Conger’s fly split may be closer to Schooling’s than Ringgold’s freestyle leg is to Schooling’s.

Conger and Schooling are swimming 3 individual events. Both can only be on 4 relays. By losing a place or two in a relay, they figure the 4-8 points lost will be made up in the 50. Conger will sit this relay out, while Schooling probably will be replaced by Newkirk tomorrow night. Eddie may have a different plan, but this is what I believe will happen.

11
0
Reply
PsychoDad
Reply to  Swimmer A

Rooting for Missouri and Texas!

Dressel has a half second on every anchor leg in the field except maybe Held, but I don’t think Florida will be close enough to Texas or Cal for a win, but top three is definitely in their sights. For Cal the key leg is fly, for Texas it’s probably breast. Cal needs Lynch (or maybe Josa?) to finish even with Schooling because Sendyk and Ringgold/Haas are likely about even. Texas needs Licon to cut as much of the deficit as he can… on a guy that goes 23.1. Licon probably has more raw speed now, but he’s still a 200 swimmer.
If Licon outsplits Hoppe and Shebat goes 20.7 then Texas wins. If Licon and Hoppe are even… Read more »

Good analysis. It’ll be interesting, because I think Licon has been working on his speed since dropping the 400 IM, and Murphy is capable of breaking 18.

Is there another Murphy we’re talking about, or are we expecting Ryan Murphy to break 18 in backstroke? Because that would be awesome!

Think he’s talking of swapping Murphy to free. In that case, he is capable of breaking 18.

I may have exaggerated a little bit…