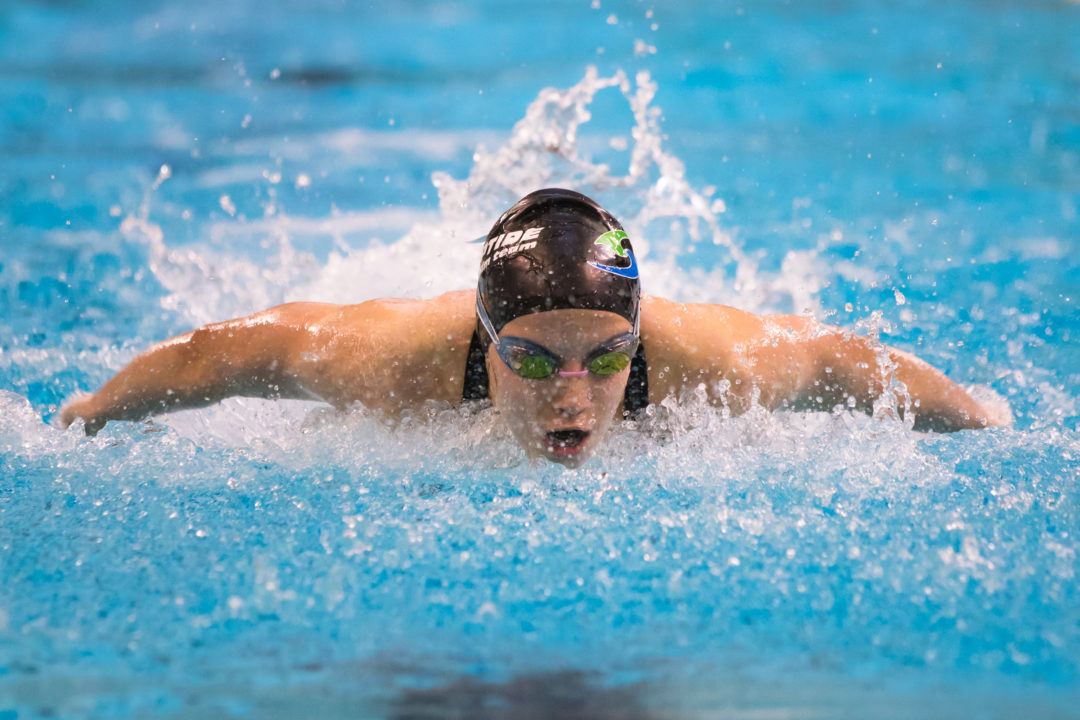 Scottsdale Aquatic Club’s Ryan Hoffer picked up top seed in the men’s 100 free with a 43.42 this morning. His finals swim is highly anticipated, as we wait to see what he has in store after throwing down a 41.23 at this meet last year.

So far, the 2016 West Speedo Junior National Championships have been an amazing showing of skill and speed by America’s upcoming generation of swimming heroes.  Last night Scottsdale’s Ryan Hoffer tied the pool record and became the 7th-fastest performer all-time in the 50 yard freestyle with an amazing 18.71.  Regan Smith of Minnesota’s Riptide Swim Club blew the competition away in the women’s 200 IM, where she barely missed the NAG record but moved into the second position all-time for 13-14 girls in the event.

Smith and Hoffer continued their dominant performances this morning by establishing themselves as the number 1 seeds in both the 100 fly and 100 back going into tonight’s finals.  Hoffer, while quite a bit slower than his best times, cruised prelims in order to conserve energy and perhaps crush more records tonight.  Smith, who has racked up experience in major competitions in a flurry with impressive showings at the 2016 Olympic Trials, U.S. Open, and two stops on the FINA World Cup circuit, has taken every swim as an opportunity to make history.  This morning she crushed the 13-14 NAG record in the 100 fly, bettering it by a full 0.75 to post a blistering 52.22.  Later in the 100 back Smith posted a 51.70, just missing the NAG record but taking nearly a full second off her best time, becoming the second-fastest-all-time for her age group in that event.

Alex Liang blew away the field, winning by more than 2 seconds.  Though not the leader after the first 100 yards of fly, Liang asserted himself over the backstroke and at the 200 was the only swimmer to turn in under 1:50.  Over the breaststroke he extended his lead and conceded nothing in the freestyle.

Interestingly there was a tie for 3rd place between Caleb Aman of Lane Four Aquatics and John Thomas Larson of Edina Swim Club.  Larson had the fastest final 50 of the field by far, splitting a blazing 24.46 to finish the race strong.

Though the race was close, Regan Smith, now dubbed the “Riptide Rocket,” took command early and never up the lead, despite a tough race from Eva Merrell, the only other swimmer in the field to clear 52 seconds. Regan Smith‘s swim was phenomenal on every level. For the second time today Smith lowered the NAG record for 13-14 girls in this race.  Her 52.22 this morning cleared the previous record by 0.75 of a second (previously 52.95).  After the swim tonight, Smith has now lowered the NAG record in the 13-14 girls 100 fly by 1.22 seconds.

Smith’s swim tonight also ranks as the 2nd-fastest swim for all 15-16 girls (Smith will be 15 in February), and it would be the 11th-fastest for all 17-18 girls.  Smith still has the 100 backstroke tonight, after barely missing the NAG record in that race this morning.  Given her massive time drops in the butterfly tonight, as well as her massive drop from prelims to finals in the 200 IM last night, it’s probably safe to assume Smith to continue breaking NAG records and making history.

As expected, Ryan Hoffer defended his title in the 100 fly tonight with a dominating performance in the 100 fly.  Barely missing his own meet record set last year, Hoffer brought the hammer down with his amazing underwaters and won by nearly 2 seconds.  Hoffer took the race out in blistering speed, turning in 21.18 at the first 50, though he was not quite fast enough on the second half of the race to clear his own record from last year.

As astounding as Hoffer was in the race, Andrei Minakov of Terrapins Swim Team swam the 2nd-fastest 100 yard fly by a 13-14 boy, clocking a blistering 47.78 to take 4th.

Leading from start to finish, Samantha Shelton won the women’s 200 freestyle with a dominant 1:44.95.  The 16-year-old was closely followed by Julia Cook of the hometown Aggie Swim Club.  Shelton and Cook were comfortably ahead of 3rd-place finisher Melissa Pish who touched in 1:46.08.  Another notable performance in this final came from 14-year-old Ella Ristic, also of Mission Viejo.  Ristic clocked a blistering 1:46.78.

Bryce Mefford, who we know is no slouch, finished in 8th place in an uncharacteristic 1:48.93 after posting a 1:37.50 in morning prelims.

Zoe Bartel crushed the field in the women’s 100 breaststroke tonight, winning by 1.5 seconds and clocking the only sub-minute time in the field.  Bartel took out her first 50 in a 27.88–the 2nd-fastest swimmer at the 50, Zhao, was a full second behind at 28.84–and conceded nothing in the 2nd half of the race.  At the Junior East meet, Alex Walsh set a new NAG record for the 15-16 age group with a 58.80.  It will be interesting to see how Bartel and Walsh can push each other to keep chipping away at the breaststroke records in the future.

MJ Mao‘s trip from Hawaii to the mainland was definitely worth it tonight as he took the title in the men’s 100 breast with a blazing 53.98.  Mao led the race from start to finish, though was out-split by both Roy and Beckes on the 2nd 50 of the race.

To no one’s surprise, Regan Smith destroyed another NAG record in the 13-14 100 back, and became the 13th-fastest American woman in the event.  Ever.  Remember, Regan Smith is only 14-years-old–a mere freshman in high school who doesn’t lift weights and is barely rested for this meet.  Well, Smith was sick last week, so unless you consider that rest–yeah, watch out world, Regan Smith has arrived.

Is there more to say about Smith?  Certainly.  But Smith was, after all, one of 8 swimmers in that final, all of whom posted impressive times.  Julia Cook, after taking 2nd in the 200 free, got up and took 2nd again in the 100 back in a blistering 52.47.  Grace Ariola nearly cracked the 53-second barrier, and in 8th place was another 14-year-old, Nicole Oliva, with a very impressive 54.45, which is actually slower than the time she made this final with (54.05).  Tomorrow Smith will swim the 200 fly and the 200 back, but she’s finished for tonight.  We all look forward to what she will do tomorrow.

Ryan Hoffer defended his title in the 100 back, clocking a 46.27 to win by nearly a full second.  While a ways off his best time from last year of 45.4, Hoffer was still dominant, especially underwater, where he always blows away the competition.

Bryce Mefford finished in 8th place with a 58.67 after going a 48.33 in prelims.  It appears Mefford was only swimming for team points and not actually for a time.

Going a 58 is not swimming to score points

Anyone know what happened with Bryce Mefford? If he was really only swimming for team points he would have tried to beat a couple guys in his final…

Bryce got the Norovirus, swam to get his relay only teammate a swim (rather than taking the medical scratch)

Another 3rd for Shaine Casas. Now two 3rd a 4th and a 5th. Not bad for a kid who currently is only training high school.

Seems very likely that Hoffer has been focusing much more on his freestyle above the water as it looks like his fly and back times have stagnated from last year. I hope this means he has an incredible 100 free in store for tomorrow!

13th fastest US girl ever in the 100 back. 4th race of the day at full speed. I know we recover very quickly at that age but that’s crazy impressive.
Next year she breaks the minute.
That generation of US juniors is really insane. You are lucky.

The girl is on fire!

Three golds and a bronze so far, Ft Collins is having a great meet.