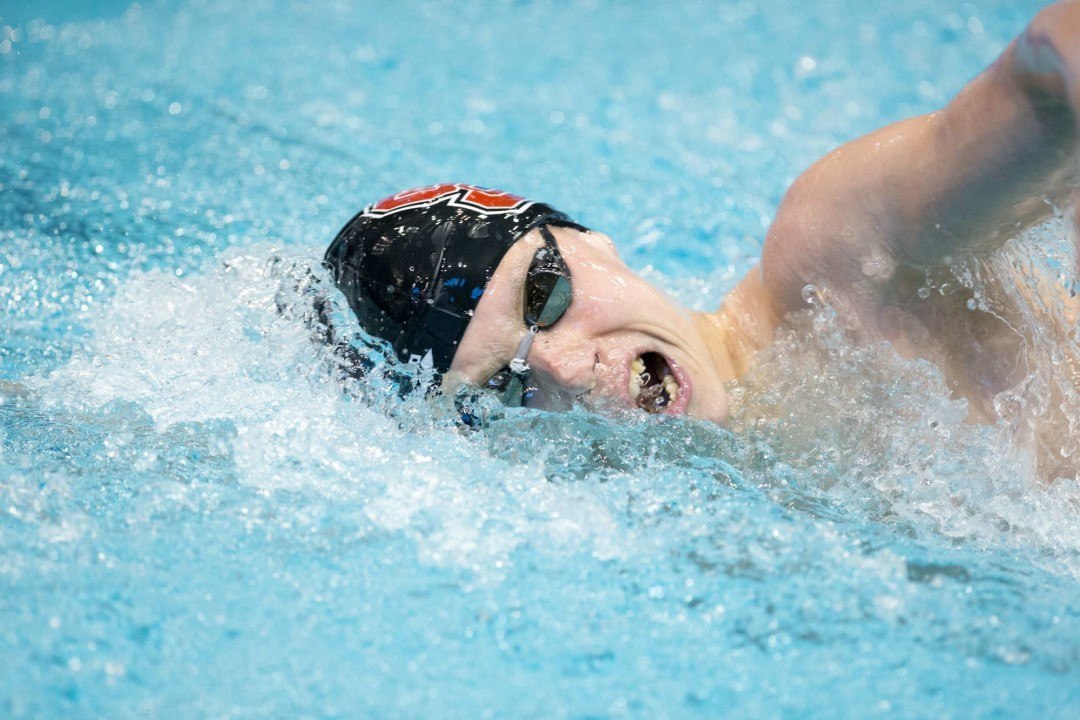 The first night of finals at the 2016 NC State GAC Invitational kicked off with the 200 free relays. On the women’s side, UNC raced to victory in 1:28.19 ahead of NC State’s 1:29.01. On the men’s side, however, it was NC State that came out on top, with Ryan Held leading off in 19.09 to help the team to a 1:17.94 victory. There’s an issue with most of the other splits in the results, so we’ll update with more splits if that gets fixed.

In the 50 free, UNC’s Caroline Baldwin broke up the NC State sweep of individual races, swimming to victory with a 21.98 with the only sub-22 on the women’s side tonight. NC State’s Ryan Held popped another 19-low to win the men’s race, touching in 19.17.

NC state has crazy depth in every event. I’m starting to doubt Texas’s “guaranteed” title being so “guaranteed”

State’s sprint events outside of Held are weaker than they were a year ago though. It’ll take strong relays for State to contend.

3/4ths of their sprinters are back from last season they’re just not swimming as fast yet. Hopefully McGlaughlin and/or Johnson have some big drops at the end of the season.

Bilis is a big loss though. I agree with Paul about Dressel but not about NC States title chances. Wait until Texas has their invite and let’s see what happens.

To be clear, i wasn’t saying NC state is suddenly a huge title contender. I’m just saying Texas’s chances of winning have gone from 99.9% down to maybe 95%

If texas’s chances have dropped, it isn’t because of NC State; it’s because of Cal.

they don’t rest too much mid-year, I’m sure they’ll be ready to go when it counts. but as stated below, losing Bilis is big for the 200-400 free relays

Where did he do these times ?

Texas hasn’t exactly looked great so far, but maybe they’re working uber hard, as in harder than they have before. Also Licon seems to be injured. I still think they’ll win just because of how last year they had a “mediocre” meet and still blew everyone away.

If they don’t win it then who will? They’ve got too much depth in too many events to lose

That Held guy is quite quick

Held NCAA predictions anyone? 18 something at least, I don’t know how low he can get down. Dressel still the favorite, I know it’s a post Olympic year and it’s a huge ask but… 17.99 please XD

Out of topic. But why is nobody covering the Georgia Tech Invite¡

Exactly. Dressel is not swimming at this meet.

For a guy that’s gone 18.2 and won Olympic Gold?
Keep in mind he was 18.7 last fall as well. Dude is on a different planet than the rest of the NCAA.

I saw the same thing. Going back to some interviews in late 2015/early 2016 with Gregg Troy, he made it clear that Dressel is extremely talented and hard-working across all four strokes, but his freestyle is what stood out the most and that’s what they focused on for the 2016 Olympic cycle. He also stated that afterwards they would be developing him into a more all-around guy, which can be seen in that in-season 1:42.77 2IM shortly after an 18.7.
I think they’re going to do continue to do really good job of developing Dressel into a multi-event threat over the next two years, while keeping his sprint freestyle up. His versatility and strength through multiple events is going… Read more »

Dressel is not swimming at this meet.

Small but important typo point – paragraph 2, other swimmers under 2:20 for the 500? Perhaps 4:20 instead? Thanks for the great article otherwise.

Thanks for pointing that out Coach, it’s been corrected.