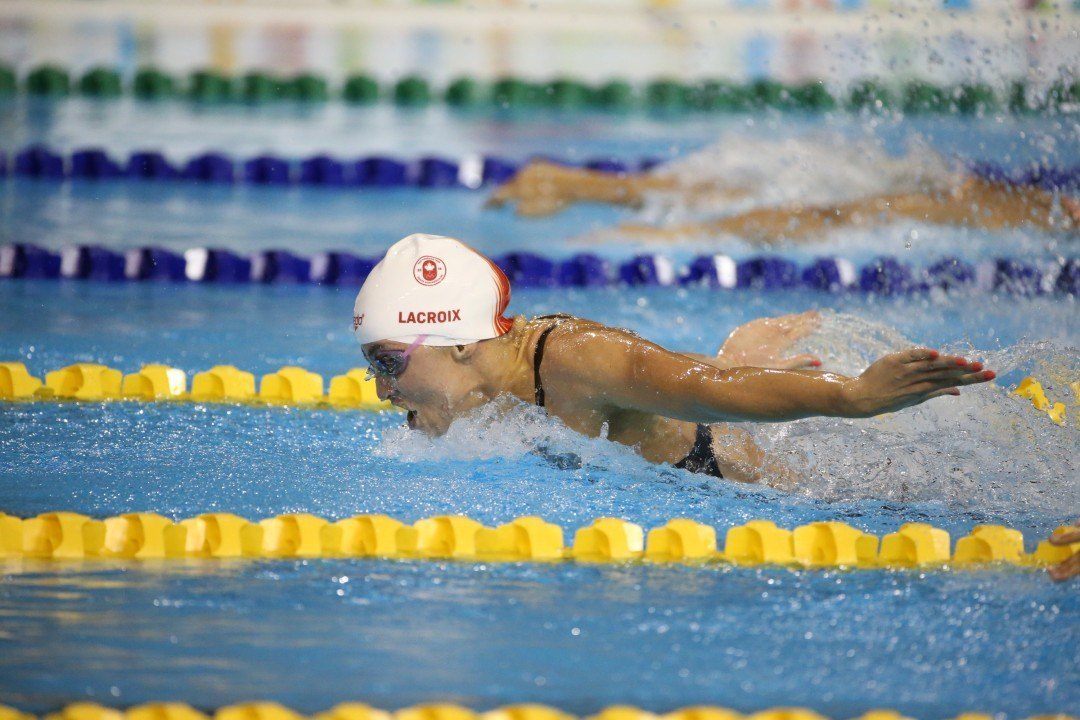 Canada has the potential to put multiple swimmers in both the 100 and 200 fly finals at the 2016 Olympic Games in Rio, the question is, who will they be? Katerine Savard, Noemie Thomas, and Penny Oleksiak look to go head-to-head in the 100 whereas the heavy favourite Audrey Lacroix will have to defeat Emily Overholt for her spot on the team. Archive photo via Chris Tanouye/www.Chirstanouye.com

Canada has the potential to put multiple swimmers in both the 100 and 200 fly finals at the 2016 Olympic Games in Rio, the question is, who will they be? Katerine Savard, Noemie Thomas, and Penny Oleksiak look to go head-to-head in the 100 whereas the heavy favourite Audrey Lacroix will have to defeat Emily Overholt for her spot on the team in the 200.

Katerine Savard had a very strong showing last summer internationally which ended with her ranked seventh overall in the word at the end of the season with a 57.52 performance.

With a fifth place finish at the World Championships Savard just missed the podium by 0.21 seconds. Her Canadian record of 57.27 would have secured her the bronze behind world record holder Sarah Sjostrom and silver medallist Jeanette Ottesen of Denmark.

At the Pan American Games, Savard finished with three medals including a bronze in the 100m butterfly. Coming in second just ahead of her was her fellow Canadian Noemie Thomas.

The back-and-forth battle between these two could be the storyline heading into the 100 fly final at these Canadian trials. Thomas has been great all year, hovering around the 58-second mark. With a very strong collegiate season with Cal, Thomas looks to have some very serious speed heading into trials.

At the PAC-12 Championships Thomas swam a 51.15 100 yard fly which translates to a 58.17. That time is almost identical to what she’s swam this year in the long course pool. In Minneapolis earlier this season Thomas swam a 58.23 to put up the 16th best time in the world this season.

Her rival, Savard, is sitting at the 14th spot with a time of 58.15 that she swam about a month ago in Marseille.

While these two have gone head-to-head for the last two years in this event, this time around there will likely be other athletes in the mix that can dethrone them. The talk of the town in the event his hometown favourite, 15-year-old Penny Oleksiak.

Oleksiak enters with a 58.44 seed time, a time she swam at the 2015 Speedo Eastern Canadian Open in Montreal this February. That time ranks her 20th in the world this year, a very impressive feat for a 15-year-old.

While she enters this race as the underdog, she has just as good a chance as either Savard or Thomas to make the team.

Oleksiak will have her hands full with the likes of Savard and Thomas, but she’ll also have to take down Samantha Corea who enters with a 58.83 seed.

Audrey Lacroix and Jacomie Strydom will both be in the mix as well in an attempt to overthrow the order, and pass both Oleksiak and the two leaders.

Audrey Lacroix will be looking for her final Olympic birth in the 200m butterfly as the top seed and best Canadian medal hope in this event. For the past two summers Lacroix has won an individual international gold starting with the 200 fly at the 2014 Commonwealth Games and the 200 fly at last year’s Pan American Games.

Lacroix made the switch just before Pan Ams to train in Toronto where she has stayed for the 2015-16 season in preparation for the Olympic Trials.

Second seed Emily Overholt comes in as a wildcard. She’s had plenty of success, and her IM prowess shows that she has versatility and can swim any stroke at a fast pace.

With a 2:10.75 seed time, she’s going to need to drop a sizable amount in order to get under the FINA ‘A’ time even if she is able to finish second to Lacroix, or even touch the wall in front.

Seeded third is Katerine Savard, more known for her 100-speed. Savard can’t be counted out in any butterfly discipline and is therefore right in the mix with Lacroix and Overholt.

Lacroix is the fastest Canadian this season after putting up a 2:08.62 in December. Savard’s second this season, Strydom is third. Overholt’s 2:16.61 from Minneapolis is her best time this year.