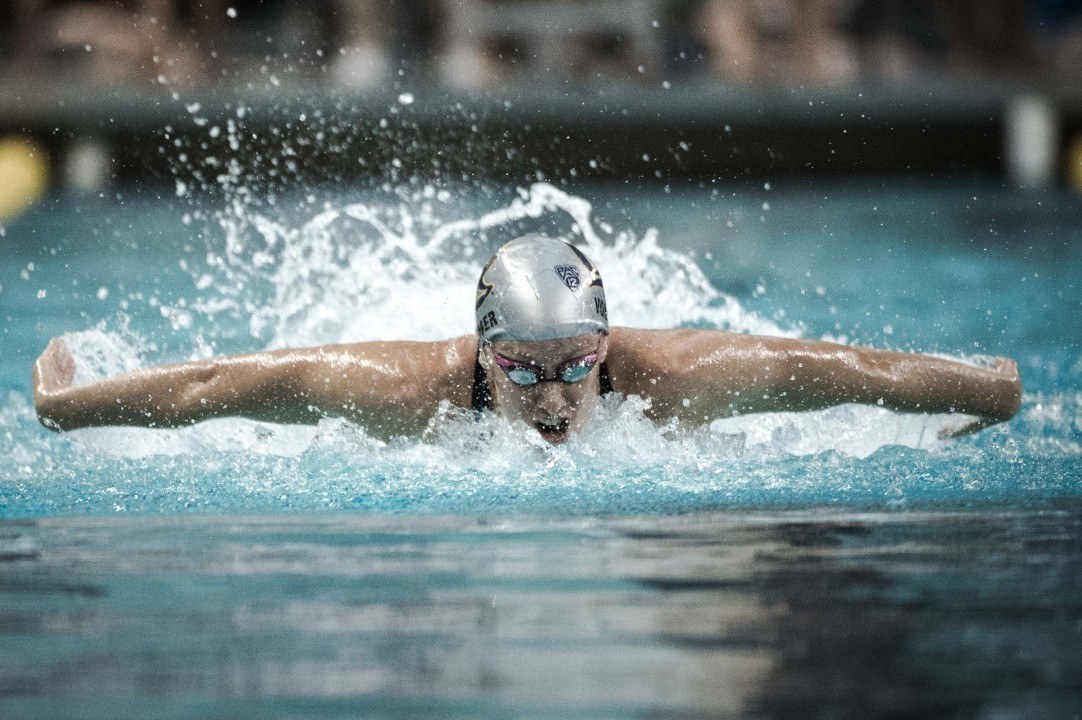 Dana Vollmer is scratching the women's 200 free final on Day One at the Arena Pro Swim Series at Mesa in order to concentrate on the 100 fly later in the program. Archive photo via Mike Lewis/Ola Vista Photography

Both Dana Vollmer of Cal and Ella Eastin of Stanford have scratched out of the women’s 200 free final on Day 1 of Mesa. Vollmer qualified for the B final with the 15th-fastest time of the morning session, 2:01.07. It was the first time she had swum the event from a flat start since 2012 U.S. Olympic Team Trials so now she has a current time. Vollmer has won two Olympic golds as a member of Team USA’s 4×200 free relay. However, she is also the reigning Olympic gold medalist in the 100 fly, and that event is eight heats later. Vollmer is seeded second in the fly behind Kelsi Worrell. Worrell went 57.56 in prelims, just .31 off her seed time. Vollmer, who is the American recordholder with 55.98, put up a 58.03 in prelims to win her heat by a body length. Volmer won AT&T Nationals in December with 57.95 and was 57.61 a month later at Arena Pro Swim Austin when she finished second behind Sweden’s Sarah Sjostrom.

Eastin, meanwhile, who didn’t even have the Mesa qualifying time for the 200 free in meters, took nearly 10 seconds off her year-ago time of 2:10 to wind up 16th overall with 2:01.10. She nabbed an Olympic Trials cut and came within .17 of her lifetime best from the summer of 2013. Eastin has only been under 2:10 nine other times in her career. Her real focus is the 400 IM, in which she is seeded second behind Katinka Hosszu. Eastin went 4:42.88 in prelims for her second-best morning swim ever. She is fresh off a record-breaking tear at the 2016 NCAA Division I Women’s Championships, where she won both the 200 IM and 400 IM and destroyed her personal-bests along the way.

With Vollmer and Eastin out of the 200 free, Stephanie Peacock of Mission Viejo and North Baltimore’s Becca Mann move into the B final. Mann is also in the A final of the women’s 400 IM, seeded third behind Hosszu and Eastin with 4:43.32.

Andrew Seliskar of California Aquatics opted out of the men’s 400 IM after finishing third out of heats with 4:26.41. Already a 4:21 in Austin in January, Seliskar chose to focus on the A final of the men’s 100 fly. There he is seeded seventh with a 53.78, less than a second off his lifetime best of 52.81. Alpkan Ornek also scratched the 400 IM. Seliskar’s absence moved Nolan Tesone of Louisville into the A final, while Ornek’s scratch allowed Nitro’s Nicholas Milikich into the B final.

I didn’t realize Dana Vollmer had swum the 200 free prelims before her 100 fly prelims in 58.03.
Really a good sign of her overall shape progression.
The final against Kelsi Worrell should be very interesting and will be a preview of the trials.