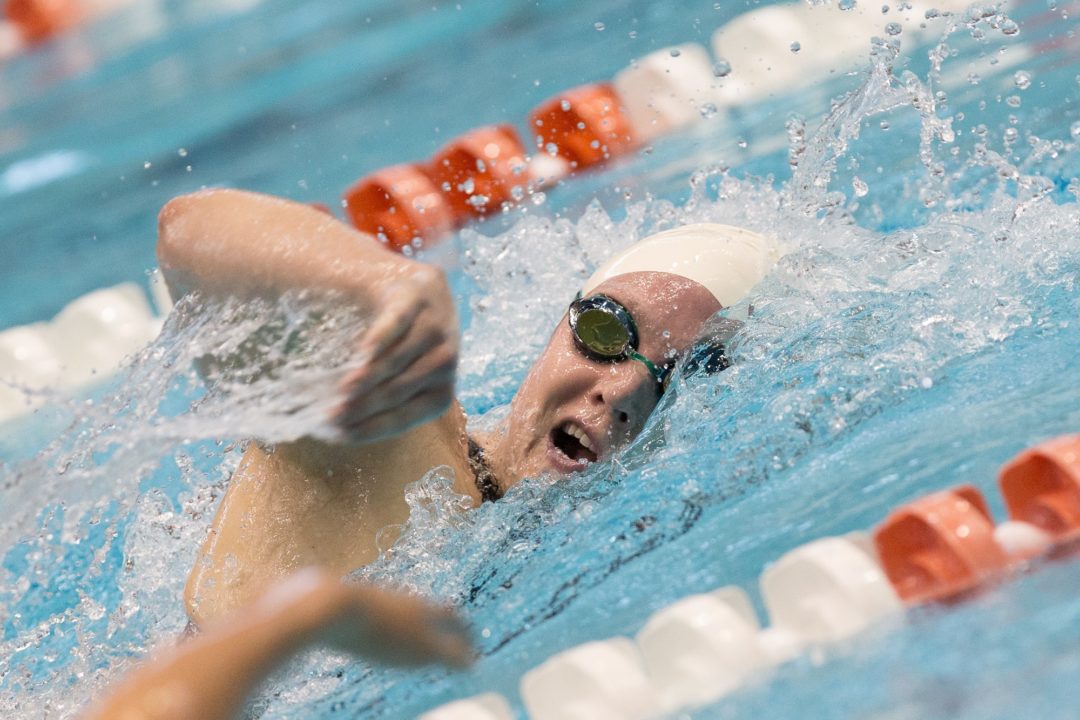 Lindsay Vrooman won the first of two individual gold medals for the United States tonight with a win in the 800 free.

After an exciting week, this will be the last night of pool competition for the 2015 World University Games.  As such, all eight races tonight will be for medals, and all will be exciting.

The most exciting, however, may be the men’s 50 free, where Brazilian Henrique Martins will be racing for his third individual gold medal of the week, after already taking the victories in the 100 free and the 50 fly.

At almost the other end of the speed spectrum American Josh Prenot will also be in the hunt for his third individual gold.  He won both the 200 breast and 200 IM this week, and he’ll be in lane 7 tonight in the men’s 400 IM.

Rozaliya Nasretdinova of Russia won her first individual gold of the meet with a 24.91, the only swimmer under 25.0.  That time puts her in the top 20 in the world this year.  Her teammate Eilzaveta Bazarova picked up the silver medal with a time of 25.05.  Holly Barratt of Australia touched third in 25.08 to win her third different medal this week, each in a different stroke.  Each of the medalists recorded a new personal best in the event.

Yauhen Tsurkin of Belarus spoiled tonight’s first attempt at three individual golds this meet.  It looked like Brazilian Henrique Martins had the lead in the final meters, but Tsurkin got his hand to the wall first to win, 22.22 to 22.24.  The 22.18 that Paul Powers (USA) swam in semifinals would have won gold if he had repeated that time in finals, but the 22.34 he swam tonight still earned him the bronze medal.

Mariia Liver won the first medal for the Ukrainian women this week, as her 30.73 was good enough for gold, despite being slightly slower than her time for the semifinals.  Ireland’s Fiona Doyle earned silver with a time of 31.09.  Just behind her were Italy’s Martina Carraro and Emma Reaney (USA), who ended up tying for bronze with 31.11.

The results had Lilia King (USA) with the fastest reaction time, but her 32.15 was over a second slower than she swam in semifinals, presumably due to a problem with her start.

This race went back and forth a couple of times, as top-seeded Yilin Zhou (China) touched first at the 50, but Italy’s Alessia Polieri fought back and led for the middle 100.  Zhou put it into another gear over the final 50, outsplitting Polieri by over a second to take the gold, 2:07.69 to 2:08.66.  That swim puts Zhou into the top ten in the world this year.

Hali Flickinger (USA) actually had the fastest split in the final 50, and used that to run down Stefania Pirozzi of Italy to win the bronze by a healthy margin, 2:08.80 to 2:10.41.

There have been five events so far tonight,  and now five different countries have won gold.  After winning three bronzes in a row, the USA earned its first gold of the night thanks to a new personal best by Lindsay Vrooman, who had the top seed coming into the meet.

Vroomon took over the lead from Martina De Memme of Italy at the 200m mark, then held off another Italian, Martina Caramignoli, to win in a time of 8:26.67.  That swim puts her in the top ten in the world this year.  Caramignoli earned the silver medal and was visibly excited, as her 8:28.43 was the first time she’s been under 8:30.

The USA swept the medals in the final individual event, as Jay Litherland ruined teammate’s Josh Prenot’s bid for his third individual gold medal this week.  Litherland swam a balanced race, never holding the lead until the final 50m.  Prenot had his normal big back half, as he went from sixth to second on the breaststroke leg, but Litherland split 56.42 on the freestyle to surge ahead and win gold out of lane six in a time of 3:12.43, the fourth-fastest time in the world this year.  That’s also only .43 off the meet record, set by Michael Weiss of the USA in 2013, and a personal best for Litherland by 2.5 seconds.

Keita Sunama of Japan went out hard and almost hung on.  He was in lead for the first 350m of the race.  He and Prenot were side-by-side in lanes seven and eight, and Prenot ended up taking the silver in 4:13.15, also a lifetime best, while Sunama picked up bronze in 4:13.98.

In what may be the biggest upset this week, Italy spoiled the USA’s attempt to sweep the relays at this meet.  Italy pulled ahead on the first 50 of the fly leg, en route to Elena Di Liddo splitting a 57.09, and Laura Letari held off Yui Yamane of Japan and individual 100 free gold medalist Shannon Vreeland of the USA to win the gold.  Italy touched in 4:00.50, Japan in 4:00.60, and the United States in 4:00.75.

In another thrilling race, Russia won its only relay gold medal of this meet.  It’s not quite as easy to call this one an upset, as Russia did have the fastest time in prelims, but few fans would have predicted the USA would not earn a gold medal in either relay.

Japan’s Junya Hasegawa set the pace in the backstroke leg, touching in 54.18, and Japan stayed in first place through the breaststroke and fly legs, with Russia behind by .16 and the USA by .79 going into the freestyle.

Notably, Evgeny Koptelov of Russia, Matthew Josa of the USA, and Masayuki Umemoto of Japan all had 51-point splits on the fly leg.  Josa’s swim and Conger’s sub-48 anchor make it hard to argue that the US definitely would have been better off with Conger on fly and Seth Stubblefield on free, despite Conger having the 4th-fastest time in the 100 fly this year.

Australia placed 4th in a time of 3:36.12, highlighted by Justin James having the only other sub-48 freestyle leg of the event, a 47.98.  Craig Benson of Great Britain swam a field-leading 59.98 on the breaststroke leg en route to fifth-place time of 3:48.02

France’s relay was disqualified, apparently for an early takeoff by Jordan Coelho on the fly leg.

Conger isn’t quite lezak but will be an asset in the 4×1 free relay next summer. Dressel, conger, stubblefield, powers and even Murphy could really help the aging squad.

This Litherland triplet is quite interesting. For how many nations could these guys swim?

I’m pretty sure they have a citizenship to Japan, U.S., and New Zealand

Here’s to hoping, once and for all, Ye won’t be judged ever again based solely on her freestyle split in London. It was shocking, yes, but so are so many other performances. It’s all about race strategy, and hers and Lochte’s had nothing in common that day. Or is anybody doubting Litherland and his 56.42 impressive split?

Ye shiwen’s split is equal to a 53 mid imo, if you assume her overall time is comparable to phelp’s 400 im.

PVK, some swimmers are better at relays than individual swims. I think jack conger should be added to the US 400 free relay in Kazan.
Chris walker hebborn is also another swimmer who is very good in relays.

U are right Carlo , Conger seems to be a very good relay swimmer and he is allready doing very good at it . If he looked devastated twice , this is a good sign for him . He will be even more motivated to swim even faster .

Haha! He will not be added to the US roster for Kazan!
There are very strict rules in USA and they never change their roster at the last minute without injury or health problems.
You don’t qualify. You don’t swim! Even if you’re much faster this year than those who are selected. I’ve a few names in mind. 😆
The rules are the rules. USA picked its team last summer. That’s the choice of the American federation. It’s clear they don’t send their best team at worlds. I’ve a few names in mind. 🙂 But that’s the way it is every 4 years since at least 2002. Before, I don’t know. 2002 for 2003 worlds. 2006 for… Read more »

Even if he were added, I don´t know if he could keep a taper for the next few weeks…

Final medal standings in the pool

18 countries with at least a medal
And unfortunately but as expected, no medal for France.
Hopefully we will do better at worlds…. 🙂

France will do much better at worlds , i am sure BOBO . No worries .

Jean-Michel,
yes we will do better. Not hard.
I’m trying to be realistic, as always. 🙂
Manaudou in the 50 free is our best gold medal chance. Logically there are 99% of chances he wins that race but….
But he has never won gold at worlds so far.
Our other gold medal chances are the men’s 4X100 free relay even if Russia will be tough to beat at home, Manaudou in the 50 fly and Lacourt in the 50 back.
Other medal chances are Lacourt/Stravius for perhaps a bronze in the 100 back but it will be very tough and the men’s medley relay for a bronze medal behind USA and GB. Metella in… Read more »

I think Metella has a lot to give. Disappointing trials but big PB at the last Golden Tour Stop and swimming well in the Sette Colli as well, all whilst untapered. He’s also a strong relay guy, a la his anchor at SC Worlds. Look for a very solid swim from him in the relay.

Also Bobo I’m not sure whether you agree but his stroke seems to have gotten a lot smoother recently as well – found a video of him at Sette Colli heats and it’s a very smooth swim.

jack conger needs to give himself a break. He gave this meet his all and split under 48 not once, but twice. The rest will fall into place with time

I’ve again forgotten that “performant” didn’t exist in English.
Conger always gives everything in the relays and rarely disappoints. A great teammate.

But I expected much more from his 100 free in individual.
And I would have prefered to see him swim the 100 fly rather than the 100 back.
Perhaps at US nationals early August he will go faster?

Bobo- I’ve seen it used once or twice. Rarely though. Sometimes people say “more performant” when comparing things. Not people I talk to on a daily basis, but I’ve seen it in articles.