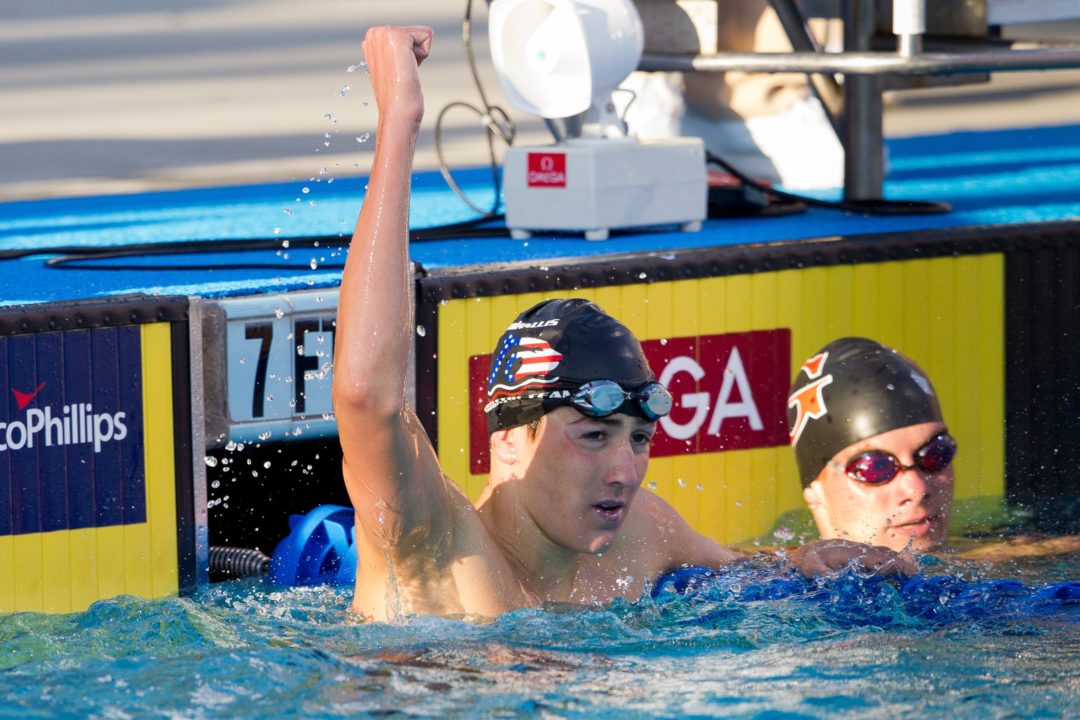 Jacob Pebley is the top seed in the men's 200m backstroke after posting the fastest time in the semifinal yesterday. Archive photo via Tim Binning/TheSwimPictures.com

After a light day yesterday with only three finals, the action picks back up again today with seven finals and multiple semifinal races. The full day six finals schedule can be found below:

Japanese distance swimmer Hirai Ayatsugu pulled away from the field, winning the men’s 1500 freestyle with the third fastest time in the world this year, 14:56.10. He was the only swimmer to break 15 minutes.

British swimmer Jay Lelliott was one position away from the podium with his time of 15:07.84.

Ukraine’s Mariia Liver leads the field after posting the fastest time of the two semifinal heats. She won the first heat, touching just ahead of American Lily King who was second with her time of 30.78 and Martina Carraro (ITA) in third with a 30.89.

The women’s 50 breaststroke final will be tight. The top five qualifiers all finished under 31 seconds during the semifinal. The two swimmers to break 31 seconds in the second semifinal heat were Matsushima Mina (JPN) at 30.83 and Emma Reaney (USA) at 30.97.

Piero Codia won the silver medal with the eight fastest time in the world this year, 51.69. Yauhen Tsurkin of Belarus secured the bronze medal and the final spot on the podium with his time of 52.12.

The second Russian swimmer in the field, Aleksandr Sadovnikov, finished fourth at 52.17 and Umemoto Masayuki (JPN) was fifth with his time of 52.29.

The two American swimmer, Matthew Josa and Matt Ellis, finished together in sixth and seventh. Josa was first to the wall at the 50 by a few tenths, but ran out of gas in the final 20 meters of the race. Josa finished with a time of 52.59, while Ellis went 52.67. Poland’s Michal Poprawa finished eighth at 52.93.

Holly Barratt of Australia was able to get her hand on the wall first to win the women’s 50 backstroke. She reached in for a final time of 28.04, winning the race by .34 seconds.

US Olympian Rachel Bootsma was knocked off the podium by her Cal Berkeley teammate, Stephanie Au. It appeared that Boostma was stuck on the lane line through her final 15 meters of the race. She finished fourth with a final time of 28.42. Canadian Kylie Masse finished not far behind Bootsma in fifth place with her time of 28.45.

The Italian swimmer, Arianna Barbieri, finished sixth just ahead of Camille Gheorghiu of France at 28.59 and 28.64, respectively. Yekaterina Rudenko (KAZ) finished in eight with her time of 28.75.

Shannon Vreeland won Team USA’s first medal of the day in the women’s 200 freestyle. She lead the final by a half second, touching the wall with a time of 1:58.38. Wang Shijia of China was the only other swimmer to break 1:59. She earned the silver medal with her time of 1:58.89.

American swimmer Jacob Pebley won the men’s 200 backstroke, swimming the fourth fastest time in the world this year. With his time of 1:56.29, he is now the fastest American performer of the season.

The silver medal was won by Japanese swimmer, Sunama Keita. He finished second with his time of 1:57.50, holding off the bronze medalist, Andrei Shabasov (RUS), who finished third at 1:57.68.

Christopher Ciccarese narrowly missed the podium after posting a final time of 1:57.83, only .15 seconds behind the bronze medalist.

There was a gap before the next group finished. Joe Patching of Great Britain lead in Giorgio Gaetani (ITA) and Connor Green (USA). Patching posted the fifth fastest time of 1:59.52 while Gaetani finished sixth in 2:00.07 and Green was seventh in 2:00.23.

American sprinter Paul Powers will be the top seed heading into finals after winning the second semifinal heat with a time of 22.18. The second semi-final heat was much faster that the first. The top six swimmers from heat two qualified for finals, while only the top two from the first heat qualified.

Joining them in finals will be Ivan Kuzmenko (RUS), Giuseppe Guttuso (ITA), Yonel Govindin (FRA), Seth Stubblefield (USA), and Filip Wypych (POL). The top 8 swimmers all finished between 22.18 and 22.45.

The Bronze medal was won by Dimitry Balandin of Kazakhstan with his time of 27.47. Balandin has been slightly out of character this week as he typically does better in the longer breaststroke events. Despite not making the podium in his best event, the 200 breaststroke, he has finished third in the 50 breaststroke and he won the 100 breaststroke. His best 200 time of 2:07.67 is the ninth fastest swim in history, but he was more than four seconds off of that time this week.

Russia’s Kirill Prigoda finished fourth with his time of 27.70 and DJ Macdonald of the United States finished just behind him in fifth with a 27.84.

China’s Zhou Yilin qualified for the final of the women’s 200 butterfly with the fastest time out of semifinals. She touched the wall in 2:08.48, recording the 15th fastest time in the world this year.

Italian teamamtes Stefania Pirozzi and Alessia Polieri finished first and second in the fist semifinal heat with times of 2:09.11 and 2:09.26, securing their spots in finals.

Hali Flickinger of the United States had the fourth fastest time, finished second in the second heat with her time of 2:09.56.

Joining them in finals will be Barbora Zavadova (CZE), Jacomie Strydom (CAN), Yabu Misuzu (JPN), and Tina Rueger (GER). It took a 2:12.53 to advance to the final.

After winning gold in the women’s 50 backstroke earlier in the session, Holly Barratt (AUS) qualified for the final of the women’s 50 freestyle with her time of 25.18.

The two American sprinters, Abbey Weitzeil and Maddie Locus, tied in the second semifinal heat of the women’s 50 freestyle, touching the wall at 25.24.

Brigit Koschischek (AUT), Lauriane Haag (FRA), and Aglaia Pezzato (ITA) will advance to finals as well. It took a 25.41 to qualify for finals.

Australia finished second with their time of 7:13.04, holding off Japan to win the silver medal. Japan finished third for the bronze medal with a time of 7:13.12.

Wouldn’t it be nice to have 3 world semi final type times after thinking – yeah I might go for a swim again .

surprised conger didn’t get to swim the 4×200

The MightyConger must be mentioned in every thread .

Figured he would swim all the relays, since he ‘only’ did the 100 back and free..

Should have a pretty good 200 free since he has a great 2 fly and back.. And up til this season swam the 500 free

Performance of the day by pebley. After seeing Malone and Youngquist I think the us 4×2 free relay will be fine in Kazan

Am I looking at the time line for tomorrow morning correctly or is it a typo? It says prelims start at 8:30 PM (rest of the week has been is 7:30 PM). Can anyone confirm 8:30? There isn’t much on the agenda so might be right.

Henrique will need to improve at least 0.3 0.4 to challenge s relay spot. The guys will neee at least to put Oliveira as 7th cause he will go as 200 free and maybe even swim prelims.

Bad for him is that his best events are loaded to get an individual spot.

Will we really see a sub 22 tomorrow?

His first two kicks after pullout were correct – that is all we see underwater. Where did you see Whitaker-like kicks? I certainly cannot see anything from the top. I doubt he switched way he kicks after correct kicks from beginning.

About Baladin im not shocked. Hes probably not rested. Usually 200 breastrokers in this phase of training swim their best 50, swim closer to your best at 100’s and do not swim well the 200’s.
thaw very common if you see.

200 breastrokes need a good (doenst mean big) taper to adjust their stroke and body position, and also they need your legs rested for the pressure of the event.

congratulations for the Brazilian Swimmer Henrique Martins which is improving a lot and will challenge for a place in the 4 x 100 freestyle next year In Rio.