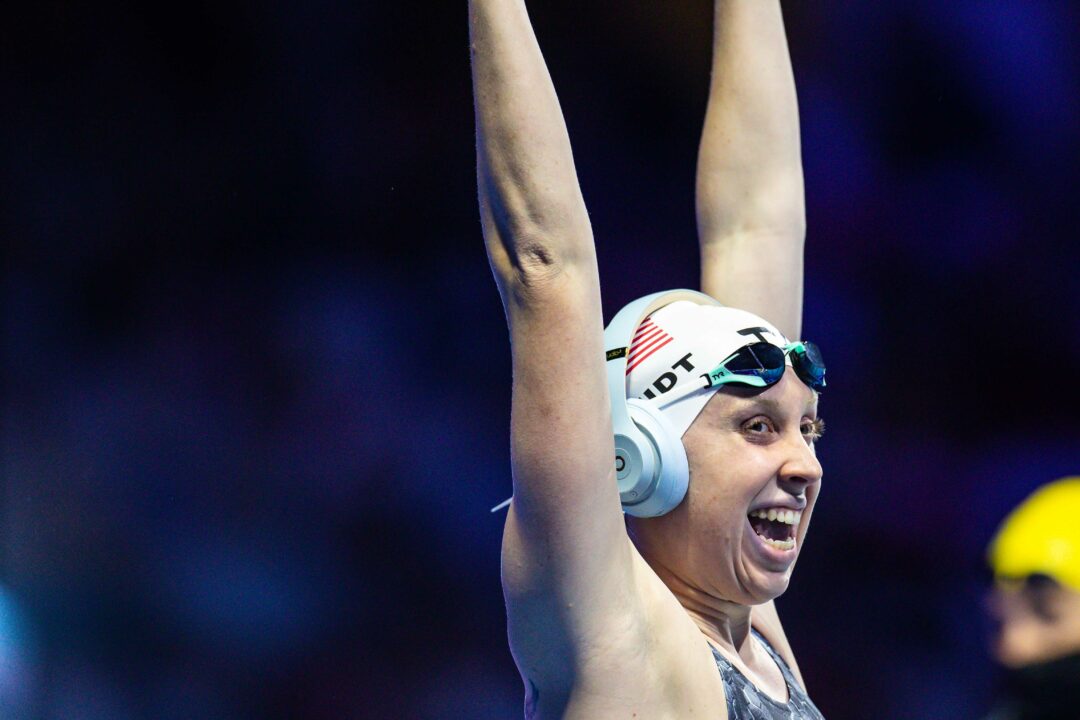 Sierra Schmidt, famous for her pre-race dance routines, will split training with her dad, Joseph, and the Scottsdale Aquatic Club. Archive photo via Jack Spitser/Spitser Photography

2015 World Junior Champion Sierra Schmidt has decided to continue her training toward Paris with the Scottsdale Aquatic Club.

So excited to announce that I will be joining @ScottsdaleSwim 💕 Everyone has been so accepting and it’s an honor to swim with such passionate coaches and swimmers! Here’s to another exciting adventure, and let’s go SAC!! 🌵🌵💪💪 #enjoythejourney pic.twitter.com/7goADOxRE0

In the run-up to the 2021 US Olympic Trials, Schmidt left her training group at the University of Michigan to return home to Arizona and train under her father Joseph Schmidt. The plan all along was to find a team to train with after the summer.

The popular guess was that she would resume training with Bob Bowman. She trained under Bowman at the North Baltimore Aquatic Club before headed to Michigan, and Bowman is now the head coach at Arizona State – not far from Schmidt’s home in Scottsdale.

But instead she’s found a new club at Scottsdale, which itself has a new head coach Andrew Nguyen. Nguyen took over earlier this year when Kevin Zacher left to become the head coach at the Santa Clara Swim Club.

SAC has produced a number of high profile swimmers and collegiate recruits, including 7-time NCAA Champion at Cal Ryan Hoffer.

Schmidt says that she’ll split time between training with her father, as well as Scottsdale coaches Nguyen and Bob Platt. Platt was formerly an assistant coach at Germantown Academy Aquatic Club during the heyday that included putting 4 men on the 1992 US Olympic Team.

Nguyen came to Scottsdale from the Bellevue Club Swim Team in Washington, which was one of that state’s top clubs.

Sierra Schmidt says she has been training with the team’s senior group, and has enjoyed that time.

“I am training with the team and have been really impressed with the energy and passion the athletes and coaches come into each practice with,” Sierra Schmidt told SwimSwam.

“While swimming Unattached was a necessary decision for me this summer, I found it to be incredibly lonely and really wanted to join a team where I could be a part of something bigger, which I found at SAC.

“Coach Platt’s experience and distance knowledge, as well as Coach Andrew’s passion and openness is really the perfect combination for me to push myself to the fullest.

“It’s also been a lot of fun working with up-and-coming high school swimmers, and witnessing their growth through this summer. I’m excited for the future, and am very excited to represent SAC this year at National Level meets!”

Prior to her career at Michigan, Schmidt already achieved international success. She won a gold medal at the 2015 Pan American Games in the 800 free. She also won the 2015 World Junior Championship in the 800 free, plus silvers in the 400 and 1500 freestyles.

After matriculating to Ann Arbor, she won bronze medals at both the 2017 and 2019 World University Games in the 400 free.

Her dancing is the most annoying thing I’ve ever seen an athlete do. 100% made me root against her at trials. Don’t @ me. You know it’s true.