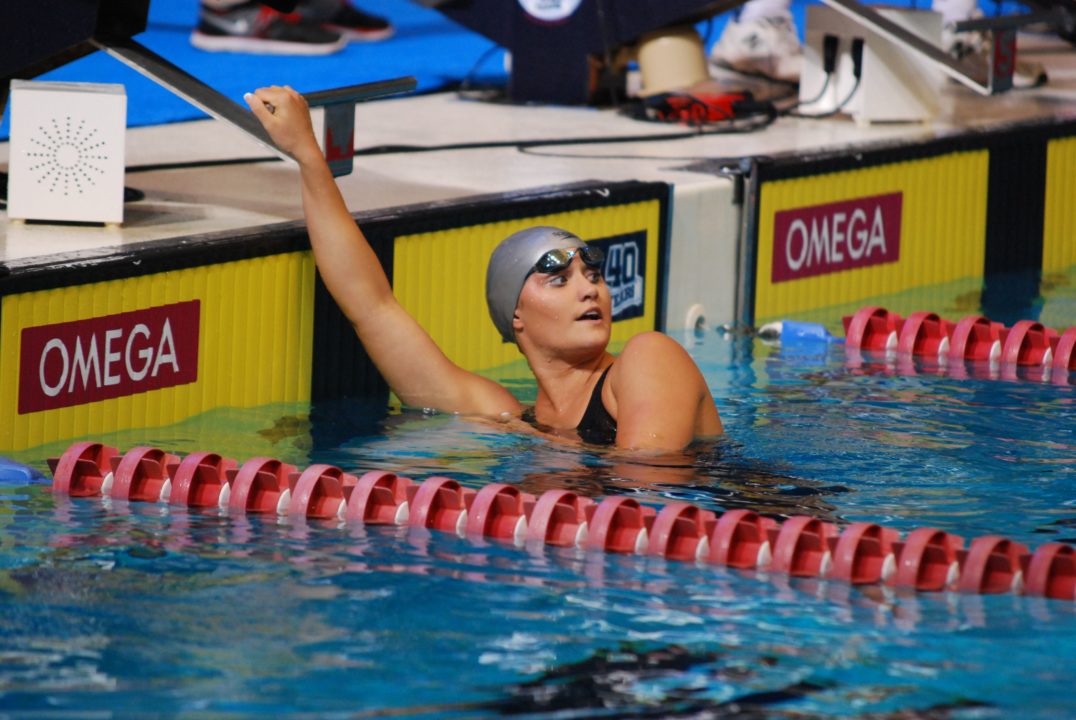 Elizabeth Pelton is the top seed in the 200 backstroke, an event which could see four or more swimmers under the 1:50 barrier. Archive photo via Janna Schulze/SwimSwam.com

Elizabeth Pelton is no stranger to the 200 backstroke, as she holds the NCAA, American, and U.S. Open records from her dominant performance to take the 2013 NCAA title. In that A final, she was the only swimmer under 1:50, and she was way under it at 1:47.84, taking the victory over big names such as Dominique Bouchard, 2012 Olympic bronze medallist Elizabeth Beisel, and then the 2014 NCAA champion, Brooklynn Snodgrass, who finished 7th in 1:52.12.

2014 was a different year, however, as Snodgrass was only 1:52 again in prelims, but pulled out a 1:50.52 to edge Pelton by three hundredths. Not very far behind the two was Virginia’s Courtney Bartholomew in 1:50.84, a swimmer who has come very close to a seemingly untouchable Natalie Coughlin NCAA record in the 100 back.

1:49.00. That’s Pelton’s seed time coming into this year, a little over half a second than her season best from last year going into NCAAs.

1:49.87. That’s where Bartholomew stands this year. Pelton and Franklin seem so unbeatable in the 200 backstroke, but that doesn’t mean much. This is the NCAA, and Bartholomew is certainly hungry for a backstroke title. Let’s say she sneaks under Coughlin’s 100 back record the day before; it might be enough to push her to challenge the elites.

Last year’s champion Snodgrass went from 7th her freshman year to NCAA champion last year, so continued progress for the Canadian star wouldn’t be a surprise. She’s never broken 1:50, but she has potential to get under and push the other three. Sinead Russell (Florida), Snodgrass’s country mate, was hospitalized earlier this season due to a cranial blood clot, and won’t be able to swim at this year’s NCAAs, though she would have been expected to make the A final once more.

Cal’s Melanie Klaren, Denver’s Sam Corea, and Auburn’s Jillian Vitarius were 6th, 7th, and 8th in last year’s A final, but there are a bunch of new faces that have put down faster times this season.

Among those new faces are four freshmen seeded 6th, 7th, 8th, and 10th going into the big meet. Clara Smiddy (Michigan) was the Big Ten runner-up in the 100 and 200 back to Snodgrass but took the 200 IM title. She’s a U.S. National Team member. Kylie Stewart (Georgia) gives the Bulldogs a possible A finalist in an event which they only scored two points in last year. She was an incredibly highly touted recruit, and was 1:49.85 just a year ago. She hasn’t looked that good this season, but she could definitely crash the top four party. Kennedy Goss (Indiana) didn’t swim this at Big Tens, but her best time would have put her just behind Snodgrass and Smiddy. Lisa Bratton (Texas A&M) is a talented backstroker from a very solid Aggie freshman group who should final, but might not yet have the firepower to sneak into the top 8.

Another new(ish) face is Danielle Galyer of Kentucky, who wasn’t under 1:54 last year but blasted a 1:50.95 to win the SEC title over big names like Hali Flickinger (Georgia), Bratton, and Stewart. She is almost four seconds faster going into the meet this year than last year, and has momentum after that conference crown. It doesn’t hurt that she’ll be joined in this event by freshman Bridgette Alexander, who is seeded 19th (1:53.41).

Another big scoring event for Cal in all likelihood… Georgia will pick up decent points here and I think Stewart will be in the 49 low/ 48 high range… Stanford definitely needs a scorer or two, even in the B to keep pace.

I think 7 will be under 1:50. Franklin, Pelton, Stewart, Smiddy, Bartholomew, Snodgrass and one suprise.